Low-level vorticity features of a long-lived classic supercell are studied using the NSSL Collaborative Model for Multiscale Atmospheric Simulation (NCOMMAS), a three-dimensional non-hydrostatic model containing ice microphysics. Horizontal grid spacing in the region of the supercell is 100 meters, stretching to about 250 meters towards the edge of the model domain. Vertical grid spacing ranges from 70 meters at the surface to 500 meters at the tropopause. The initial atmosphere contains 3500 J/kg of CAPE, and a quarter-circle hodograph with winds veering from the surface to 850 mb, shearing unidirectionally from 850 mb to 400 mb, and blowing at a constant velocity above 400 mb.

Four hours of model time are simulated and history files are saved every 5 seconds. Data are analyzed using three-dimensional raytracing techniques, Lagrangian parcel analysis, and traditional horizontal slices of model parameters including wind vectors. Animations of isosurfaces, particle sheets and bundles, and wind vectors are presented in order to elucidate the morphology of these of the low-level vorticity maxima which are found throughout the simulation.

Throughout the course of the simulation, vorticity maxima are found behind the leading edge of the gust front along the right flank. These features contain values of vertical vorticity (ζ) often exceeding 0.1 s-1 for minutes at a time. These vortices tend to originate below the main updraft near the point of occlusion where tornadogenesis is typically observed. Their formation typically coincides with a slight lowering of the cloud base and a small pressure deficit (no greater than about 7 mb). The stronger vortices exhibit a strong storm-relative rotational signature, while the weaker vortices appear as kinks in plots of low-level storm-relative winds.

Almost without exception, these vortices propagate away from the location of the main supercell updraft along the flanking line. At times up to six vortex maxima occur concurrently. Three-dimensional isosurface animations indicate that these vortices form from the ground upward and occasionally extend several kilometers in length. Preliminary Lagrangian parcel analysis suggests that vortex stretching below and along the flank of the strongest winds of the updraft precedes vortex strengthening.

Recent observational and modeling studies suggest that vortex features with similar characteristics to those found in this study may play a significant role in tornadogenesis. Vortex mergers and vortex stretching have both been suggested as mechanisms for tornadogenesis, and at 100 meter horizontal grid spacing these small, localized regions of vertical vorticity are plentiful in favorable locations during this simulated supercell.

While conclusions at the time of this writing are scant, our current data indicates that features on the scale of a few hundred meters in diameter may be plentiful during the evolution of supercell thunderstorms. Higher resolution simulations will indicate whether these features are properly resolved or whether smaller-diameter swirling features of large vorticity are plentiful in similar environments.

Click on the image below for a larger view. 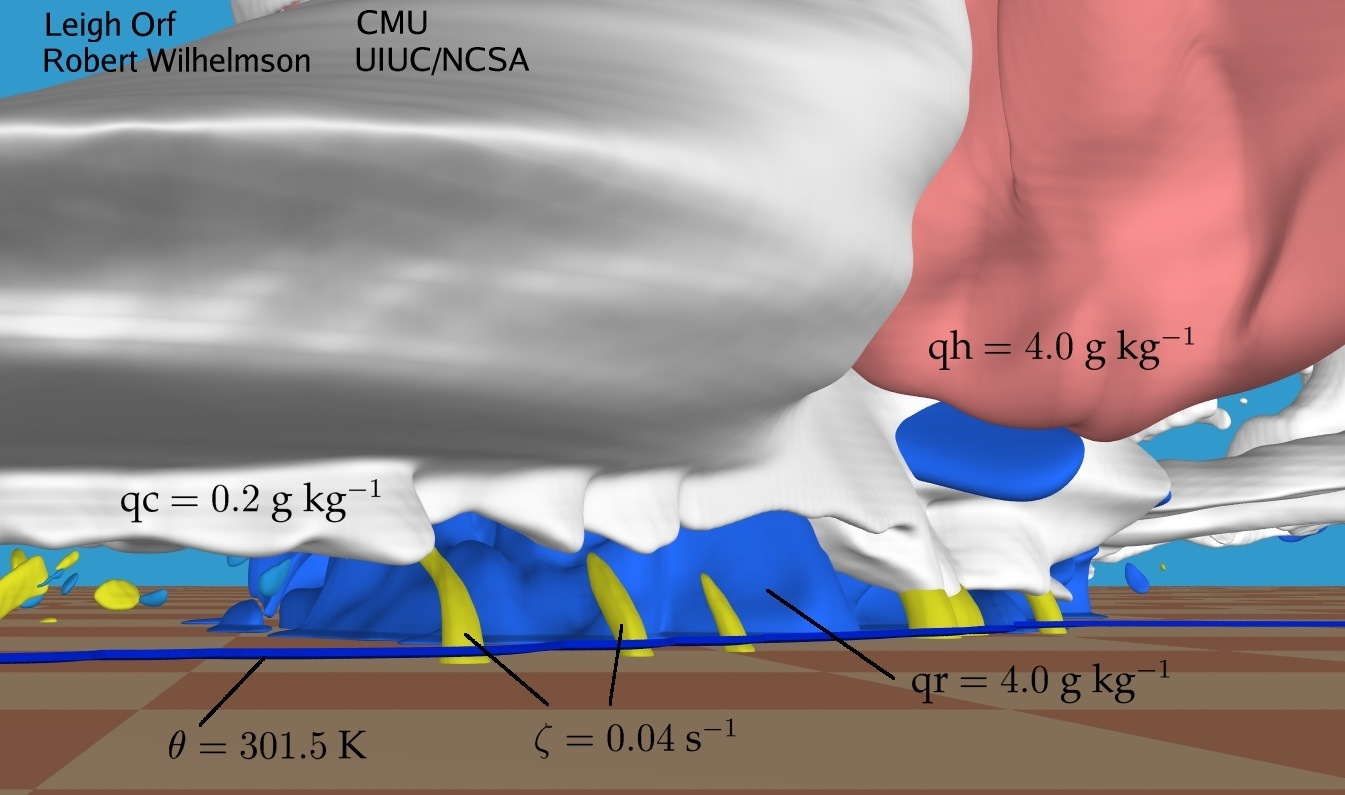