Since cloud droplet concentrations (Nc) depend on CCN concentrations (NCCN) and vertical velocity (W), multiple regression analysis (MRA) is applicable. In MRA a dependent variable, Y, is influenced by, X1, X2,XP  that are multidimensional, i.e.,

coefficients a, b1, b2,, bp and R2, are obtained by solving multiple equations based on multiple data (n) consisting of parameters Y, X1, X2Xp. Data (n) must exceed inputs, p. Y is Nc and X are NCCN at various supersaturations, S, (e.g., N1%, N0.6%, etc.) and eventually W. Coefficients (a, b1, b2,..., bp) then go into (1) for each datum; predictions of Y are calculated and compared to measured Y and linear regression R2 is calculated.

Higher regression improvements are not as good for additional inputs that are correlated with variables already applied.

Single, double and higher regressions are illustrated in a and b of Fig. for wintertime Caribbean small cumuli (RICO) where R2adj of NCCN (cumulative; critical S, Sc < S) and W with Nc are plotted against S. Black are single regressions, NCCN-Nc. Red are double regressions that add W as input. Green are regressions of NCCN at all S between 0.02% and abscissa S. At S = 0.02% green are single regressions identical to black (N0.02%-Nc).  Toward the right green show increasing NCCN regressions; at S = 0.04% green are double regressions (N0.02% and N0.04% with Nc); at S = 0.06% green are triple regressions (N0.02%, N0.04% and N0.06% with Nc); at S = 1.5% green include 10 NCCN with Nc.  Blue correspond to green as red corresponds to black; i.e., blue adds W to corresponding greens.  At 0.02% blue are double regressions (N0.02% and W with Nc) identical to red.  Blue includes increasing quantities of NCCN toward the right that also include W.  At far right blue are 11-fold regressions.  Contrasts between a and b demonstrate differences between more adiabatic cloud parcels (b) and averages of all low-altitude clouds (a). N0.6% has the highest single and double R2adj (black and red). Results: (1) lack of R2adj improvement by addition of W (compare red with black and blue with green), (2) significantly higher R2adj of multiple regressions over single and double regressions (compare green with black and blue with red), (3) limited improvement for b over a indicates that entrainment only marginally perturbed NCCN-Nc relationships.  This extends the effect of NCCN on cloud microphysics, which bolsters the indirect aerosol effect. Analogous figures for ICE-T (summertime Caribbean cumuli) and POST (California stratus) show similar results.

MASE (polluted California stratus) suffered from negative NCCN-Nc R (black panel c).  Nevertheless, when NCCN are combined with standard deviation of W, σw (R= 0.51 for σw-Nc) there are positive regressions with maximum R2adj of 0.43 at S = 0.20%, red. That higher S NCCN do not improve R2adj is consistent with the low MASE cloud S due to lower W of stratus and high MASE NCCN that further suppress cloud S to where CCN spectra are steeper, which provides greater importance to W variations than NCCN variations (Twomey 1959).

Lack of W effect on ICE-T and RICO regressions is consistent with Twomey (1959); higher cumuli W cause higher cloud S where typical CCN spectra are less steep, which favors NCCN variations over W variations for determining Nc. Nonetheless, W is not irrelevant because within flights, where NCCN is less varying, Nc is positively related to W. But NCCN variability among flights was greater than W variability among flights; sd/mean of N1% 0.49 compared to 0.36 for sd/mean of W in ICE-T and 0.34 compared to 0.22 for RICO. This is consistent with the greater NCCN-Nc than W-Nc correlations and the limited improvements when W is included in the multiple regressions of cumuli flight averages. 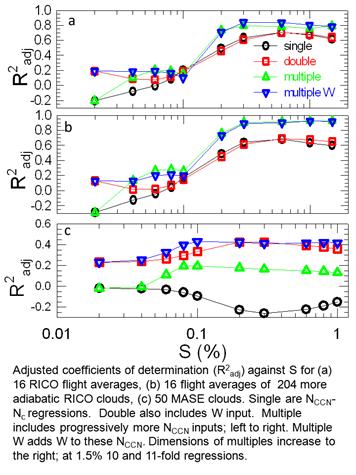