Clear air aerosol spectra often display modes that have been attributed to cloud processing. Especially for bimodal distributions the sizes at the minimal concentrations between modes were used to infer effective supersaturations (Seff) of nearby clouds (Hoppel et al. 1986). With particle composition assumed this Hoppel minimum diameter was converted to critical S, Sc by using particle solubility (κ) of that compound. This was based on the principle that lower Sc particles preferentially produce cloud droplets. Cloud processing then proceeded only on activated droplets grown on the lower Sc CCN subset. These physical (coalescence among droplets and Brownian capture of interstitial particles) and chemical (gas-to-particle conversion of sulfate or nitrate) processes then increased the soluble content of cloud droplets so that when they evaporated, as they usually do, the dry particles that emerged had even lower Sc than the CCN that had first produced the cloud droplets. These activated CCN thus increased in size (lower Sc) whereas the unactivated CCN did not change size or Sc. This resulted in a size distribution gap at the maximal Sc from which the activated CCN grew to droplets. The size at this Hoppel minimum then represented Seff of the clouds that had processed the aerosol. Since this gap generally occurred at 70-80 nm diameter and since composition was generally assumed to be ammonium sulfate this inferred Seff < 0.3% for the maritime stratus clouds under which the observations were made.

Detailed spectra from the DRI CCNs now reveal bimodality in RICO (wintertime Caribbean cumuli), MASE (polluted California stratus), PASE (central Pacific), POST (California stratus) and ICE-T (summertime Caribbean cumuli). Since CCN measurements are in terms of S, particle composition is not required to estimate Seff . In MASE and ICE-T there were also simultaneous DMA measurements to compare with CCN spectra by transposing size to Sc by using κ.  κ's that make DMA spectra agree with simultaneous CCN spectra (Fig.) thus provide CCN κ . DMA-CCN agreement was consistent for 227 MASE measurements and 50 ICE-T measurements. But for some bimodal spectra slightly different κ were indicated for the two modes. In Fig. 1a κ 0.35 works best for the higher Sc mode but κ 0.30 is best for the lower Sc cloud-processed mode. A somewhat consistent opposite pattern of κ differences between modes indicated chemical processing in MASE. Since most κ were found to be lower than ammonium sulfate (0.61) chemical processing should then make κ closer to 0.61 for the cloud-processed lower Sc mode. MASE above cloud measurements showed higher κ and less bimodality. These are consistent with the higher NCCN above and that κ is lower in pollution and less cloud interaction than below cloud. That bimodality was not universal under the ubiquitous MASE stratus suggests less than a well-mixed boundary layer. 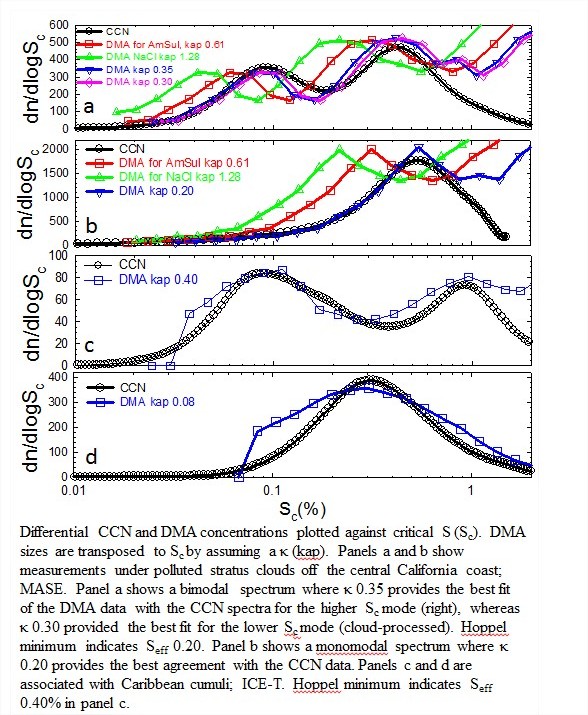