The NWP system is based upon the Weather Research and Forecast modeling system (WRF).  It is run operationally at resolutions ranging from 4km over the contiguous United States (CONUS) and Europe to 36 km nearly globally to produce forecasts out to 72 hours.  Forecasts are updated every 3 hours over CONUS and every 6 hours outside of CONUS.

GTG is calculated in all of the NWP domains for forecasts out to 36 hours.  Regions of turbulence are then derived from the GTG values within each domain, combined into a global composite, color-coded to indicate one of five turbulence intensities, then presented to forecasters.  As shown in Fig. 2, turbulence intensity is forecast in both transient regions and in pre-defined regions (as outlined in grey) downwind of mountain ranges where mountain wave induced turbulence is known to be common (typically quadrilateral polygons, shown in grey in Fig. 2). 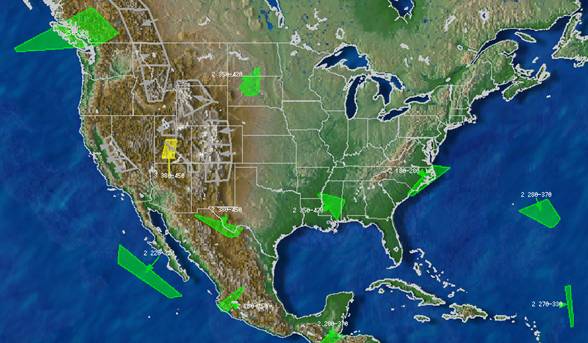 This automated method provides a basis for en-route turbulence forecasts issued by aviation forecasters at WSI Corporation.  The technique consolidates a vast amount of NWP forecast data into a more relevant presentation, but still allows for human input to improve upon known short-comings of NWP forecasts and turbulence algorithms.