214 Tropical Clouds and Their Radiative Effects: Why Does It Matter If an Anvil Is Thick or Thin?

More
Regency A/B/C (Hyatt Regency Vancouver)
Blaz Gasparini, UW Seattle, Seattle, WA; and D. Hartmann and P. J. Rasch
The tropical cloud radiative effects are largely determined by the fraction of thin anvil cirrus, which lead to positive cloud radiative effects, and thick anvil cirrus, which lead to negative cloud radiative effects (Fig. 1). The ratio of thin vs. thick anvil cirrus is controlled by a number of processes including radiative heating due to atmospheric cloud radiative effects, microphysical processes, ice crystal sedimentation, heating below cloud base, cooling at cloud top, mixing across cloud interfaces, and the large scale ascent (Fig. 1b). However, it is still not fully understood what are the main drivers of anvil cirrus cloud extent, microphysical, and radiative properties. Moreover, most current general circulation models use separate cloud and microphysical parameterization schemes for stratiform clouds, shallow, and deep convection. This leads to additional model complexity and problematic interactions between several parameterizations, resulting in inconsistent cloud type formulations (Fig. 1a)

We try to better understand which processes control the distribution and evolution of clouds residing at high altitudes in the tropics. A large effort is directed towards correctly representing convectively detrained anvil cirrus clouds, which have been found to be the radiatively dominant cloud type in this area and have not been adequately studied yet. For this purpose, the Exascale Earth System Model coupled to an innovative unified cloud scheme is used in combination with satellite data. This newly developed model is able to simulate areas with multiple cloud species in a better way compared to other climate models. We evaluate the model simulations of tropical clouds with satellite data to find the main source of the model bias.

Furthermore, we focus on the model representation of processes such turbulence, cloud radiative effects, or microphysical processes controlling the detrained ice mass and test which processes are crucial for the life cycle of tropical anvil cirrus clouds (Fig. 1b). We also explore the dependence of anvil cloud representation on vertical model resolution. 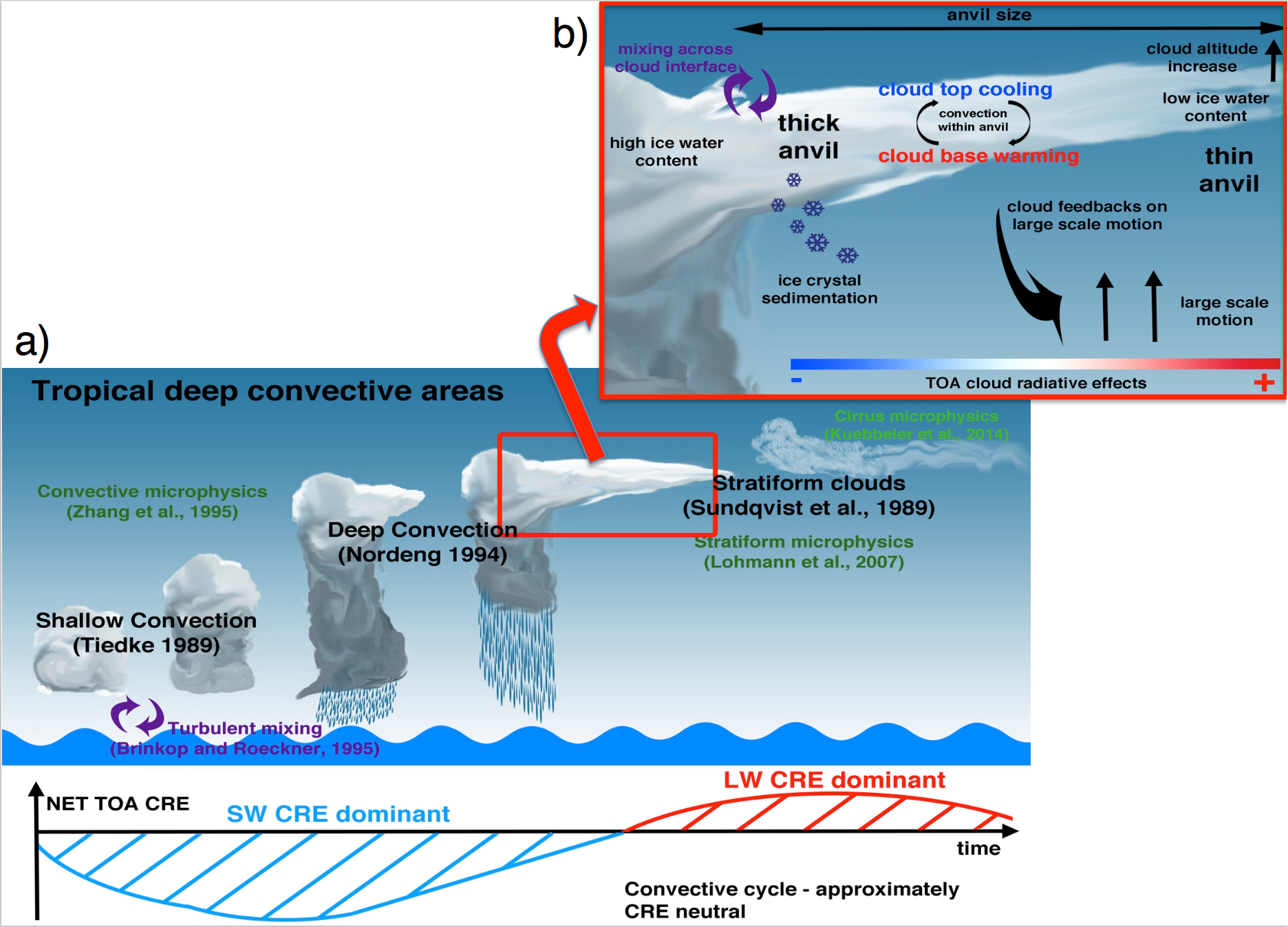