More
Regency D (Hyatt Regency Vancouver)
Bernhard Schulz, Max Planck Institute for Meteorology, Hamburg, Germany; and J. P. Mellado
Recorded Presentation
Both, droplet sedimentation and wind shear can alter the temporal evolution of the stratocumulus topped boundary layer significantly. While a sufficiently strong wind shear enhances the mean entrainment velocity, sedimentation does the opposite and reduces the mean entrainment velocity, which suggests that both processes have the potential to compensate each other. However, entrainment is known to depend crucially on meter and submeter scale mixing processes, which makes it difficult to quantify these effects. Here, this problem is addressed by employing direct numerical simulations and indeed we find that wind shear and sedimentation effects can compensate each other completely.

When we study wind shear alone, without droplet sedimentation, we observe that shear amplifies entrainment only if the cloud-top velocity jump Δu exceeds the critical shear velocity Δucrit [1]. This threshold is based on the observation that shear effects are only significant if the thickness associated with shear, hs, is comparable or thicker than the entrainment zone thickness, hEZ, which is typically a few tens of meters or less. We have provided the critical shear velocity as function of in-cloud and free tropospheric parameters and for the research flight DYCOMS-II RF01, investigated here, one finds Δucrit ≈ 2 m s-1 . We find that imposing a strong shear with Δu > Δucrit enhances the liquid water content within the entrainment zone, which in turn strengthens evaporative cooling and increases the mean entrainment velocity substantially. For the cloud-top velocity jumps investigated here we observe changes of up to 40% as shown in Fig. Nr. 1.

On the other hand, previous work has shown that droplet sedimentation alone, without cloud-top shear, can significantly reduce the entrainment of dry tropospheric air by removing liquid water from the entrainment zone—thus reducing evaporative cooling—and by promoting a positive buoyancy flux that directly opposes entrainment [2]. As shown in Fig. Nr. 1 this leads to a substantial reduction of the mean entrainment velocity, with changes of up to 40%. This reduction is significantly stronger than previously observed in coarser resolutions, where excessive mixing by turbulence models and numerical artifacts may have partially masked sedimentation effects on entrainment.

In summary, we find that wind shear and sedimentation effects can compensate each other completely due to their opposing effect on the vertical transport of water. This work also demonstrates that the mean entrainment velocity is equally sensitive towards changes in wind shear and towards changes in the sedimentation strength, which suggests that the droplet-size distribution (DSD) is much more important in determining cloud-top entrainment than previously anticipated. This emphasizes the need for accurate measurements of the DSD. Moreover, it clearly shows that entrainment velocity parametrizations should pay equal attention to wind shear and sedimentation effects. 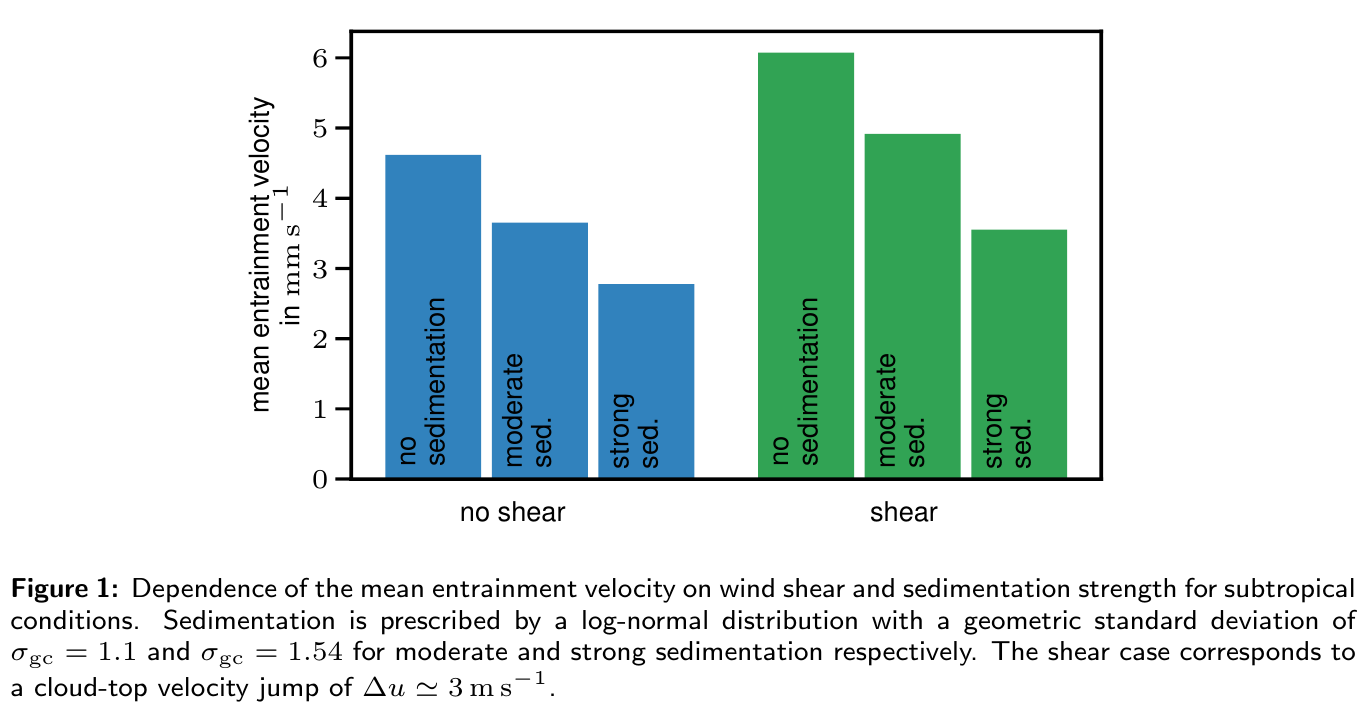