More
Regency D (Hyatt Regency Vancouver)
Brian D. Swanson, Univ. of Washington, Seattle, WA; and J. Nelson
Recorded Presentation
Both cold cloud models and climate models remain uncertain due to our lack of knowledge of the fundamental microphysics of ice crystal growth and sublimation. Previous crystal habit observations and laboratory measurements of ice crystal growth rates have produced widely varying results. Although the vast majority of ice crystals in the upper-troposphere are polycrystalline in shape, both prismatic plates and columns are sometimes found in large numbers. We report here our first results from a series of experiments observing the formation and growth mechanisms of both Snomax nucleated and “homogeneously” nucleated ice crystals growing and sublimating at -30C. For these experiments we have developed a triple-capillary cryostat (TCC) specifically to address the non-reproducibility of previous results. The new chamber design contains 3 capillaries inside a central growth chamber, minimizes crystal-crystal and crystal-substrate interactions, and provides for precise control of thermodynamic conditions for growth or sublimation. Ice crystals nucleate at the capillary tips and the capillaries can be translated (thereby adjusting the crystal-crystal separation distance to look for proximity effects) or rotated (for observing each crystal at any angle). Reproducibility testing is provided for with the ability to observe and tele-microscopically image up to 3 or more different crystals growing or sublimating at the same time under identical thermodynamic conditions. With the results reported here we demonstrate the TCC provides a well-controlled temperature and saturation environment for growth and sublimation rate measurements at temperatures down to -60C. The TCC was also designed to observe growth and sublimation for a wide-range of air pressures and trace gas concentrations. We find the TCC instrument produces results complementary to EDB, diffusion chamber and cloud chamber experiments. Particularly useful in the TCC is the ability to follow the evolution of multiple crystals and to rotate these crystals repeatedly for high-resolution imaging at precisely defined crystal orientations. We will describe the features of the new instrument and report results looking at the variability of crystal shape and growth rate for crystals held in the TCC under identical temperature and super-saturation conditions.

We began these experiments with two questions: To what extent is there a reliable crystal “habit” and unique crystal growth or sublimation rate at -30C? Do ice crystals forming and growing at -30C that were initiated with the same nucleation mode and grow with the same saturation conditions all have a similar shape and growth rate or sublimation rate? As we will see, the answer is that shape and growth rate is surprisingly variable in the well-controlled laboratory environment (and likely much more variable in the more complex cirrus cloud environment) compared to water droplet evaporation rates which appear very much the same. In our experiments we observe the evolution of crystals with both simple hexagonal prism-like and complex poly-crystalline shapes and we report measurements of the growth and sublimation rates along the two principle axis of these crystals.

In a second set of experiments we study the hollow and pocket formation process. The presence of hollows and pockets in ice crystals can have a significant influence on the single-scattering properties of the particles. In these experiments we grew 9 crystals under identical nucleation mode, temperature and growth rate conditions and observe the similarity in basal facet center hollows and pockets that formed. The focus of these experiments are to document hollow formation and the hollow shape evolution process. Our data set was taken at -30C and we find two general classes of hollows forming - 5 of the 9 crystals grew with remarkably similar basal facet center hollows which remained open hollows while 4 of the crystals grew with several types of closed pockets that were considerably smaller than the open hollows. 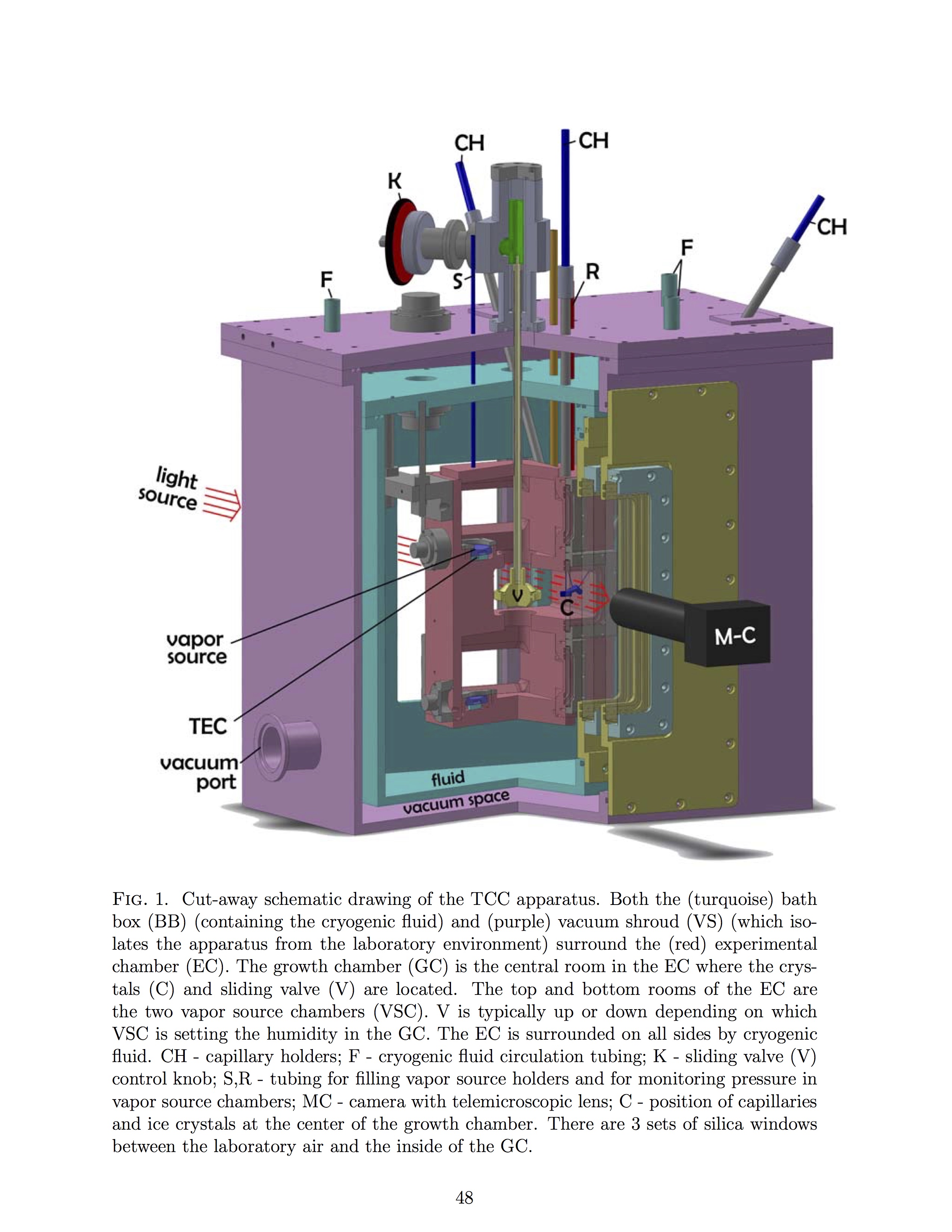