More
Regency E/F (Hyatt Regency Vancouver)
Xianglei Huang, Univ. of Michigan, Ann Arbor, MI; and X. Chen, Y. H. Chen, C. P. Kuo, P. Yang, M. G. Flanner, D. Feldman, and C. Kuo
Recorded Presentation
Surface longwave emissivity can be less than unity and vary significantly with frequency. However, most climate models still assume a blackbody surface in the longwave (LW) radiation scheme of their atmosphere models. This study incorporates realistic surface spectral emissivity into the atmospheric component of the Community Earth System Model (CESM) version 1.1.1 and evaluates its impact on simulated climate. By ensuring consistency of the broadband surface longwave flux across different components of the CESM, the top of atmosphere (TOA) energy balance in the modified model can be attained without retuning the model. Inclusion of surface spectral emissivity, however, leads to a decrease of net upward longwave flux at the surface and a comparable increase of latent heat flux. Global-mean surface temperature difference between the modified and standard CESM simulation is 0.20 K for the fully coupled run and 0.45 K for the slab-ocean run. Noticeable surface temperature differences between the modified and standard CESM simulations are seen over the Sahara desert and polar regions. Accordingly, the climatological mean sea ice fraction in the modified CESM simulation can be less than that in the standard CESM simulation by as much as 0.1 in some regions. When spectral emissivities of sea ice and open ocean surfaces are considered, the broadband LW sea-ice emissivity feedback is estimated to be -0.003 Wm-2 per K (assuming flat ice emissivity as sea ice emissivity) and 0.002 Wm-2 per K (assuming coarse snow emissivity as sea ice emissivity), two orders of magnitude smaller than the surface albedo feedback.

Next, we assess the impact of longwave scattering in conjunction with surface spectral emissivity. To do so, we modified RRTMG_LW in the CESM to allow the longwave scattering of cloud and updated the ice cloud optics based on the ice microphysics model used in MODIS collection 6 and updates ice crystal scattering database. It turns out that, with both LW cloud scattering and surface spectral emissivity included, the global-mean net upward longwave flux at surface is reduced by 1.6 wm-2 and, as a compensation, the latent heat flux is increased by 2.5 Wm-2, leading to a surface imbalance of 0.9 Wm-2. Though the impacts on global-mean LW cloud radiative effect, cloud fraction and liquid water path are negligible, the impact on cloud fields over entire Southern Oceans and certain parts of North Atlantic and North Pacific is obviously large. Comparing to the standard CESM, the LW cloud radiative effects over aforementioned regions increase by as much as 5 Wm-2 and the cloud liquid water by as much as 7 g m-2. Accordingly, the downward LW flux at surface increases by as much as 27 W m-2. 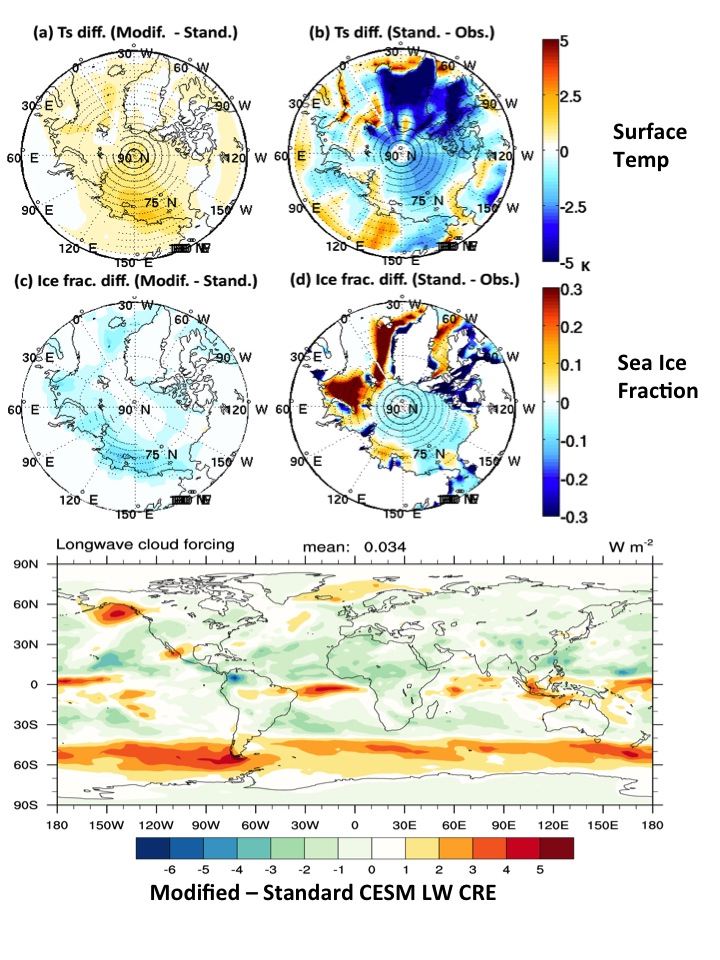