More
Regency D (Hyatt Regency Vancouver)
Yign Noh, Yonsei University, Seoul, Korea, Republic of (South); and D. G. Oh, F. Hoffmann, and S. Raasch
Recorded Presentation
Lagrangian cloud model (LCM) is a fundamentally new approach of cloud simulation, in which the flow field is simulated by LES and droplets are treated as Lagrangian particles undergoing cloud microphysics (Riechelmann et al. 2012; Hoffmann et al. 2017). LCM enables us to investigate raindrop formation and examine the parameterization of cloud microphysics directly by tracking the history of individual Lagrangian droplets simulated by LCM. In the present work the autoconversion and accretion rates are calculated directly by capturing the moment of the conversion of individual Lagrangian droplets from cloud droplets to raindrops. Analysis reproduces the formulae for autoconversion and accretion for the first time. The comparison of the autoconversion rate A and the accretion rate C with various parameterizations shows the closest agreement with Tripoli and Cotton (1980); that is, A = a qc7/3 Nc-1/3 H(R - RT) and C = βqcqr. where qc and qr are the mixing ratio of cloud droplets and raindrops, Nc is the number concentration of cloud droplets, α and β are the proportional constant, and RT is the threshold radius (Fig. 1). Furthermore, the effects of turbulence (ε) through collision enhancement and the dispersion of drop size distribution (σ) on autoconversion are clarified. a increases linearly with ε and σ, but RT decreases rapidly with σ, while disappearing at σ > 3.5 μm. The LCM also shows that ε and σ increase with time in shallow cumulus clouds, and it helps resolve the problem associated with the too early production of rain water too low in the cloud, which is common in many parameterizations. Finally, accretion is found to depend mainly on the raindrop size distribution, which results from the accumulated collisional growth. 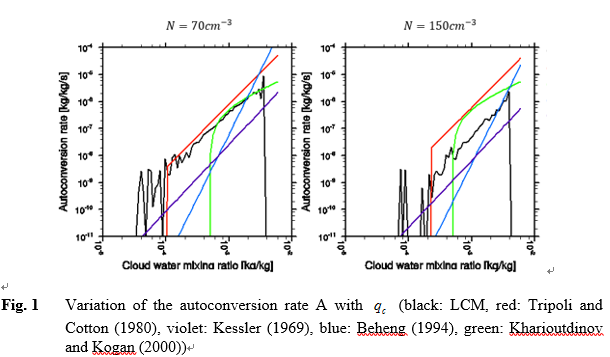