5.6 Why Do Warm Clouds Rain: A Comparison of Southern Ocean and South-East Pacific Marine Stratocumulus Clouds

More
Regency D (Hyatt Regency Vancouver)
Jørgen B. Jensen, NCAR, Broomfield, CO; and M. K. Witte
Aircraft observations from three NSF/NCAR deployments are used to determine the primary causes of warm rain from marine stratocumulus decks. The three data sets are from the 2008 VOCALS deployment in the southeast Pacific off the coast of northern Chile, the 2016 ORCAS deployment over the Southern Ocean off the southern tip of Chile, and the 2018 SOCRATES deployment over the Southern Ocean south of Tasmania, Australia. For each of these deployments, about 60 slant aircraft profiles (“vertical soundings”) are used to characterize the cloud microphysics.

Given the recent completion of SOCRATES, analysis of the levels of giant sea-salt cloud condensation nuclei (GCCN), turbulence levels, and the degree of decoupling has only just started, but each of these may have considerable impact on the respective strengths of the warm rain processes. Currently a thorough classification of the different marine cloud types is underway; this is done to select only profiles with stratocumulus decks, with mixed cumulus and stratocumulus, and with only cumulus in order to select appropriate vertical profiles from the three regions for further analysis. 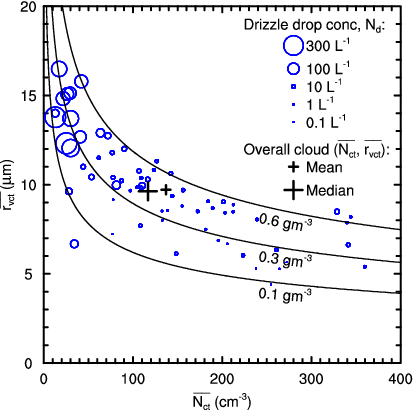