More
Regency A/B/C (Hyatt Regency Vancouver)
Robin J. Hogan, ECMWF, Reading, United Kingdom; and T. L. Quaife
The interaction of atmospheric radiation with complex 3D surfaces such as urban areas and forests is important for many reasons. The amount of sunlight absorbed by vegetation determines their rates of transpiration and photosynthesis, relevant for both near-surface temperature prediction in weather models and the evolution of dynamic vegetation in climate models. Likewise, shortwave and longwave radiation exchange in street canopies is crucial for forecasting the magnitude of the urban heat island effect, and its impact on downstream weather. In this presentation we will demonstrate the application of the "SPARTACUS" methodology, originally developed for 3D cloud radiative effects in GCMs, to urban areas and forests. The surface canopy is divided in the horizontal plane into several "regions": a clear-sky region, up to two vegetated regions of different leaf density, and optionally an impermeable region representing buildings. The two-stream equations are used in each permeable region but with additional terms representing the lateral exchange of radiation between regions. The new terms can be parameterized simply in terms of an effective tree size and an effective building size. The equations are solved exactly using the matrix-exponential method, or the faster Meador-Weaver equations for urban areas with no trees. In the case of forests, we demonstrate excellent agreement between SPARTACUS and Monte Carlo calculations from the RAMI4PILPS intercomparison exercise. This is even when there is snow on the ground, a very common scenario but one that is treated poorly in most state-of-the-art schemes in climate models. In the case of urban areas we analyse the building layouts of real cities to demonstrate that SPARTACUS's assumption that buildings are randomly distributed is more realistic, and simpler to treat mathematically, than the single infinitely-long street assumption in most other urban radiation models. The implementation of this new approach in the new ECMWF radiation scheme "ecRad" allows radiative interactions at the canopy level to use a consistent spectral discretization to the atmospheric radiation calculations. The figure shows (a) building geometries and heights for central London, and (b) the corresponding SPARTACUS calculation of mean broadband shortwave fluxes into the roofs, ground and walls, where the numbers in brackets in the legend indicate the area of each of these surfaces divided by the horizontal area of the domain. 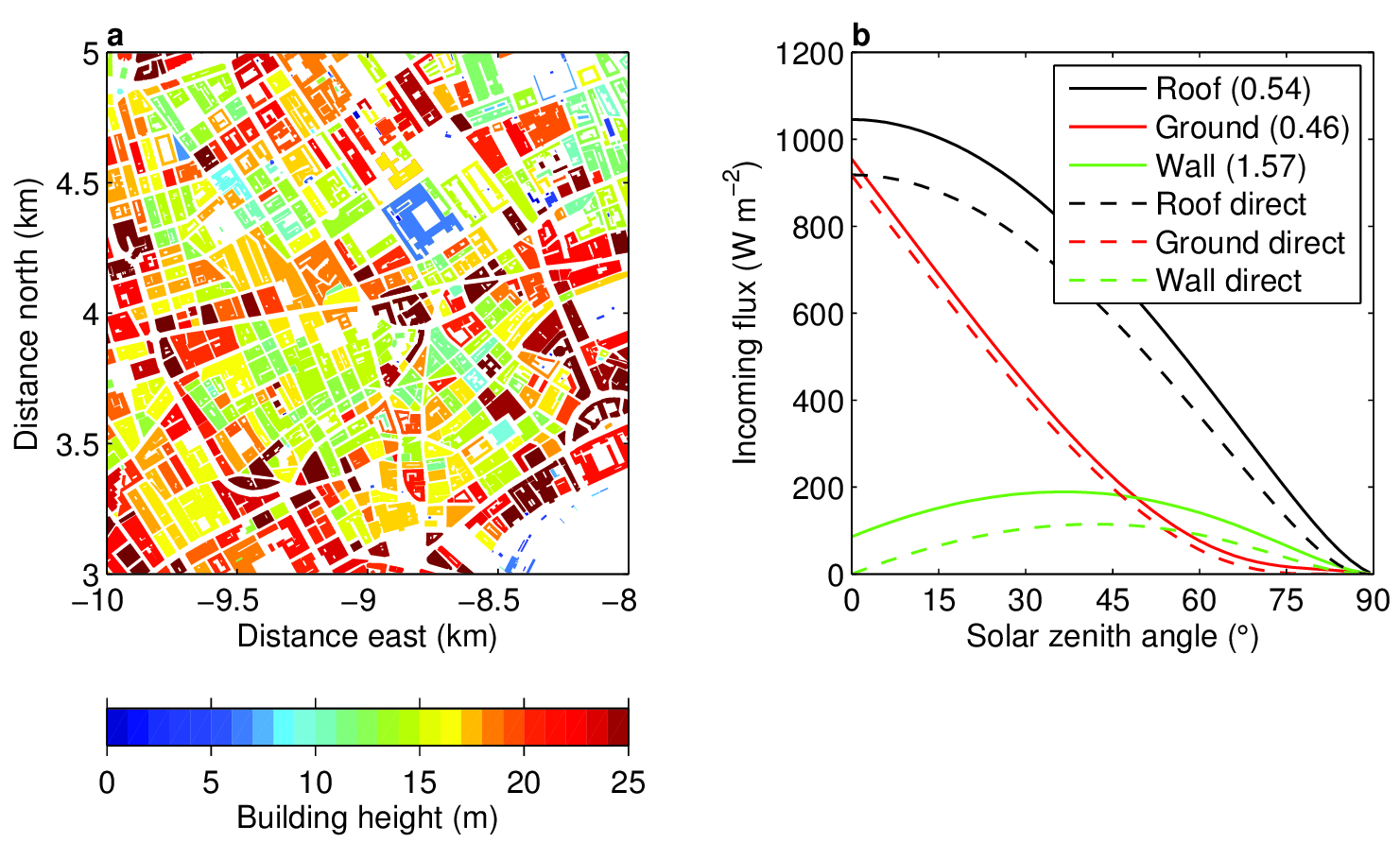