Air entrained into cumulus clouds (Cu) results in homogeneous mixing or inhomogeneous mixing according to Baker et al. (1980) depending on the time scales associated with turbulence and droplet evaporation. Much has been published on this mixing topic since that landmark paper, but still no consensus exists as to which mixing type dominates. Modeling efforts dealing with this topic have a variety of results. LES use grid spacing that is too large to deal adequately with the full range of entrainment scales. Recently progress has been made using enhanced DNS and 1-D EMPM models to reach smaller scales. However, limitations exist because of the needed large amount of computer time. Observational approaches also have limitations, primarily because droplet sizes in the Cu are measured with insufficiently fine resolution by droplet spectrometers given the known size range of entrained parcels. This is especially true for Cu with low droplet concentration, such as trade-wind Cu, for which droplet spectra measured from aircraft even over 100 m in-cloud still show noisy data. A popular observational approach for identifying the mixing type using spectrometer size data is “mixing diagrams” which include large uncertainties.

The present effort looks at high-resolution data from lightly-precipitating trade-wind Cu from the RICO field study. The PVM-100A aircraft probe is used to measure integrated values of liquid water content (LWC) and effective radius (Re) with an in-cloud resolution of 20 cm; see the attached Fig. for an example. This fine resolution circumvents the spectrometer sizing limitation and makes it possible to identify cloud parcels with reduced values of Re suggesting the presence of droplet evaporation. The entrained ambient RH causing the amount of Re reduction in each data point is roughly estimated by calculating the sensitivity of Re of the measured droplet spectrum in the Cu for a range of hypothetical ambient RH values. A match of the measured Re reduction with the calculated Re reduction gives the desired ambient RH value for which a pdf for the Cu is generated. This makes it possible to estimate the “reaction time scale” associated with droplet evaporation. Another result is the “transition length scale.”

This presentation will provide evidence including for the following results: The microphysical structure of the trade-wind Cu is dominated by homogenous mixing, including the behavior of weak variability in Re and Rv (mean volume radius) and the strong variability in LWC and N (droplet concentration). The exceptions are Cu that are dissipating. The homogenous mixing conclusion is supported by the high-rate LWC measurements in-cloud, and also by a Damkoehler number < 1.0 that depends in part on the high value of the ambient entrained RH. The "transition length scale" that separates homogeneous and inhomogeneous mixing is determined. The present high-rate LWC and Re measurements also permit construction of “mixing diagrams” which help understand the previous work with such diagrams. 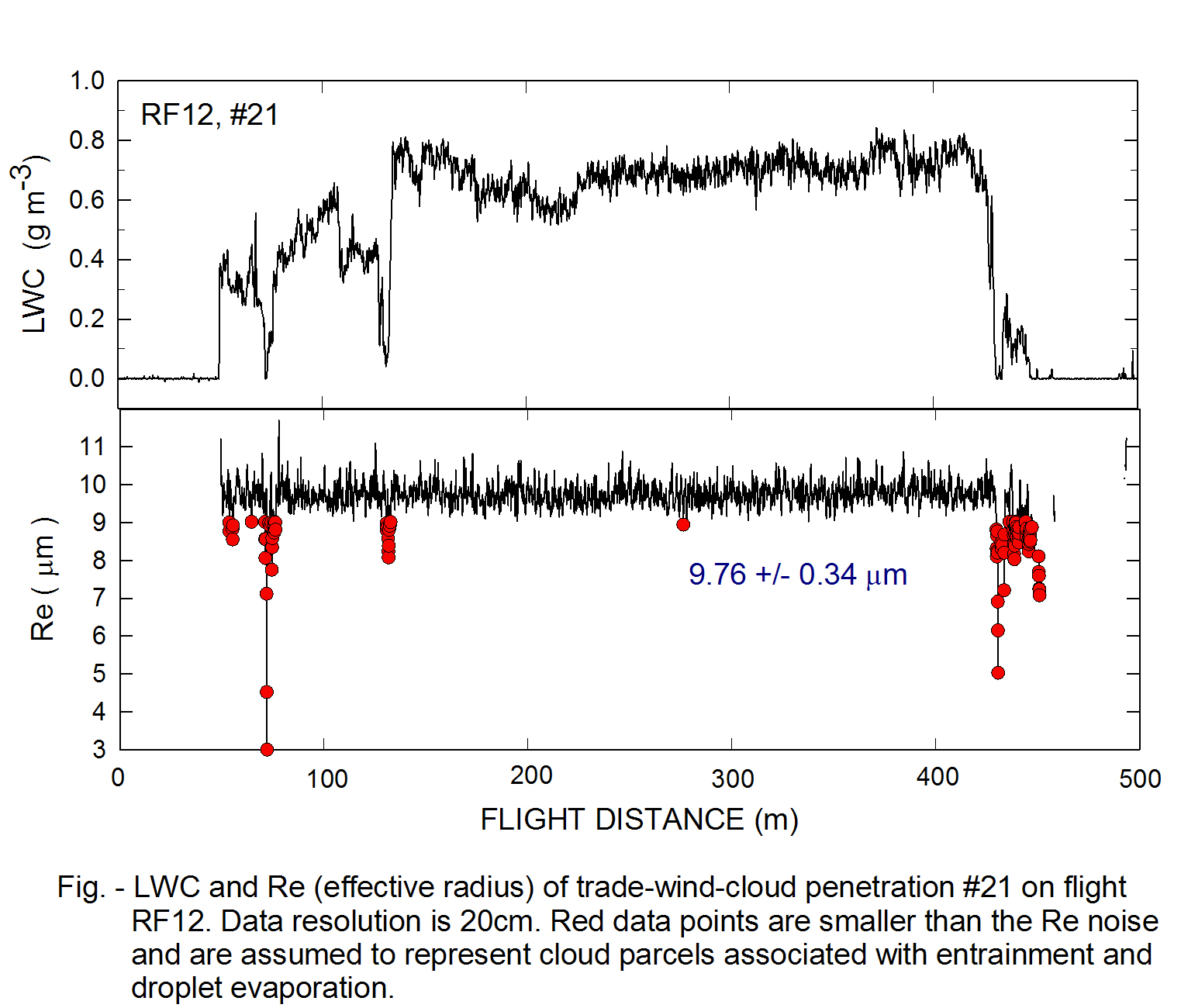