More
Regency A/B/C (Hyatt Regency Vancouver)
Miho Sekiguchi, Tokyo University of Marine Science and Technology, Tokyo, Japan
The aerosol indirect effect is important for an estimation of climate change, but it has a large uncertainty. Many previous studies investigated the correlations between aerosol and cloud parameters derived from satellite remote sensing, which are pointed out two disadvantages. One is the observation for aerosols and cloud parameters are not coincident with passive remote sensing, the other is retrieval aerosol data is observed at a clear condition, not in a cloudy field. To overcome these disadvantages and achieve better evaluations, we developed a statistical method that spatial and temporal range of data was regarded as a characteristic of that period and area and we used to take correlations using those spatial and temporal statistically significant data.

In this study, we adopted Advanced Himawari Imager satellite data to the statistical method. The Advanced Himawari Imager (AHI) has been carried by the Himawari-8/9 satellite, which is a new generation of Japanese geostationary meteorological satellites. The AHI was greatly improved spectral, spatial and temporal resolution compared to previous meteorological satellites of Japan. They have 16 observation bands, and their spatial resolution is 0.5 or 1 km for visible and near-infrared bands and 2 km for infrared bands. They have also shortened revisit times, around 10 min for Full Disk and 2.5 min for target areas, which provide new levels of understanding of atmospheric phenomena. We used research products of aerosol and cloud properties provided by the P-Tree System, Japan Aerospace Exploration Agency (JAXA). We derived aerosol column number concentrations (Na) by the aerosol products and averaged from 9 to 15 o'clock in local time to prevent data of large solar zenith angles. We also calculated day-time averaged data for effective radius(re) and optical thickness(τc) of low clouds. We gathered the day-time averaged cloud data at a northern subtropical region in January 2017, the region was determined 100 – 180 °E and 15 – 25 °N in this study. We divided into bins of log10Na, whose width is set as 0.02. We averaged cloud parameters in each bin and took correlations log10Na with log10re and log10τc. The tendency of correlation between log10Na and log10re was negative and that between log10Na and log10τc was positive in small – moderate amount of atmospheric aerosol loading (about Na < 109 [particles/cm2]), which was consistent with an aerosol indirect effect. The regression slopes were almost same in the previous study, which was used MODIS products in the northern subtropical region. We found different trends depending on liquid optical path. We will also show correlations at other regions and compare in the previous study. 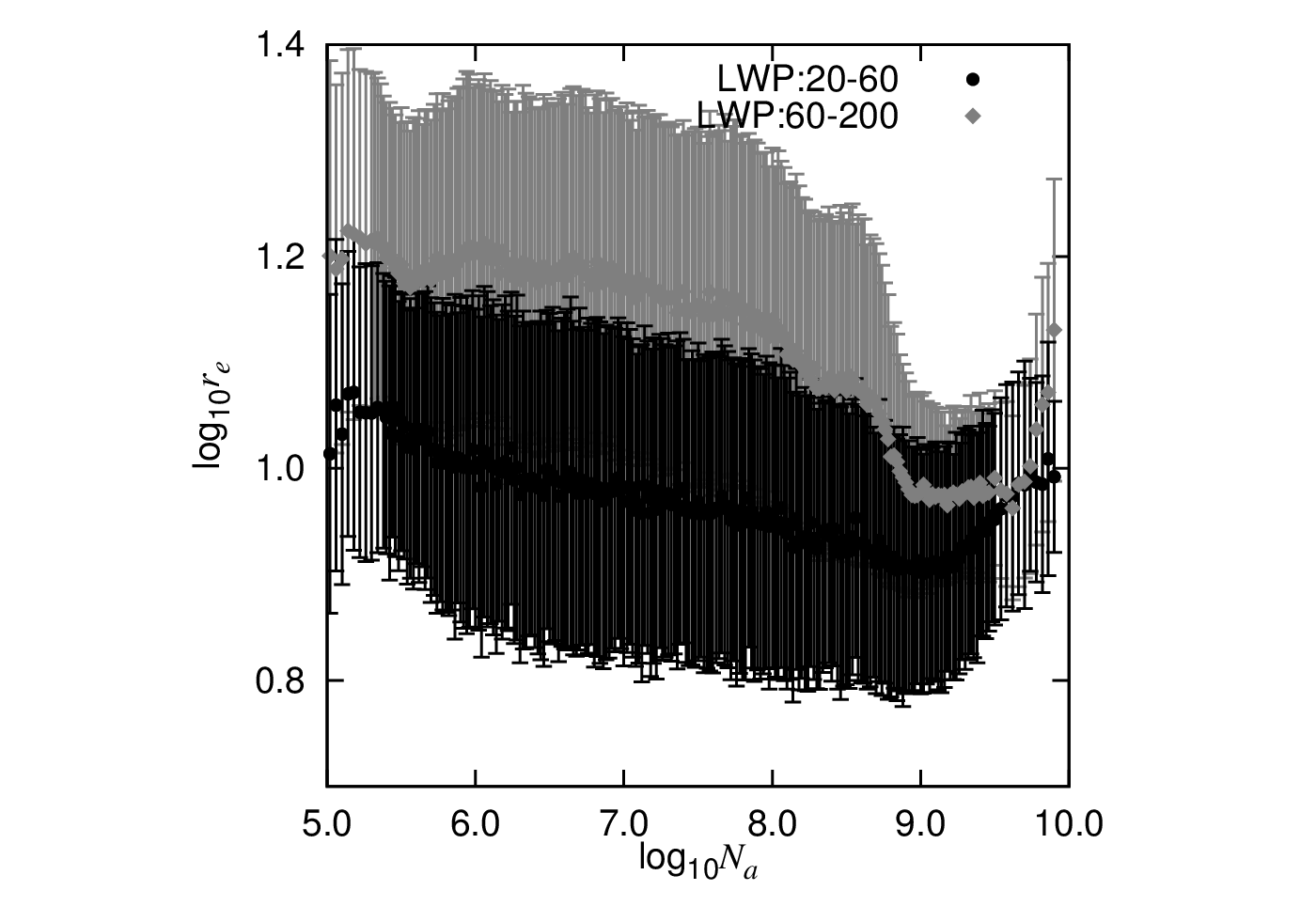