Fog is a high-impact phenomenon affecting human activity, including aviation, transport and health. Its forecast depends on complex interactions among various local parameters (such as the radiative cooling, local turbulence, small scale circulations or vegetation) and small changes in some of these can determine the difference between good visibility or persistent fog. Because of the complex processes and retroactions involved, fog simulation remains a challenge even when the thermodynamical conditions are correctly reproduced. One common bias of numerical weather prediction (NWP) models is to produce excessive cloud water contents in fog, which has an impact on the fog radiative cooling/heating, and its lifetime. This hints that some processes might be missing or could be improved in cloud microphysical schemes.

Another aspect of interest is the impact of the aerosol population on fog formation, characteristics and dissipation. Aerosol particles affect the cloud microstructure through their ability to nucleate droplets, and therefore largely influence the cloud droplet number concentration and size. Their effect on fog, where supersaturation is generally very low, has not been thoroughly studied yet.

The LIMA (Liquid Ice Multiple Aerosols, Vié et al. 2016) scheme aims at representing at best the diversity of aerosol particles and their different properties regarding the nucleation and cloud system interactions at convective scale. LIMA was developed in the MESO-NH (Lafore et al. 1998, http://mesonh.aero.obs-mip.fr/) non-hydrostatic mesoscale research model. Aerosols are represented by 3D, prognostic number concentrations for as many modes as deemed necessary, each mode being defined by a chemical composition, a log-normal size distribution, and the property to nucleate cloud droplets or/and ice crystals. CCN activation (after Cohard et al. 1998) and IFN nucleation (following Phillips et al. 2008,2013) explicitly depend on available aerosols properties and concentrations.

High resolution simulations of fog are performed with both LIMA and the 1-moment scheme ICE3 (used daily in the french operational mesoscale NWP system AROME) for different cases to study the impact of small-scale features and circulations, to assess the benefits of a 2-moment scheme, and to evaluate the sensitivity of fog to the aerosol population.

Simulations were first performed at SIRTA (near Paris) with a horizontal resolution of 4m. Results from these simulations showed that it is crucial to account for the cloud droplet deposition on vegetation surfaces at the lowest level, as it is an important sink for cloud water, on top of cloud droplets sedimentation. Another essential point is to represent the drag effect of trees in the vicinity of the fog formation area. For this case, it was found that the 2-moment scheme LIMA performs best, with less overestimated cloud mixing ratios and a realistic vertical structure, but overestimates the number of cloud droplets despite an accurate CCN population.

The LANFEX campaign (Local And Non-local Fog Experiment) was driven by the Met Office to address some questions relating to the impact of complex terrains on the life cycle of fog. A large range of instrumentation was deployed in the UK for 18 months, over a region of small hills with complex valleys. During stable boundary layer conditions, valleys were expected to modify local circulations with drainage flows which could induce formation of fog at certain location but not others.

A collaborative work is currently performed between CNRM and Met Office for modeling fog at fine scale using LANFEX cases, starting with the LANFEX IOP 12 case (1st-2nd October 2015). A particularity of this case is that stratocumulus led to the dissipation of the fog around midnight because of the increase of the downward long wave radiation at the surface. Hectometric simulations of this case were performed with both ICE3 and LIMA. Despite a few discrepancies, the fog formation is quite correctly reproduced, and shown in the attached figure at 00UTC on 2015/10/02. The model is able to correctly reproduce the local circulation in different small valleys leading to varying fog characteristics at different sites. The sensitivity of the simulated fog to the microphysical scheme and aerosol population is explored in comparison to available observations. 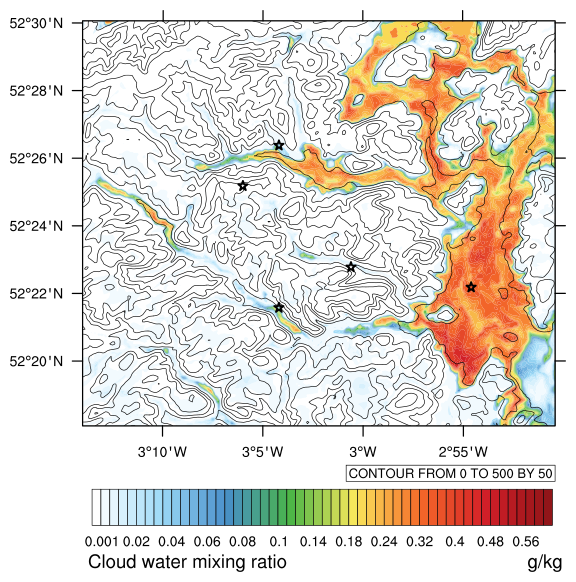