More
Regency E/F (Hyatt Regency Vancouver)
David L. Mitchell, DRI, Reno, NV; and J. Mejia, A. Garnier, and F. Hosseinpour
Recorded Presentation
Cirrus clouds have a net warming effect on climate, and at high latitudes this warming effect is enhanced due to the higher noon-time solar zenith angles, with the longwave cloud radiative effect (CRE) being much stronger than the shortwave effect. Thus the cirrus cloud net CRE at high latitudes, especially during non-summer months, exhibits a relatively strong net warming. Since the polar jet stream is affected by the temperature gradient between the mid- and high latitudes, changes in Arctic cirrus cloud coverage could affect this temperature gradient and thus the jet stream and possibly the storm track. Similarly, processes that alter the radiative properties of these cirrus clouds could have a similar effect, such as a change from homo- to heterogeneous ice nucleation (henceforth hom and het).

To determine whether cirrus clouds formed via hom (i.e. hom cirrus) are abundant at high latitudes, a satellite remote sensing method was developed that is based on wave resonance absorption, which is sensitive to small ice crystals. The retrieval utilizes radiances from the infrared imaging radiometer and backscatter from the CALIPSO lidar. Retrieved single-layer cirrus cloud (T < 235 K) properties include the mid-cloud temperature T, ice particle number concentration Ni, effective diameter De, ice water content (IWC) and visible optical depth (OD), where cirrus cloud OD ranges from about 0.3 to 3.0. Based on the Ni retrievals, it appears that hom cirrus are prevalent at high latitudes. This is because only hom can account for Ni exceeding ~ 250 liter-1 in regions typically having relatively low concentrations of ice nuclei.

Global retrievals of cirrus cloud De and T were used to make the cirrus clouds simulated in CAM5 conform with the retrieved De, with the number- and mass-weighted ice fall speeds in CAM5 calculated from the retrieved De. This was done by developing De-T relationships for six latitude zones (0-30, 30-60 and 60-90 for both hemispheres). Within each latitude zone, seasonal De-T relationships were developed for cirrus over land and for cirrus over ocean (making 48 De-T relationships in total). Retrieved De (N) is largest (lowest) between 30S and 30N latitude; a region dominated by anvil cirrus (a type of “liquid origin cirrus” where any new ice nucleation within cirrus anvils should be dominated by het due to pre-existing ice). Due to Ni being lowest between 30S and 30N latitude, the De-T relations for this region are considered representative for cirrus formed via het. Outside this region, retrieved De (N) tended to be considerably smaller (higher), presumably due to a combination of hom and het.

Two 10-year CAM5 simulations were performed; one where cirrus cloud De is based on the CALIPSO retrievals (henceforth CALIPSO), and one where the De-T relationship for het cirrus is applied globally (henceforth Het). Differences in net CRE between simulations are believed due to differences in cirrus formation mechanism (hom and het). Excluding summer months, zonal mean differences outside the ± 30 °latitude zone are typically ~ 1.3 W m-2 (~ 1.5 W m-2) in the mid-to-high latitudes in the Northern (Southern) Hemisphere; see figure shown below.

Relative to Het (and excluding summer months), the CALIPSO simulation in the N. Hemisphere warmed the atmospheric column at 300 hPa and below by typically 0.5 K or more, mostly poleward of 30°N. latitude, depending on the distribution of cirrus clouds. Mean zonal winds (u-component) decreased or increased, depending on the location of the region of mean warming in accord with the thermal wind balance. At 200 hPa, these changes could be as much as 7 m s-1. Mean meridional winds (v-component) were enhanced, amplifying planetary wave patterns and resulting in enhanced ridging along the Pacific coast of North America. This anomalous ridging interfered with the storm track downstream of the jet stream core, reducing precipitation by ~ 0.7 mm/day on average along the North American coast (N. California through British Columbia). Over Mexico and China, precipitation was often enhanced by 0.4 to 0.6 mm/day on average.

Based on two years of our CALIPSO retrievals, the frequency of occurrence of Arctic cirrus was a factor of two larger during the winter season relative to any other season. The inferred increase in Arctic cirrus cloud coverage during winter should also weaken the meridional temperature gradient and produce similar distortions in the jet stream and storm track. For this reason, Arctic cirrus cloud coverage should be closely monitored by satellites to detect potential changes due to a warming climate.

To summarize, to accurately predict planetary waves, cirrus cloud nucleation mechanisms (hom and het) may need to be realistically represented in GCMs. Moreover, these results imply that seasonal changes in cirrus cloud coverage at high latitudes can affect planetary wave and hydroclimate behavior. Some evidence suggests cirrus cloud coverage may be increasing in the Arctic, which may affect meridional temperature gradients, the jet stream and the storm tracks. 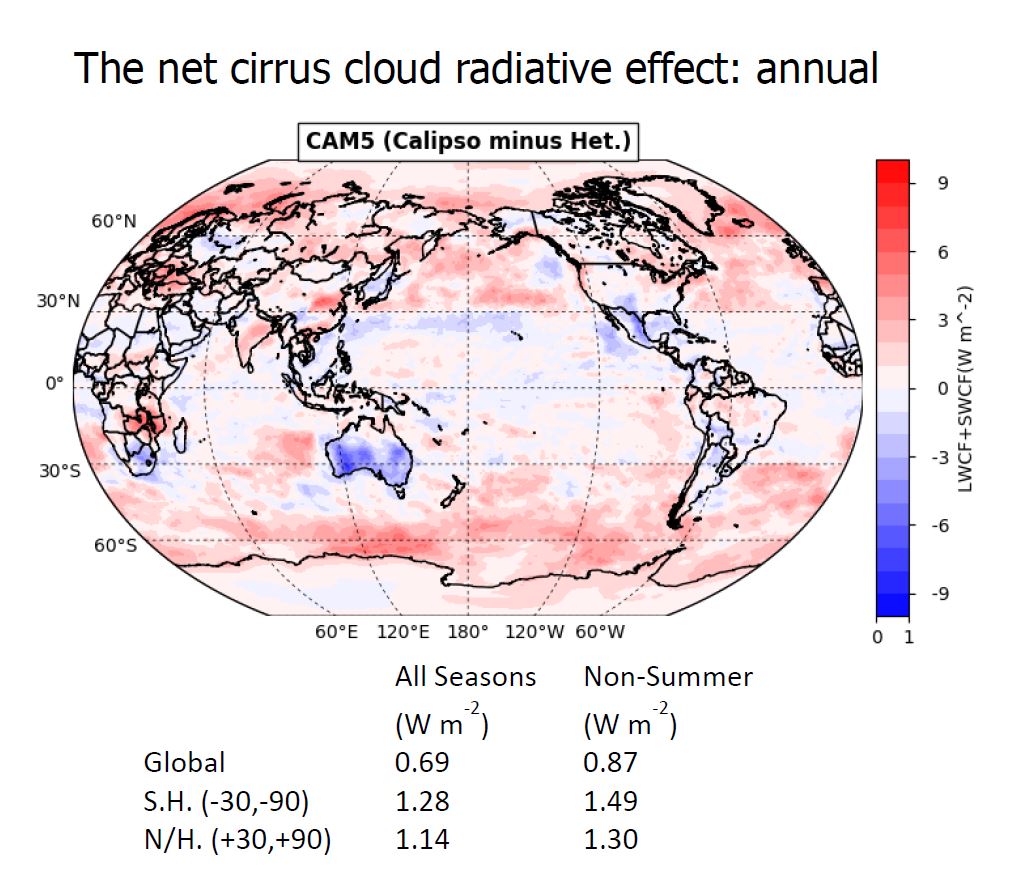