10.2 Bridging the Gap Between Molecular and Mesoscopic Scales of Ice Microphysics

More
Regency D (Hyatt Regency Vancouver)
Steven P. Neshyba, University of Puget Sound, Tacoma, WA; and J. Adams, K. M. Reed, P. M. Rowe, and I. Gladich
Recorded Presentation
We present a model for ice surface dynamics that seeks to bridge the gap between the molecular scale and a mesoscopic scale spanning 10-1000 micrometers. At the molecular scale, the model consists of molecular dynamics simulations of an ice-vapor interface, in which the dynamics of a few thousand ice molecules are determined by classical equations of motion. Statistical properties of these simulations relevant to ice growth are then expressed as functions of continuous variables, e.g., the diffusivity of quasi-liquid components of the ice-vapor interface. At the mesoscopic scale, a second model consists of partial differential equations that govern the evolution of the thickness of the quasi-liquid and crystalline components of the ice-vapor interface. This “continuum” model (CM) is parameterized by the functionalized statistical properties of the interface determined from molecular dynamics simulations. Consequently, CM is capable of simulating mesoscopic-scale ice-vapor interfaces as they evolve over a span of seconds, while still remaining faithful to selected molecular-level properties.

Time-dependent solutions of the continuum model are found to duplicate key known features of ice growth, such as homogeneous layer nucleation, catalytic nucleation of lattice defects, and the horizontal propagation of terraces and steps over time. We find that while dendritic growth occurs under some conditions, uniform (faceted) ice growth occurs under others. In the latter case, we also find that uniform faceted growth is made possible by a contraction in terrace width, an emergent process having a mathematical structure analogous to a stable limit cycle. 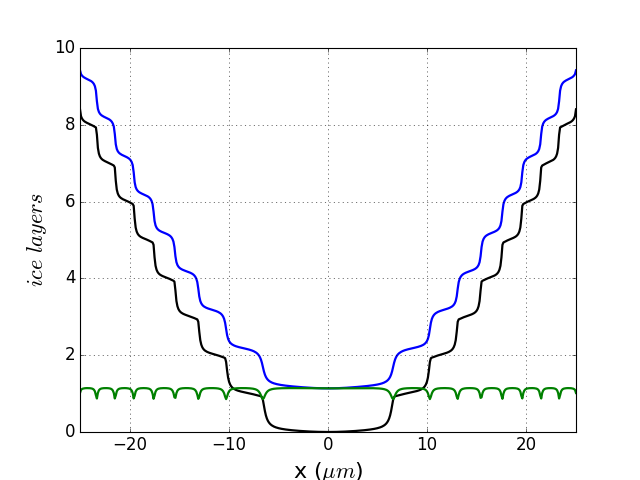