3.6 Impact of a swell-dependent roughness parameter in a regional climate model

Normally one can assume the classic Monin-Obukhov theory (MOST) in the atmospheric surface layer. At sea MOST is valid as long we have wind driven waves, i.e. growing sea. However, it has been shown when swell is present, i.e. when sea waves travel faster than the wind, this is not the case when the atmospheric stratification is unstable, e.g. in Smedman et al. (1999). The turbulence structure in the whole boundary layer is changed and the wind can even be driven by the waves when swell has the same direction as the wind. These findings have also been supported by large-eddy simulations by Sullivan et al. (2004). The wind stress has also been found to decrease when the swell and wind have the same direction.

Wind stress in climate models can be described by the roughness parameter, z0, which is calculated according to the Charnock relation z0 = αu*2/g. The Charnock parameter α is either set constant or as a function of wave age cp/u*, where cp is the phase velocity of the dominant waves and u* is the friction velocity. Expressions for α have been investigated for growing sea but not to any extent for swell.

New parameterisations of α, taking the effect of swell into account, are thus developed and tested in a regional climate model to investigate the importance of including swell effects from a changed roughness parameter in such a model.

The atmosphere model RCA3 (Rossby Centre atmospheric regional climate model) is developed at SMHI (Swedish Meteorological and Hydrological institute) and its domain covers Europe. It is a hydrostatic model, with terrain-following coordinates and the calculations are semi-Lagrangian, semi-implicit and with 30-min time step. The horizontal resolution is c. 44 km and resolved in the vertical by 24 levels between 90 m above the surface and 10 hPa. The model is forced at the lateral boundaries by ERA40 data and from below by sea surface temperature from the same data set. For more details, see e.g. Jones et al. (2004). The model has been seen to overestimate α for low wind speeds and high wave ages (Ohlsson 2006).

Measurement data were taken from the small island Östergarnsholm east of Gotland in the Baltic Sea. Marine conditions are present when the wind comes from the sector 80-220°. For more details about this site and the instrumentation, see e.g. Smedman et al. (1999). We use different parameterisations of α for wind following swell and for growing sea. Fig. 1 shows that the expression for growing sea developed from our data is in relatively close agreement with the COARE 3.0 algorithm (Fairall et al. 2003) and the expression from Large & Pond (1981). The expression for swell is significantly lower.

The new expressions of α is implemented in the Baltic Sea region. Yet, the whole model domain is influenced by the changed conditions already after a couple of days. Swell has impact on for instance the temperature and wind but also on cloud pattern and turbulent heat fluxes. Results will be shown for a case study as well as for a yearly cycle.

Fig. 1. The neutral drag coefficient, calculated from the parameterised α in comparison to earlier studies. 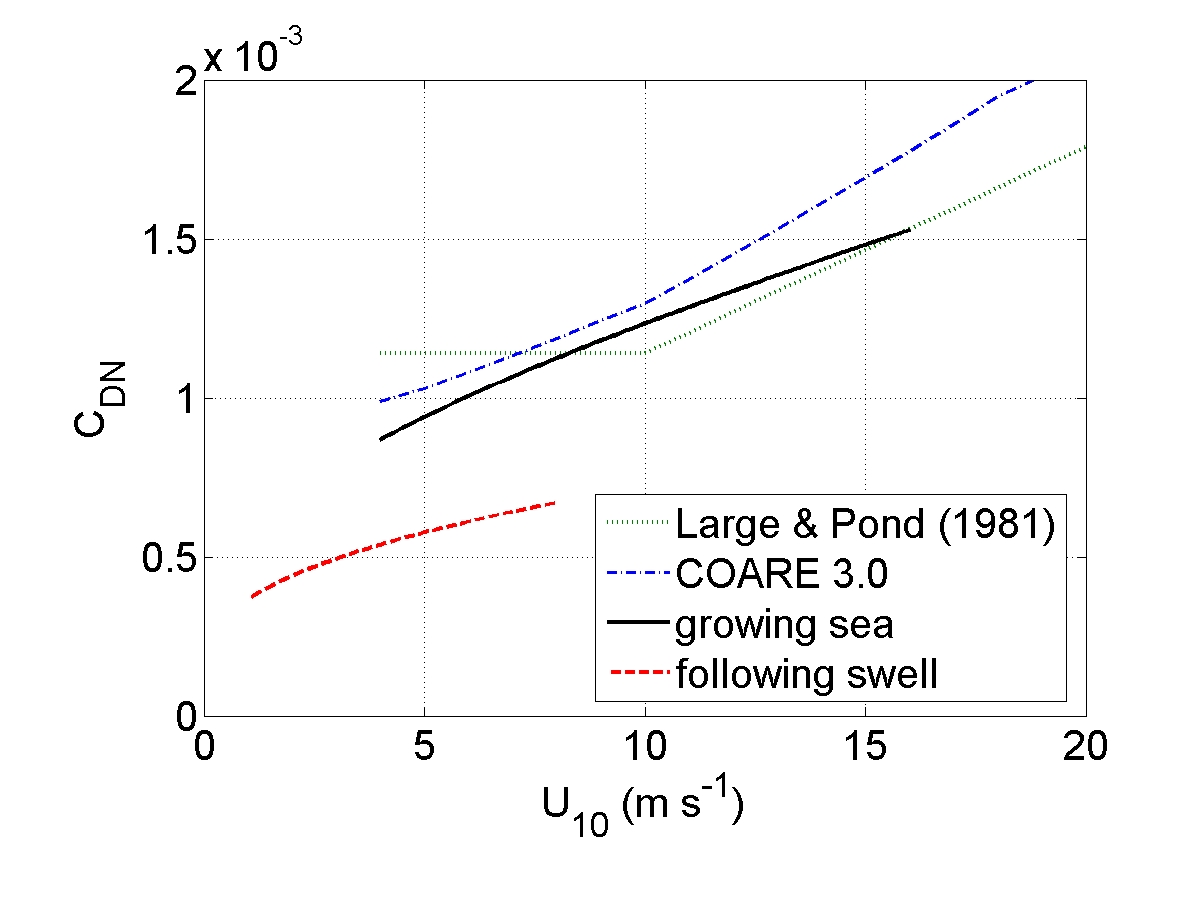