In 2018, the RELAMPAGO campaign took place amid Sierras de Cordoba in Argentina. That region is known for having some of the most intense severe weather in the world. The Sierras de Cordoba plays an important role in convective initiation (CI) of systems that later grow upscale and become storms with an extreme horizontal dimension (Rasmussen and Houze, 2016). During RELAMPAGO, CHIVO from CSU and CSAPR from ARM were on the east side of the Sierras. Both radars operating at C-band were located 80km apart. That provides the opportunity to observe the microphysics of systems that initiate in the Sierras and later move to the plains while growing upscale.

This paper presents the evolution in time of a convective system that initiated east of the Sierras and later grew upscale and merged with other systems forming one of the extreme horizontal systems that characterize the RELAMPAGO domain. The case of study is the IOP-17, which occurred during the night of Dec 13 and extended until the early morning of Dec 14. In general, CI poses a challenge for radar observation since convection usually initiates in complex terrain with a strong ground clutter component. Besides, the back-building nature of the study case makes it harder to distinguish young echos from second-trip echos. In this investigation, simultaneous observation from CHIVO and CSAPR is used to detect those unwanted echos.

From the evolution of the storm perspective, it started as an intense convective system on the west side of the Sierras moving eastward. When the system got closer to the Sierras from the west side, convective systems started initiation on the east side. That could be due to the perturbation of the west-side system produced in the other end of the Sierras while approaching it. That perturbation triggered convective initiation in the quasi-stable equilibrium on the east side of the Sierras. CHIVO, located on the east side, was taking RHIs and capture many CIs for that moment. Those RHIs provide a unique opportunity to observe the vertical evolution of those CIs. For example, fig. 1 shows a young cloud that develops significantly fast into a cell. From the top RHI, it is possible to see a small cloud right above the level of free convection (from CSU Radiosonde at 1 UTC). Ten minutes after (middle RHI), the system becomes a consistent cell with an increase in Zdr at the base. In the next RHI (bottom of fig. 1), the system gets more mature, and it starts developing a Zdr column inside.

In addition to the RHIs observation, Dual Doppler analysis from CHIVO and CSAPR also provides significant insights about the dynamics flows that favors the CI and up-growth scale. For example, low altitude Doppler winds show a significant North to South component that can be attributed to the South America Low-Level Jet (SALLJ). On the other hand, upper level winds show a strong component West to East that can be due to the influence of global circulation in the upper levels. The global circulation is pushing the system to the right while the SALLJ is feeding the system with moisture from the Amazon Basin. Which is consistent with conceptual ingredients that produce the severe storms in that region, but in this case observes in a microscale. 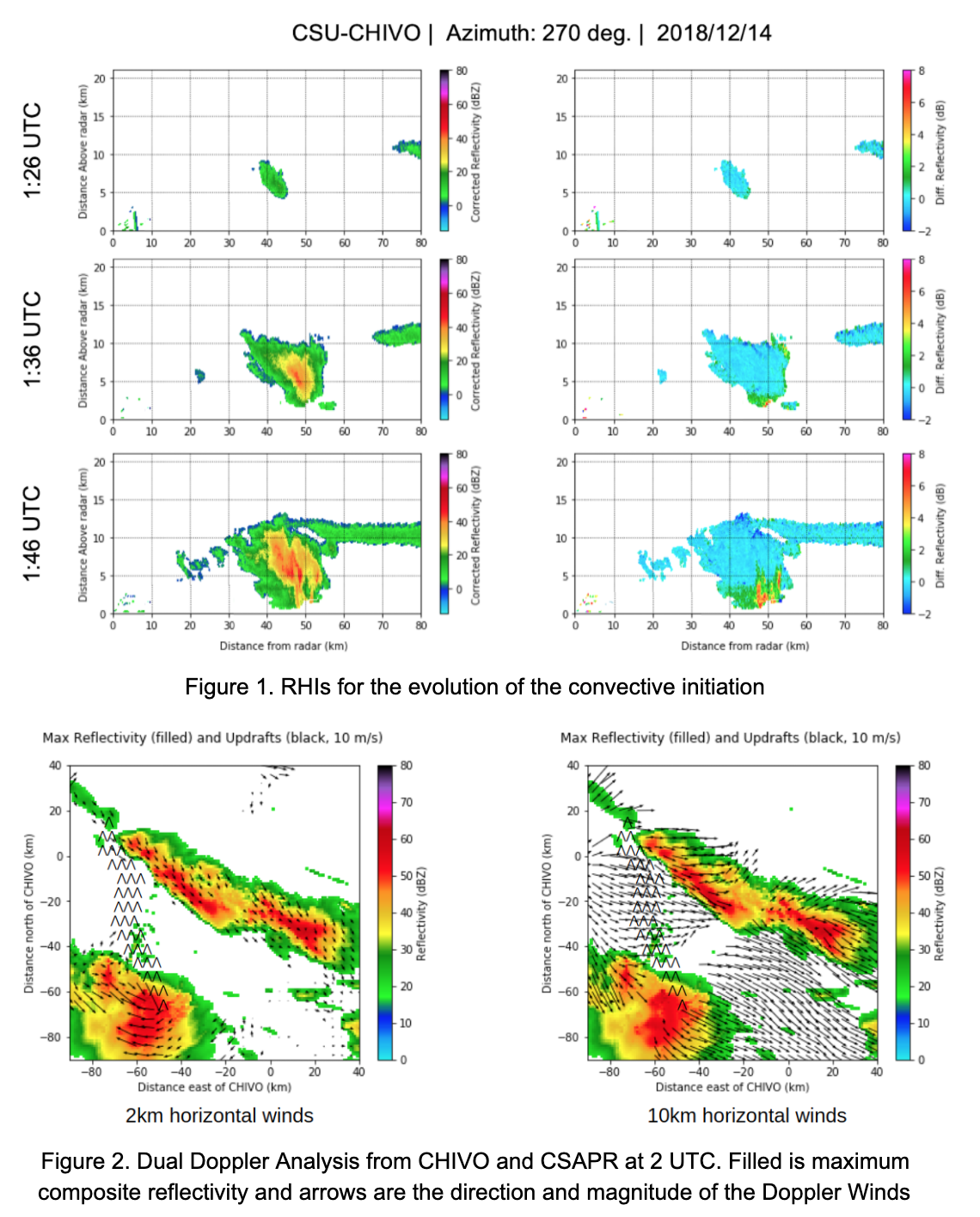