More
255 (Boston Convention and Exhibition Center)
Maksim Yu. Cherviakov, National research Saratov State University, Saratov, Russian Federation; and A. Spiryakhina, Y. Surkova, and E. Kulkova
This report describes Earth’s energy budget IKOR-M satellite program which has been started in Russia. The ﬁrst satellite Meteor-M №1 of this project was put into orbit in 2009. The IKOR-M radiometer is a satellite instrument which can measure reﬂected shortwave radiation (0.3-4.0 µm). It was created in Saratov University and installed on Russian meteorological satellites Meteor-M №1 and №2. Both satellite are heliosynchronous that allows observing from North to South Poles.

IKOR-M designed for satellite monitoring of the outgoing short-wave radiation at the top-of-atmosphere (TOA), which is one of the components of Earth’s energy budget. Such measurements can be used to derive albedo and absorbed solar radiation at TOA. This information also can be used in different models of long-term weather forecasts and in researches of climate change trends (Sklyarov et al., 2012).

The basic products of data processing are given in the form of global maps of distribution outgoing short-wave radiation, albedo and absorbed solar radiation (ASR). Such maps were made for each month during observation period (Fig. 1). The IKOR-M data records are available online at all times. A searchable catalogue of data products is continually updated and users may search and download data products via the Earth radiation balance components research laboratory website (www.sgu.ru/structure/geographic/metclim/balans) as soon as they become available.

Two series of measurements from two different IKOR-M are available. The ﬁrst radiometer had worked from October 2009 to August 2014 and second - from August 2014 to the present. Therefore, there is a period when both radiometers work at the same time. Top-of-atmosphere ﬂuxes deduced from the Meteor-M №1 measurements in August 2014 show very good agreement with the ﬂuxes determined from Meteor-M №2 (Bogdanov et al., 2016).

It was shown that the albedo and ASR data received from the radiometer IKOR-M can be used to detect El Nino in the Pacific Ocean. During the radiometer operation, there were two significant El Nino events.

Spatial-temporal distribution of the albedo in the equatorial part of the Pacific Ocean was analyzed. Region with high albedo values of 35-40 % is formed in the region 180E in January-February 2010 during El Nino event. It is associated with the development of a powerful convective cloudiness caused by the increase SST, at certain points the values can reach 45 %. The Nino 4 region is the most representative for detecting El Nino events (Cherviakov et al., 2016).

The report will be presented more detailed results. 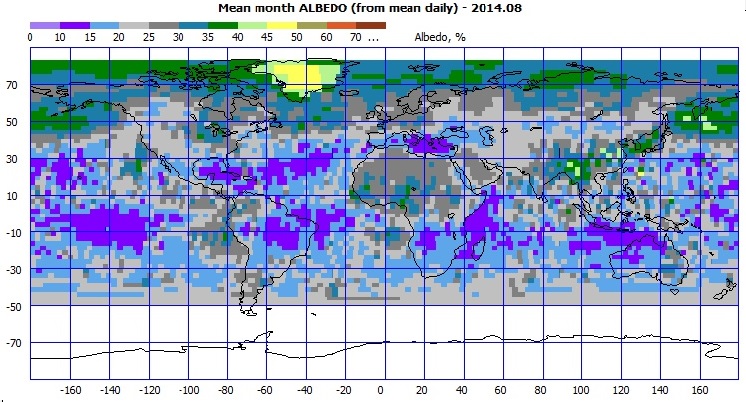