J1.1 Stratospheric Influence on Moist Convection in a Minimal Model of QBO-like Oscillation in a Stratosphere-Troposphere Coupled System

More
Salon F (Marriott Portland Downtown Waterfront)
Shigeo Yoden, Kyoto Univ., Kyoto, Japan; and H. H. Bui and E. Nishimoto
Recorded Presentation
A self-sustained oscillation which is dynamically analogous to the equatorial quasi-biennial oscillation (QBO) was firstly obtained as a radiative-moist-convective quasi-equilibrium state in a minimal model of the stratosphere-troposphere coupled system by Held et al.(1993), and the robust feature of the oscillation, not sensitive to the choice of model configurations or top and bottom boundary conditions, was confirmed by Yoden et al.(2014). The minimal model is a two-dimensional cloud-system-resolving non-hydrostatic model without Coriolis effect, under a periodic lateral boundary condition to permit the oscillation of zonal mean zonal wind. The QBO-like oscillation shows downward propagation of the zonal mean signals in the stratosphere as observed, and also the periodic variations of organized features of moist-convective systems associated with the periodic variation of the mean zonal wind in the troposphere. Alternative appearance of squall-line-type or back-building-type precipitation patterns modulates the spectral features of the vertical flux of horizontal momentum by tilted convection and upward- and downward-propagating gravity waves, as analyzed by Nishimoto et al.(2016).

In this study, downward influence of the stratospheric QBO-like oscillation to convection is further investigated with the same minimal model in two series of parameter sweep experiments; model top experiments and low-level nudging experiments. In the model top experiments in which deviations of all variables are nudged to zeros in the upper most layers of 5 km, QBO-like oscillations are obtained even in the low top experiments with oscillations of the mean zonal wind only in the troposphere (Fig.1). In the low-level nudging experiments, on the other hand, only the zonal mean component of the zonal wind is nudged to 0 m/s in a certain depth from the bottom boundary to investigate the impact of the vertical shear of the zonal mean zonal wind near the surface on the evolution of convective systems and the mean zonal wind oscillation. Two prominent cases of experiment are chosen for further composite analysis to reveal the convective structures in extremely heavy and light conditions of precipitation.

The results show that the QBO-like oscillation modulates the convection via two mechanisms related to the vertical shear of zonal mean zonal wind. Large values of shear near the surface enhance the longevity and intensity of the convective systems in the form of squall line type. On the other hand, large values of shear near the cloud top disrupt the convective structure and leads to a smaller amount of precipitation. The first mechanism seems to be dominated, as the second one is revealed only when the low-level shear is nudged to some certain levels. 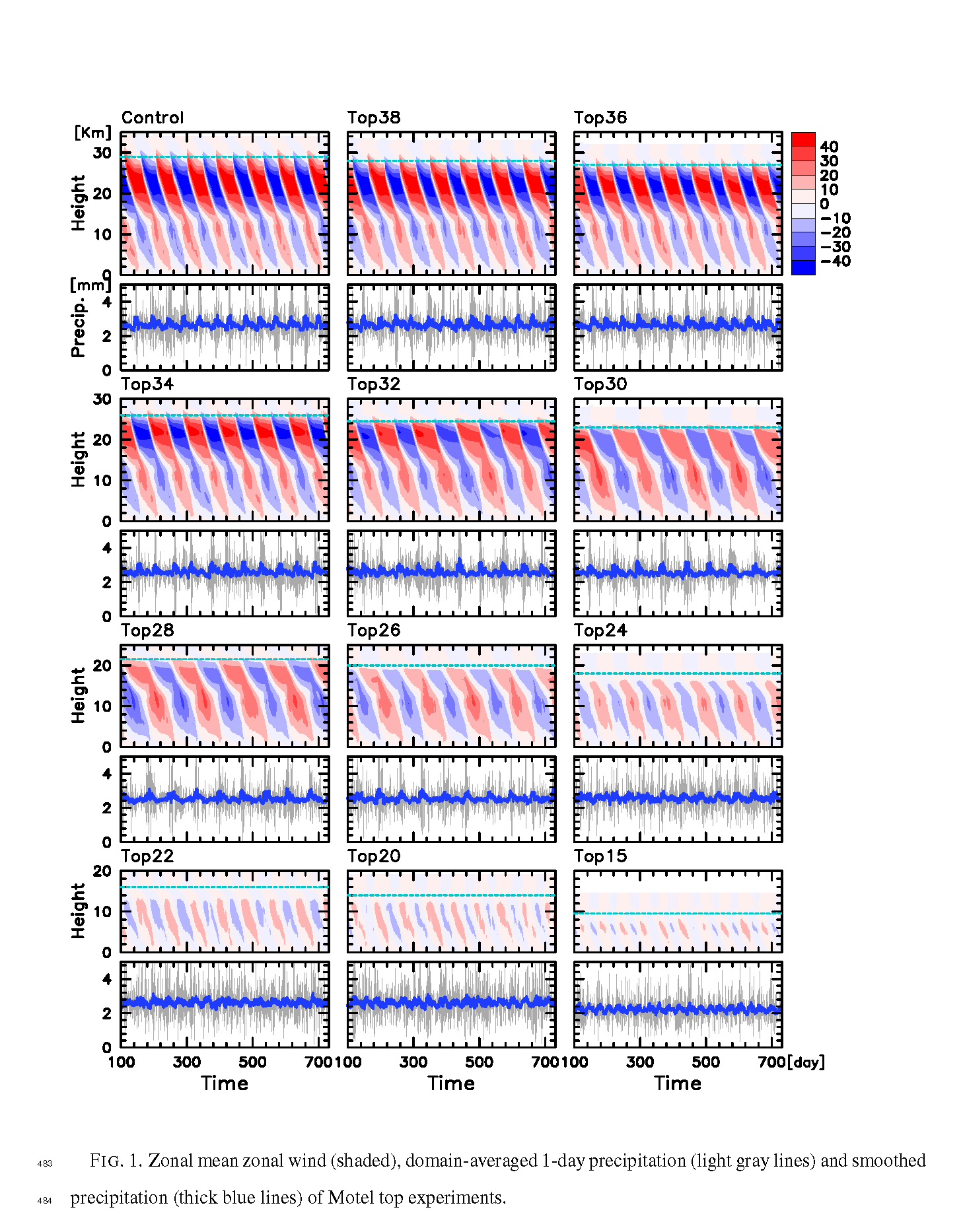