More
Salon A-E (Marriott Portland Downtown Waterfront)
Miguel A. Jimenez-Urias, University of Washington, Seattle, WA; and L. Thompson
Largely motivated by the North Atlantic inflow towards the Nordic Seas through the Iceland-Faroe Ridge, we investigate the boundary control on a flow across finite amplitude ridge topography with channel geometry, under a parameter range where barotropic instabilities develop. Driven by an equal source-sink each located away on opposite sides of the ridge, the equilibrated circulation results from a combination of advective vorticity fluxes (by the mean flow or eddies), and dissipative vorticity fluxes associated to surfaces of constant Bernoulli potential beginning or ending at solid boundaries.

In the time mean, the basic circulation is understood as follows: As the inflow reaches topography and the flow moves upslope, a western anticyclonic boundary current develops due to Rossby wave energy concentrating towards the western wall, or equivalently due to bottom pressure torque acting on the mean streamlines. The boundary current induces a local acceleration along the mean streamline, resulting in a reduction of the Bernoulli potential in the along-stream direction and thus a net cross-stream frictional vorticity flux from the wall. A similar situation occurs as the flow moves downslope. The reversed topographic slope now promotes a cyclonic boundary current at the eastern wall. The resulting local acceleration of the flow along the streamline results in a cross-stream vorticity flux towards wall, balancing the advective vorticity flux along the ridge.

Along the ridge, barotropic eddies separate from the western boundary current, extracting and advecting large cyclonic relative vorticity from the wall. As they move towards the eastern boundary current along topographic contours, these eddies experience dissipation due to bottom friction. Frictional vorticity production, which can be written as the integral of the Bernoulli potential along solid boundaries, allows for the examination of the role of eddies on the mean flow. In addition, we present a complementary analysis comparing our results at different spatial resolutions that allow eddies to develop, as well as contrasting the choice of free slip and no-slip boundary conditions. 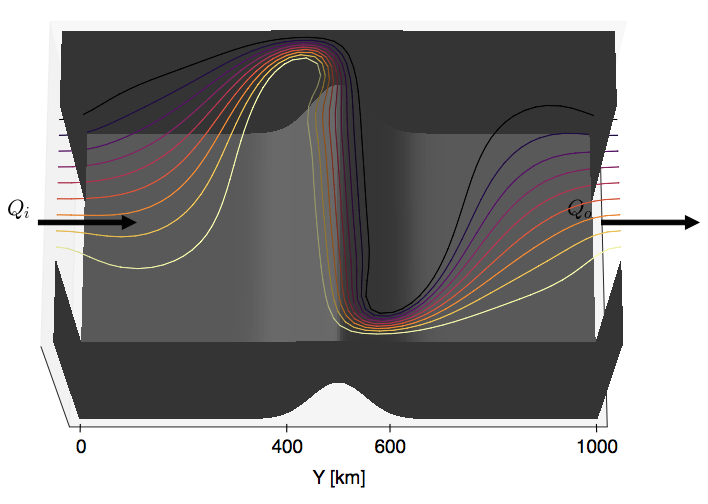