159 Evolution of a Front in Turbulent Thermal Wind (TTW) Balance

More
Salon A-E (Marriott Portland Downtown Waterfront)
Matthew N. Crowe, University of Cambridge, Cambridge, United Kingdom; and J. R. Taylor
Fronts, or regions with large horizontal density gradients, are common features of the upper ocean. Ocean fronts are hotspots for air/sea exchange and marine life. Observations indicate elevated levels of small scale turbulence at fronts, which nevertheless often have a stable density stratification. The dynamical processes that govern this stratification are not well understood. We consider the evolution of an initially balanced front to an imposed turbulent viscosity and diffusivity. Over long times the dominant balance is found to be the quasi-steady Turbulent Thermal Wind (TTW) balance with time-evolution due to an advection-diffusion balance in the buoyancy equation. We use the leading order balance to analytically determine similarity solutions for the spreading of a front and compare our results with numerical simulations.

When the turbulent viscosity and diffusivity are relatively small, the horizontal density gradient intensifies at early times through frontogensis associated with the TTW flow, a result consistent with recent work by McWilliams [1]. However, when the viscosity and diffusivity are sufficiently large, the front spreads through shear dispersion associated with the vertical diffusivity and the vertical shear of the cross-front velocity. The spreading rate is a function of the Ekman number, and the fastest spread occurs for moderate values of the Ekman number. Further, we find that the density evolves towards a piecewise linear profile in the cross-front direction with a relatively constant gradient inside the front and large curvature at the edges of the front (see Figure 1). The vertical velocity is intensified in the regions of large curvature at the edges of the front, consistent with the instantaneous TTW balance. 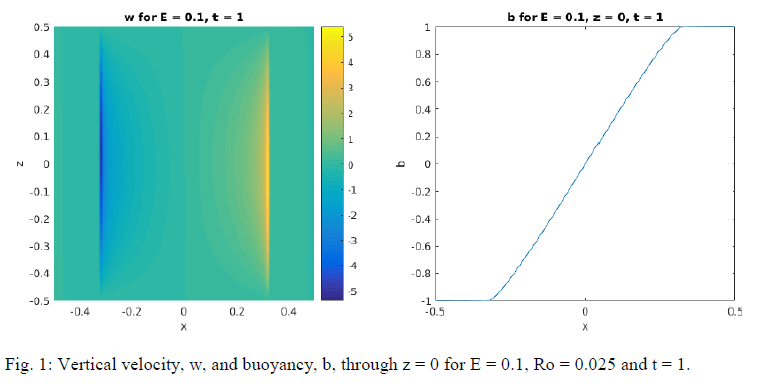