More
Salon F (Marriott Portland Downtown Waterfront)
B. Helen Burgess, University of St Andrews, St Andrews, United Kingdom; and R. K. Scott and D. G. Dritschel
Recorded Presentation
We consider the formation and structure of zonal jets in forced equivalent barotropic turbulence on a midlatitude beta plane and provide a complete predictive theory for the jet spacing at arbitrary Rossby deformation length, extending previous results for barotropic dynamics. Three natural length scales arise in the system and can be used to describe the entire range of possible jet regimes: the traditional Rhines scale, a forcing based measure of anisotropy, and the Rossby deformation length. The forcing itself is assumed to act at small scales, well separated from the three dynamical scales. The
range of behaviour is investigated in two separate numerical frameworks, both with and without damping at large scales; in the case without large-scale damping the evolution is quasi-stationary and permits an efficient exploration of parameter space.

Jet regimes are identified in terms of the potential vorticity structure, with strong jet regimes corresponding to potential vorticity that is well mixed in distinct regions between jets with strong gradients in the jet cores, the so-called potential vorticity staircase. As for the barotropic case studied previously, a strong jet regime emerges when the ratio of Rhines scale to forcing anisotropy scale exceeds a certain threshold, but here the value of the threshold is found to be smaller when the deformation length is significantly less than the Rhines scale. Importantly, the strong jet regimes obtained at small deformation length are obscured in the traditional zonal mean due to strong jet meanders in the latitudinal direction, which develop due to the shorter-range nature of the potential vorticity-streamfunction relation. In these cases, an equivalent latitude based coordinate highlights the jet structure and reveals an even stronger tendency for pronounced staircasing of the potential vorticity than in the barotropic case. Accounting for the jet meanders, and noting that most kinetic energy resides in the jet cores themselves, enables a prediction for the jet spacing in terms of Rhines scale and deformation length, generalizing the relation between jet spacing and Rhines scale obtained in the barotropic case. The development of strong jet meanders is additionally linked to the partition between kinetic and potential energy.

At small deformation length, as the strength of the forcing increases, latitudinal jet meanders become larger. The jets interact with strong vortices, which promote pinching off of large meanders into `loop jets' wrapped around vortices. These loops can persist for long times and ultimately rejoin the main jets spanning the domain. As forcing strength increases even further, eventually, the loop jets are in turn replaced by a field of intense vortices. As the degree of zonal alignment decreases, potential vorticity remains uniformly mixed in distinct regions surrounding the loops jets and vortices, and the concept of the staircase distribution remains a useful means of categorizing the flow. 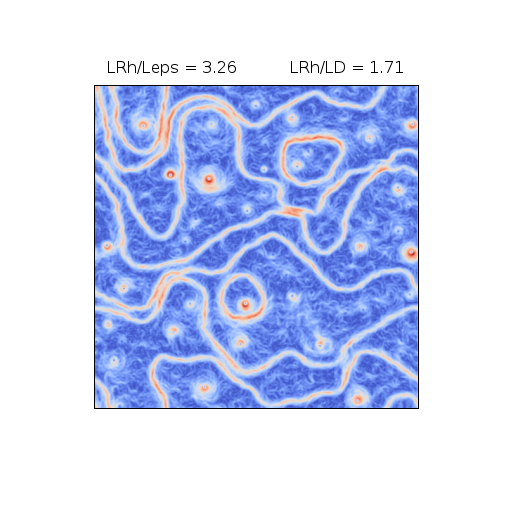