More
Salon A-E (Marriott Portland Downtown Waterfront)
Noah D. Brenowitz, New York University, New York, NY; and A. J. Majda
Atmospheric dynamics in the tropics features a hierarchy of multiscale
interactions related to cumulus convection. Synoptic scale and planetary
scale phenomena such as convectively coupled waves and the Madden Julian
Oscillation are often described as envelopes of smaller scale convective
activity. This multiscale structure is readily apparent in two dimensional
cloud resolving simulations, where synoptic scale convectively coupled
gravity waves contain many mesoscale squall-line structures which propagate
in the opposite direction. To highlight these dynamics, we perform a 100 day
long two-dimensional simulation using the System for Atmospheric Modeling
(SAM) in a 30,000 km domain with homogeneous sea surface temperature (SST),
a -10 m/s background zonal wind, and fixed radiative cooling. These
simulations show that the synoptic scale waves ultimately collaborate to
produce a planetary scale propagating disturbance. This three scale
structure is also present in simulations with a planetary-scale SST pattern
designed to mimic the so called warm-pool near the Indonesian maritime
continent. If these simulations are performed on an f-plane situated at 6
degrees N, a representative latitude of the Boreal summer ITCZ, the
planetary scale structure is diminished in favor of the mesoscale and
synoptic scale. This is consistent with previous results using an idealized
multicloud model for tropical convection.

At the same time, a series of rigorous theories using multiscale asymptotic
analysis, such as the Intraseasonal Multi-scale Moist Dynamics (IMMD) and
Mesoscale Equatorial Synoptic-scale Dynamics (MESD) models, have been
developed to explain these kind of structures. Both of these theories
conclude that the large-scale dynamics are forced by the divergence of a
small-scale eddy flux while the eddy quantities are advected by the
large-scale flow. In this work, we develop a data analysis technique for
applying these theories to the SAM model outputs. We assume that the
mesoscale features do not directly impact the planetary scale, so that the
three-scale structure of the SAM runs can be explained by mesoscale-synoptic
interactions followed by synoptic-planetary interactions. A piece-wise
polynomial spline basis is used to define a suitable large-scale Reynold's
average, which is then used to check the consistency of the IMMD and MESD
theories with the SAM simulations. We then diagnose the eddy-flux quantities
in the MESD (IMMD) models to infer the mesoscale-synoptic
(synoptic-planetary) interactions. Because these simulations do not use
interactive radiation, this work highlights the importance of eddy-fluxes of
momentum, temperature, and moisture in the large-scale organization of moist
atmospheric convection. This mode of organization fundamentally contrasts
with the convective self-aggregation observed in small-domain
three-dimensional radiative convective equilibrium (RCE) experiments. 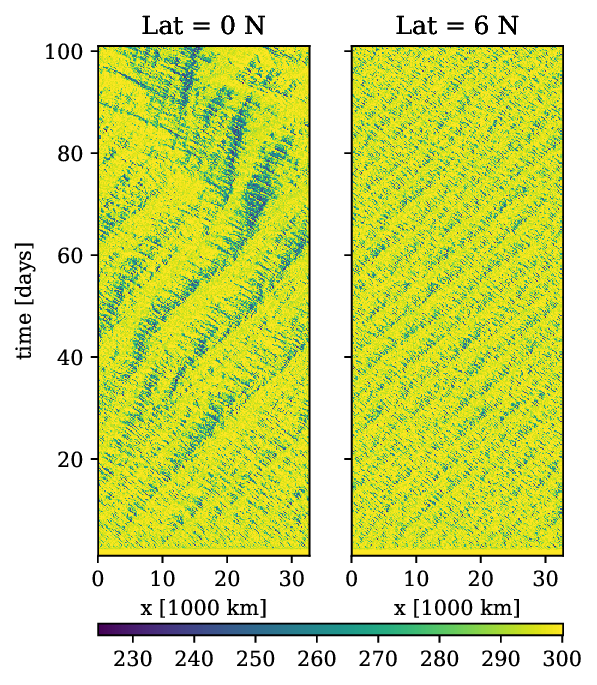