167 The Physics of Inertial Oscillations: Free Motion on a Parabolic Dish

More
Salon A-E (Marriott Portland Downtown Waterfront)
Christopher L. Wolfe, SUNY, Stony Brook, NY, NY
Motions with frequencies near the inertial frequency are ubiquitous in the ocean. Much of this motion can be described in terms of so-called inertial oscillations: a steady rotation of the velocity vector which has no signature in the pressure field. Even though covered in introductory textbooks, inertial oscillations are still a source of some confusion in the geophysical literature—since they are not straight lines in an inertial reference frame far from the Earth, the 'inertial' nature of inertial oscillations has been questioned. This issue is explored in detail by Early (QJRMS 2012), who shows that the motion tangent to the surface of the Earth is indeed inertial, in the sense that an accelerometer executing inertial oscillations would record no accelerations tangent to the Earth's surface. While Early's argument is compelling, demonstration of the inertial nature of inertial oscillations is hampered by the large space and time scales necessary for the Coriolis effect to significantly affect motion on the Earth.

The free surface of a fluid-filled dish assumes a parabolic shape when spun about its vertical axis. If filled with a material that hardens while spinning, the resulting parabolic dish provides a laboratory analog for free motion near the Earth's surface. This fact was pointed out by Satoshi Sakai and used to demonstrate inertial oscillations as part of the "Weather in a Tank" teaching module produced by MIT. These demonstrations use the fact that, for small curvatures and small-amplitude motion, a rotating parabolic dish can be approximated by an f-plane. However, the restriction to f-plane-like dynamics obscures the physics of the inertial oscillations. Further, allowing the possibility of large curvatures and amplitudes leads to significantly richer behavior.

Exact solutions for free motion on a parabolic dish are presented and their behavior examined in both the laboratory and co-rotating frames. These solutions have a different mathematical structure than those previously presented for free motion on a rotating planet because the intrinsic curvature of a paraboloid is opposite that of a sphere. The behavior of the exact solutions is compared to those obtained through the f-plane approximate. In particular, the exact solutions precess around the rotation axis, leading to the equivalent of a β-induced drift in the co-rotating frame. 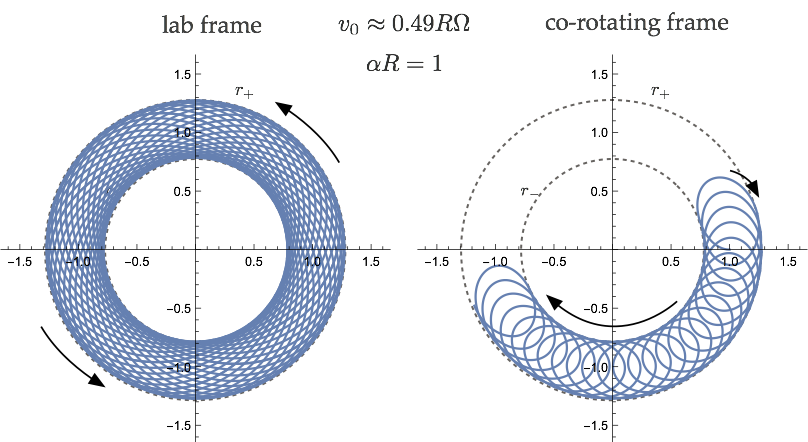