151 Mongolian Mountains Matter Most: The Impacts of Asian Orography on Downstream Atmospheric Circulation and Variability

More
Salon A-E (Marriott Portland Downtown Waterfront)
Rachel H. White, University of Washington, Seattle, WA; and D. S. Battisti and G. H. Roe
We explore the impacts of Asian orography on the wintertime atmospheric circulation over the Pacific using altered-orography experiments in two different general circulation models. The Mongolian plateau and nearby mountain ranges, centered at ~48N, have an impact on the upper-level wintertime jet stream that is approximately four times greater than the more expansive, and taller Tibetan plateau and Himalaya to the south. This can be seen clearly in the abstract figure, which shows the 250mb zonal wind response to the Mongolian mountains (upper), and the Himalaya/Tibetan plateau (lower); the removed orography is contoured with dashed lines. Key contributing factors to the importance of the `Mongolian mountains' are latitudinal variations in the meridional potential vorticity gradient and the strength of the impinging wind - both of which determine the amplitude of the atmospheric response - and the structure of the atmosphere, which influences the spatial pattern of the downstream response. We look at the variability of the downstream response to orography, finding that, while the Mongolian mountains produce a larger response than the Tibetan plateau in northern hemisphere winter, in April-June the response from the Tibetan plateau predominates. We study the role these mountain ranges play in climate variability over the Pacific and North America. 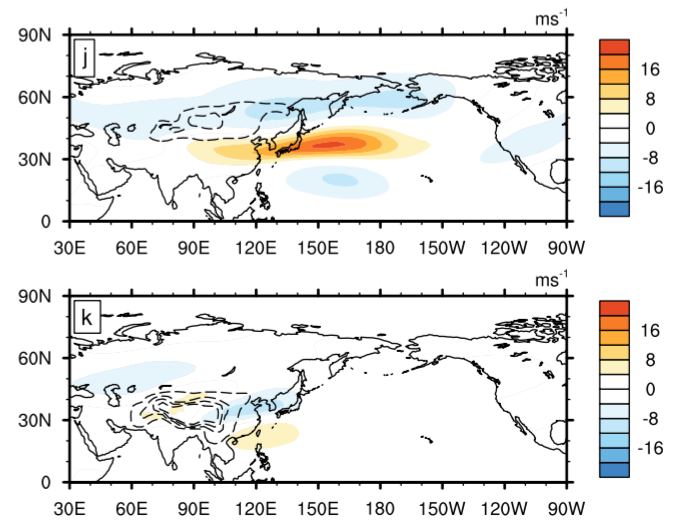