1.6 Eddy Saturation in a Barotropic Model

Starting from the work of Charney & DeVore [J. Atmos. Sci., 36, 1205-1216, (1979)] a series of low-dimensional truncated models were advanced for the study of zonal flow-topography interactions. Our barotropic model recapitulates many of the features identified by these low-dimensional models. With open geostrophic contours, we find both a lower and an upper branch consisting of stationary solutions, multiple stable equilibria as well as a sudden transitions between the two branches as wind stress strength varies. However, in addition our model also predicts a fully turbulent regime with strong transients that is not captured by the low-dimensional models. This turbulent regime shows impressive eddy saturation: only 4-fold transport increase over 60-fold wind stress increase. Furthermore, in the eddy saturation regime the eddy kinetic energy increases linearly with wind stress and also the mean transport increases with increasing Ekman drag. Both these feature are symptomatic of eddy saturation in comprehensive models of the ACC. We explain the various flow transitions that occur in the case with open geostrophic contours by studying the stability of the flow, extending the stability method initially presented by Hart [J. Atmos. Sci., 36, 1736–1746, (1979)]. 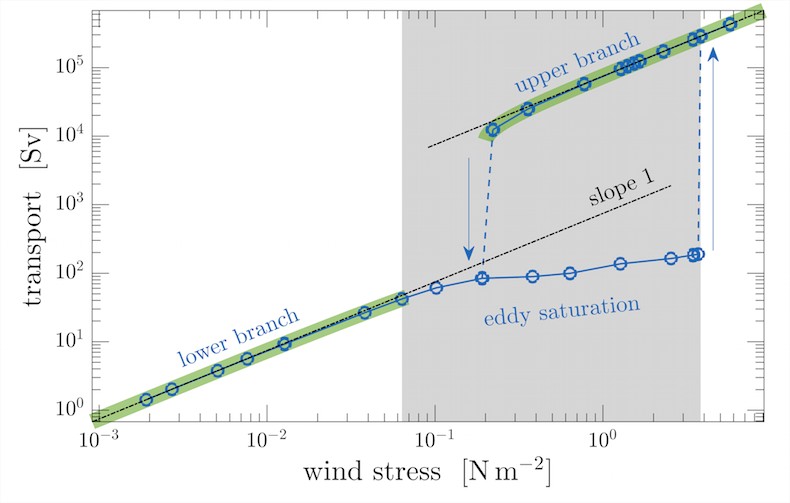