Christopher Pöette, Barry Gardiner, Sylvain Dupont, Yves Brunet, Ian Harman, Margi Böhm, John Finnigan, Dale Hughes Flow changes in the atmospheric boundary-layer across surface roughness changes have received extensive study in the past because of their importance in determining velocities, turbulence levels and exchange between the atmosphere and biosphere or ground. There have also been a number of studies across single forest edges both in the field, wind-tunnels and computer models. However, there have been no studies of flow across multiple forest edges or the impact of forest fragmentation on the characteristics of the boundary-layer. The only studies on multiple surface changes have been wind-tunnel examination of the flow though and across multiple wind-breaks. In this paper we show results from a series of wind tunnel and Large Eddy Simulation (LES) experiments on a range of levels of forest fragmentation. The fragmentation was two-dimensional with the transition between forest and gaps only being along the wind direction and the forest and gaps were continuous perpendicular to the wind direction. The wind speeds and turbulence characteristics are compared against measurements from a single forest edge in the wind tunnel, which acts as a reference. We also compare mean wind speeds (U and W) and turbulence characteristics (variance in u, v, and w; skewness in u, v, and w; Reynold's stress, and TKE) at all points in the experimental measurement domain of the wind tunnel (Figure 1 and Figure 2) with the LES results, which allows us to confirm the validity of the LES calculations and to conduct a wider range of experiments than was possible in the wind-tunnel. The results demonstrate the importance of the frontal area index or roughness density of elements (in this case trees) in determining the nature of the flow and the effective roughness of the overall surface. They also show that as the gaps between forest blocks increases the flow transitions (at a gap size between 10 to 15 tree heights) from flow comparable to that over a continuous forest to flow across a set of isolated forest blocks. The data also show that dispersive fluxes become increasingly important as the gaps increase and the impact of each edge on the flow becomes more intense. 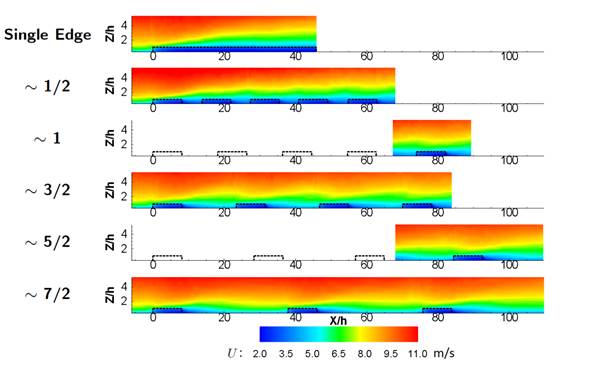 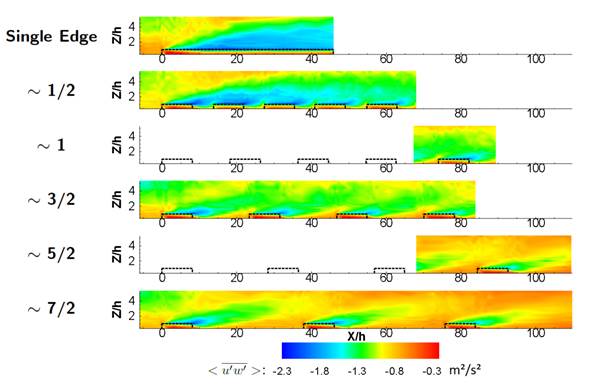 Figure 2: Reynold's stress across different levels of fragmentation in the wind tunnel