More
Bryce (Sheraton Salt Lake City Hotel)
Seyed Hossein Hezaveh, Princeton University, Princeton, NJ; and E. Bou-Zeid, J. Dabiri, M. Kinzel, and L. Martinelli
Wind power is one of the leading sources of clean energy in terms of growth. Vertical axis wind turbines (VAWTs) are being reconsidered as a complementary technology particularly suitable for deploying in offshore farms. These wind Turbines have several advantages compared to horizontal axis wind turbines (HAWTs). They operate with wind from any directions (omni-directional), and their generators and gearboxes are located at ground level, which lowers their centers of mass and reduces their construction and maintenance costs compared to horizontal ones. One of their most important advantages compared to HAWTs is their potential synergistic interactions that increases their performance when placed in close proximity. Field experiments have shown that unlike HAWTS, vertical axis wind turbines enhance and increase the power production rate when placed near each other. Furthermore, due to the flow deviation by upstream turbines, the higher induced velocities can increase the power production in downstream turbines.

Based on these experiments and using an actuator line model in a large eddy simulation code (ALM-LES) that we have previously tested in Hezaveh et al. [1], we present and test new approaches for VAWT farm configuration. We first design clusters with three turbines each that i) exploit the omni-directional capability of VAWTs, and ii) optimize the distance L between the cluster turbines relative to the turbine diameter D. The results indicate that a triangle cluster design with L/D=5 is the most suitable: its average cluster power coefficient CP over all wind direction is 1.1×CP, isolated turbine. This means that this design is producing 10% more power compared to three isolated turbines. Using this triangle cluster design as the basic farm element, we then proceed to configure several large wind farms with different cluster spacing and layouts (aligned and staggered) and simulate them using the ALM-LES. The average wind farm CP values for these farms are then compared to regular wind farms with similar wind turbine spacings. In the figure, the average CP of regular wind farms with turbine spacings of 10D and 20D are compared with those of wind farms using the triangle clusters, with cluster spacing of 10D and 20D. The results confirm that using a cluster design, the average power coefficient of wind farms can be increased by as much as 60% relative to regular arrays. Not only is each turbine extracting more of the available wind power, but also the cluster designs allow closer turbine spacing: the proposed cluster configuration have three times the number of turbines for a given land area compared to the regular configurations. Our results confirm that VAWTs have positive influence on each other when placed in close proximity in well-designed clusters, and this can significantly increase the power density per land area. 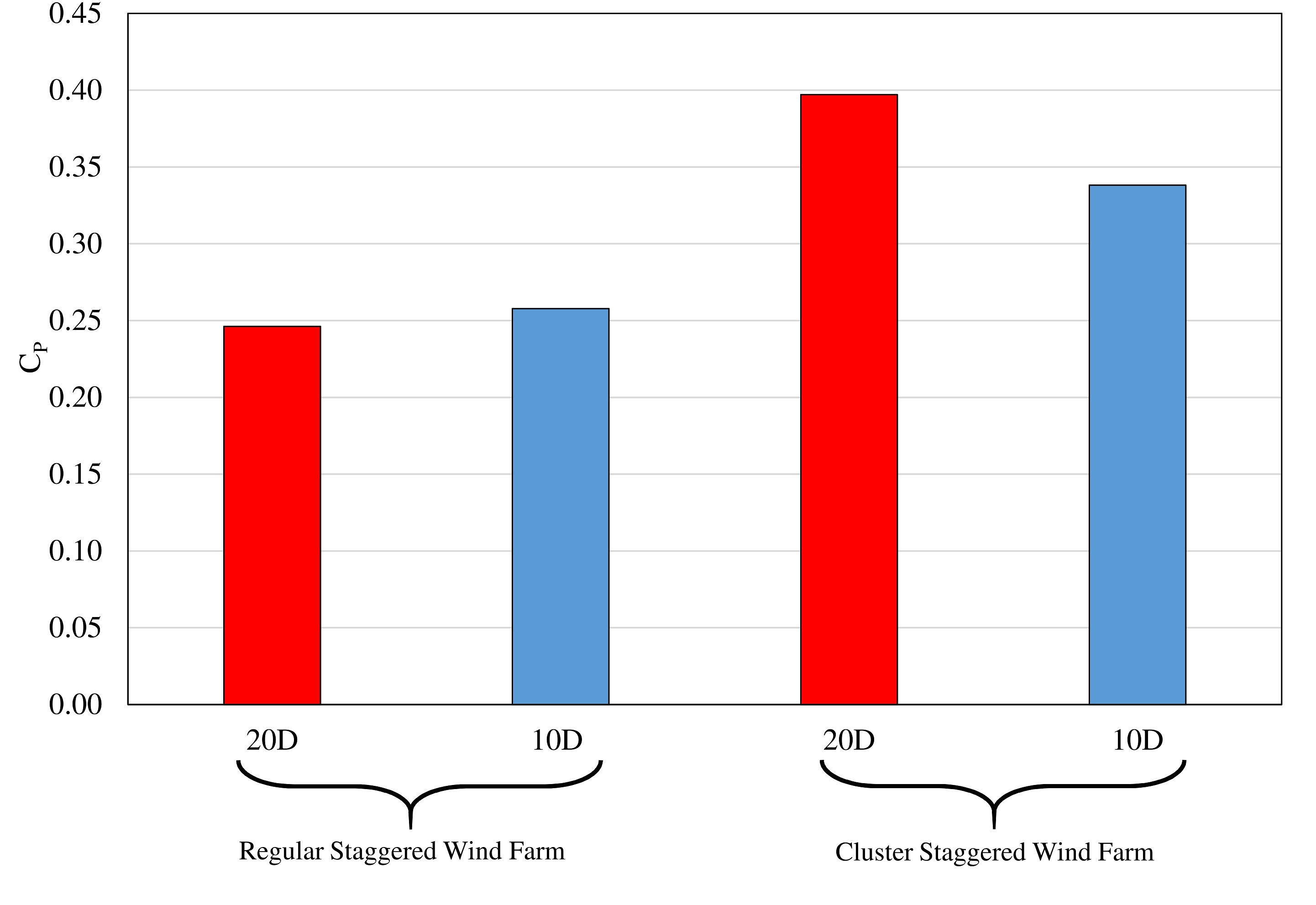