We introduce here an ongoing study funded by the U.S. Department of Energy and the National Oceanic and Atmospheric Administration that is attempting to improve the performance of wind energy forecasting in areas of complex terrain.  This is a multi-year, multi-institution effort that includes both a prolonged observational campaign as well as analysis and development of forecast models.

The availability of high-quality wind speed forecasts increases the value and acceptance of wind energy into today's dynamic energy markets.  Reducing the errors associated with wind forecasts impacts both unit commitment and dispatch of generation assets, and both grid operators and wind energy producers would benefit from improvements to existing systems, in particular the numerical weather prediction (NWP) models that produce the foundational data for wind forecasts. However, while NWP models are excellent at forecasting general weather, they have traditionally been optimized for temperature and precipitation, and less so for wind, particularly at the operating heights of modern turbines (60m to 200m above the ground).   The problem is particularly acute in the areas of complex terrain common to wind energy development, where several fundamental assumptions used in model development are violated.

The project described here focuses on understanding and addressing deficiencies in an existing NWP through an observational campaign and subsequent model development.  We know that mesoscale atmospheric structure drives the microscale wind plant inflow, but the scales at which the mesoscale flow interacts with the local terrain are not well represented.  Conventional parameterizations not scale-independent (or scale-aware), and specifically are not designed to capture heat flux or moisture variability on high-resolution grids or in complex terrain.   Mesoscale models often assume stationarity and horizontal homogeneity of subgrid-scale processes.

1.     To improve the physical understanding of atmospheric processes that directly impact wind energy forecasts in areas of complex terrain.

2.     To incorporate the new understanding into a foundational weather forecasting model in order to improve wind energy forecasts.

In support of these goals, the participants in WFIP2 are conducting an eighteen-month field campaign to assess how physical processes over a broad range of spatial scales alter wind speeds across the rotor diameter. From this research, the team will work to develop physical modeling methods and atmospheric theories that can be incorporated in foundational weather models to improve wind forecasting. The results of implemented changes will be evaluated through assessment of the improvement in forecast skill and the economic impact of these improvements.  Finally a set of decision support tools will be developed to facilitate the operational use of improved forecasts.

The study area is located in the Columbia River basin, in one of the most heavily developed wind-energy regions in the world.  High penetrations of up to 50% wind at off-peak times challenge system operations, and costs associated with both upward and downward wind ramps ensure that any improvements will have a meaningful economic impact.   At the same time, the physical phenomena explored in this study occur in many regions of complex terrain throughout the world.  Specific atmospheric features that occur in the area include orographic lee waves, mountain wakes, and gaps flows, and more widespread phenomena such as frontal passages, convective outflow, and elevated jets interact with the terrain in interesting ways.

Because of the wide range of scales involved in the atmospheric phenomena, a cascading set of observations has been implemented, as shown in Figure 1.   The overall area is hundreds of kilometers across, and the smallest scales of interest include the sub-grid variability within a single mesoscale model grid cell.  Instruments include a wide variety of vertically profiling and scanning remote sensing equipment, as well as in situ devices. Data collection began in the fall of 2015, and will continue until the spring of 2017.

As observations are collected, phenomena are being catalogued for use in analysis and model development.  NOAA has developed a web page (http://wfip.esrl.noaa.gov/psd/programs/wfip2/ ) to display real-time observations and compare them to ongoing forecast simulations, and data is being archived at DOE's Data Archive and Portal ( https://a2e.pnnl.gov/data ).

Model development for the project is being conducted using Weather Research and Forecasting (WRF-ARW) model, with a focus on improving underlying theory for parameterizations in active in the surface and boundary layers.  Because current surface-layer theory (Monin-Obukhov Similarity Theory) is based on clear sky conditions in flat terrain, and boundary layer parameterizations ignore horizontal gradients, we see a need to develop new methods that account for horizontal heterogeneity.   These include implementation of a three-dimensional boundary layer scheme, and use of improved topography via the Immersed Boundary Method (IBM).

Finally, the project will develop new decision support tools to assist in conveying the stochastic nature of specific phenomena.  Fully probabilistic alerts will be issued, and we must also work closely with our industry partners to design tools that assist operators in choosing appropriate actions in response to these alerts.

While the WFIP2 project is still in its early stages, observations are already being collected and publicly disseminated, and several interesting events are already present in the data set.  We look forward to broad use of the data. 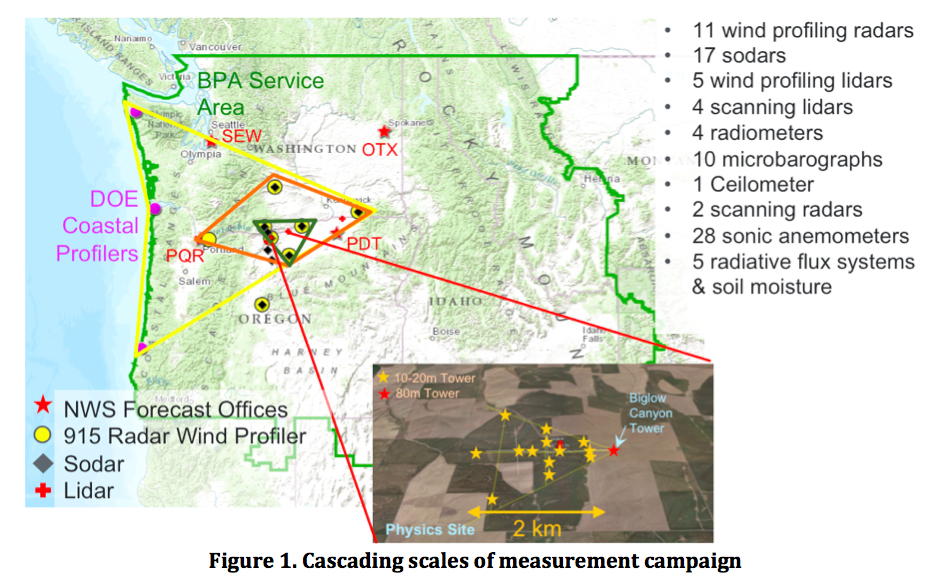