Rainfall observations with weather radar have a great advantage in the point that it is possible to observe precipitation widely in a short time. However, the precipitation from the conventional weather radar output does not necessarily correspond to that from the instruments on ground such as rain gauge. One of the most causes of these disagreements is that the conventional radars cannot acquire the high range-resolution profiles of precipitation in low altitude. Because these range-resolution is mainly tens of meters and these antenna are mono-static.

In this study, high temporal and spatial resolution radar for meteorological application has been developed and tested. The radar utilizes the broadband signal of 80 MHz bandwidth at the 15.75 GHz central frequency using the bi-static cassegrain antenna, and can accurately acquire the vertical profile of the Z-factor with high resolution from low altitude. In this radar system, we use the Arbitary Waveform Generator (AWG) to make the signal for transmitting, and directly digitize the IF-signal of the received echo. On the PC, we perform the pulse compression processing, which is that we spread the transmitted pulse out in time and then processes the received echo with a matched filter to despread it, therefore, we can obtain high range resolution and high SNR. The FM chirp signal in the 20 to 100 MHz frequency range, that the pulse width is 128 us, is generated by the AWG, upconverted to 15.71  15.75 GHz, and amplified to about 100 mW. The downconverted signal is sampled by the 12 bit/ 400 MHz digitizer. In the pulse compression processing, we processed the cross-correlation between the received and the reference signal. The reference signal is pre-sampled in the state of directly connecting the transceiver output of the transmitting end to the input of the receiving end through the attenuator. In the cross-correlation processing, we perform the FFT to the received signal. Before the FFT processing, the data is converted the complex data consisting of the in-phase (I) and the quadrature (Q) components using the Hilbert transformation.

The installation location of the broad band radar is in the campus of the Osaka Prefecture University, Osaka, Japan. At the site, we have been observing the rainfall event continuously in vertically looking mode from August, 2004. On September 21, 2004, some thunderstorms overpassed the campus and the convective type rainfall events were observed. In this observation, the pulse repetition frequency was about 6.8 kHz and the number of the successive pulses was 64, enabling the in-coherent integration and the extracting of the doppler shift.

Theoretically, the range resolution should be about 1.9 meters. However the transmitted signal is the chirp signal that the Blackman-Harris window function is multiplied, and the range side lobe is suppressed. But the main lobe width broadens and so the range resolution degrades. As a result of this trades off, the actual range resolution of the radar is about 4m from the scattering experiment for a few metal plate as targets.

In figure 2, the time expanded picture of the reflectivity profile versus time is shown. It is shown that the intense rain is falling with a slope in time. This is probably due to the advection of the rain area. From the correlation analysis of the reflectivity by the radar at 40 m in height and the disdrometer on ground, it is shown that the radar accurately observes the scattering signal from rain drops with the correlation coefficients of 0.98. 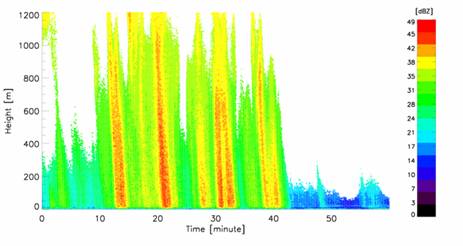