The National Research Institute for Earth Science and Disaster Prevention (NIED) in Japan developed a multiparameter radar at the X-band wavelength (MP-X) for hydrological and meteorological application (Iwanami et al. 2000). A Nudging procedure for the assimilation of the mixing ratio of rain and horizontal wind components obtained by the MP-X and Doppler radar in Chuo university (CHUO) has been developed in order to improve short-range forecast in this study. The procedure was applied to the Cloud resolving storm simulator (CReSS) developed at Nagoya university (Tsuboki and Sakakibara, 2002). In order to investigate the sensitivity of various observational parameters obtained by the multiparameter radar to the maintenance of a precipitation system, we applied the procedure to the isolated thunderstorm observed over the Kanto plain in Japan on 15 July 2006.

Dual-Doppler radar analysis using MP-X and CHUO (Fig. 1) was conducted to retrieve three-dimensional wind field from 12:00 to 12:30 Japan Standard Time (JST) every 5 minutes with 1 km resolution in horizontal and 0.25 km in vertical. The reflectivity and storm-relative wind filed at a height of 2 km were indicated in Fig. 2. A hook echo and strong vertical vorticity over 0.004 s-1 were observed from 1200 to 1230 JST. The isolated thunderstorm maintained until 1330 JST Four combinations of observational parameters to be nudged to CReSS were (1) horizontal wind below 3 km in height (experimental name: UV ), (2) mixing ratio of rain estimated by reflectivity (R), (3) both horizontal wind below 3 km in height and mixing ratio of rain estimated by reflectivity (UVR), (4) same as (3) except that initial vapor filed in the region where the observed reflectivity was over 0 dBZ was forced to be saturated (UVR-QV0). All the experiments of CReSS were performed with a horizontal resolution of 1 km and 45 vertical levels. Forecasts of Japan meteorological agency meso-scale model (JMA-MSM) which has a 5 km resolution in horizontal were used as initial and boundary conditions for the CReSS. Integration of CReSS was conducted from 1200 to 1500 JST. Nudging procedure was performed from 12:00 JST to 12:30 JST.

The nudging procedure of CReSS using multiparameter radar dataset could provide short-range forecast within 1 hour and a half using mixing ratio of rain and horizontal wind fields below 3 km in height. The mixing ratio of rain estimated by KDP will be nudged to this nudging system and the effect will be compared with the present result. 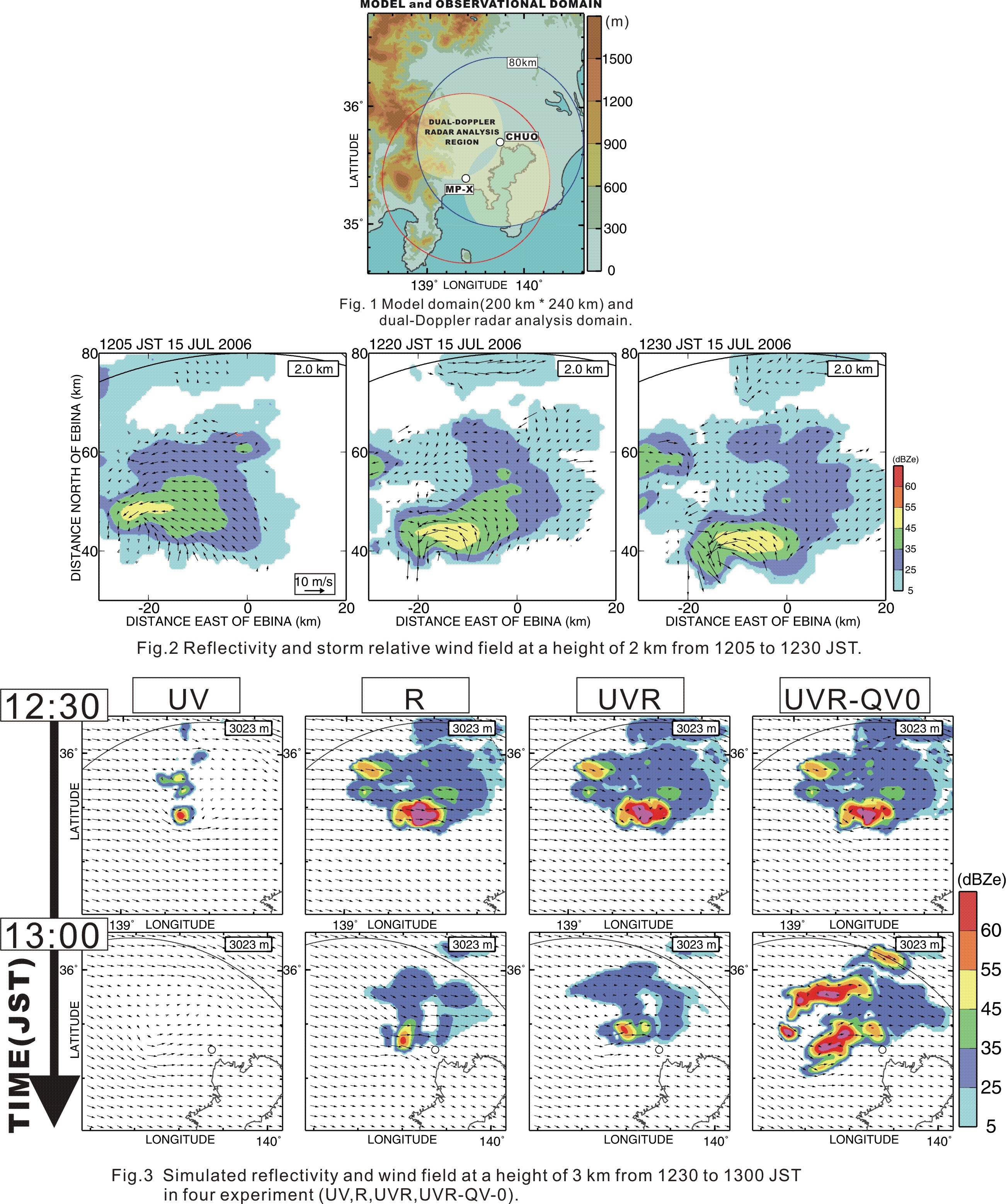