This paper presents a numerical technique for short-term aviation climate forecast. The forecast period covers 30 days from the initial time; the main frame of the forecast system is composed of a fine-grid regional climate model (RCM) and coarse-grid global circulation model (GCM)(Fig 1). Besides the conventional nesting techniques, the present system also involves some new approaches to raise the prediction accuracy, which include the weekly SST updating, the latest LULC fed from the satellite observation, downscaling interpretation to the interesting routes or flight zones, as well as the integrating technique with the popular statistical models.

The GCM used in the system is known as T63L16 that is used as the operational model by National Climate Center of China while the RCM is a modified version of the meso-scale model MM5(V3). The 30-day short-term prediction products includes the main weather procedures that might affect the aviation activities within the 30-day forecast period, the average, maximum, and minimum temperature, and precipitation of each 10-day period.

The system was run since July 1, 2001 and has performed very well. The system validation was carried on according to the four critical parameters that are commonly used in short-term climate validations; these are prediction score (P), climate skill-scores of forecast (SS1), random skill-scores of forecast (SS2) and the abnormal correlation coefficient (ACC) with respect to monthly averaged temperature, precipitation as well as 500hpa potential heights at each grid within the domain of RCM that covers an area of 14.1°ã-- 49.6°ãN, 84.6°ã --140.5°ãE. The preliminary results are listed in Table 1 in comparison with the operational forecasts issued by National Climate Center of China during a period from 1971 to 1995, we satisfy with the significant accuracy improvement. References

3.         Monin A S and LI Piterbarg , Forecasting weather and climate. in Limits of Predictability Yurii A Kravtsov(Ed), Springer-Verlag, Berlin Heidelberg,1993:7-44. 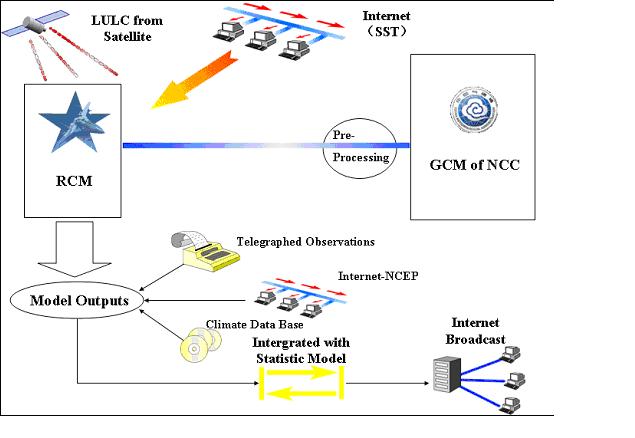