In order to compute the radiative effects due to atmospheric aerosol particles, their single-scattering properties are needed. For non-spherical, inhomogeneous particles such as mineral dust, solving these properties accurately can be extremely challenging. For particles clearly larger than the wavelength, the computation of these properties require considerable simplifications to the characteristics of the model particles, the physics in the computational method, or both.

In a recent paper[1] light scattering by single, inhomogeneous dust particles was simulated using the discrete-dipole approximation, based on shapes and compositions derived directly from measurements of real particles. The components of the scattering matrix as a function of the scattering angle were calculated for size parameters from 0.5 to 16. Computational cost makes it infeasible to use the approach directly to size parameters much larger than that. Instead of resorting to simplifications to deal with larger particle size parameters, we propose an alternative method based on extrapolation, which may prove to be preferable at least in some cases. A simple extrapolation scheme is described, providing a reasonable solution to extending the range of available values. Within the scope of this abstract, we restrict ourselves to discussing the scheme for component of the matrix.

A stable extrapolation can only be obtained if the asymptotic behavior of a function is known. Ignoring the extinction effect, the relation holds for large . However, while the behavior of for side scattering angles can to a reasonable degree be separated as , the prominent back- and forward-scattering peaks only become asymptotically separated in a different set of coordinates, as , necessitating the separate modeling of the peaks.

Here, the extrapolating size parameter functions for all features were defined as parametrizable hyperbolic curves with the property as . The asymptotic shape of and the parameters of for the side-scattering model were represented by spline curves. The back- and forward-scattering peaks were modeled with a series of generalized sinc functions, as where is a scale parameter. The parameters of this model were determined by fitting it to simulated values for size parameters between 10 and 16. This allows the evaluation of for arbitrary values of and as shown in Fig. 1. Since the approach is stable, an error estimate can be derived by comparing the model directly to simulated values.

A similar approach of identifying the features and modeling them separately applies to other components of the scattering matrix, as well. Furthermore, it is possible to take into account theoretical values for the limit, essentially turning the extrapolation into interpolation. 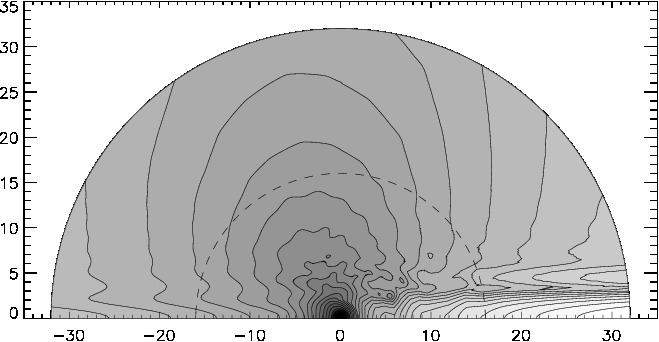