Atmospheric quantities such as cloud lifetime and precipitation rate that are predicted in atmospheric models are a function of ice particles’ fall speed which in turn depends on their mass and size. In order to compare models’ outputs or parameterize the ice phase when detailed modules are not implemented, modelers rely on in-situ observations. The microphysical properties of ice particles are also relevant to the aviation industry: aircraft may be exposed to severe icing conditions when flying through high ice water content areas formed by a large concentration of ice particles. Here again size and mass are especially determinant in developing icing detection and de-icing protection systems. For this latter reason, the HAIC-HIWC collaborative project (Dezitter et al. 2013, Strapp et al. 2016a) started in 2012 with overarching goals to document high ice water content areas in Mesoscale Convective Systems (MCS), thereby collecting in situ data to characterize the microphysical properties of ice crystals.

The in situ data used in this study were measured on the Falcon F-20 research aircraft operated by SAFIRE, the French Facility for Airborne Research. In addition to the usual parameters (aircraft position, flight parameters and atmospheric state parameters), the aircraft instrumental payload includes state-of-the-art instrumentation for the characterization of cloud microphysical properties. A set of optical array probes, namely the 2D Stereo probe (2D-S, Lawson et al. 2006) and the Precipitation Imaging Probe (PIP, Baumgardner et al. 2011) provide 2D projected images of individual ice crystals and the Isokinetic Evaporator Probe (IKP, Davison et al. 2009; Strapp et al. 2016b) measures the total water content. Particle Size Distribution (PSD) spanning 10 µm to 1.28 cm are derived from the imaging probe data for every 5 second of flight (distance of roughly 1 km at aircraft speed) as documented in Leroy et al. 2016 (with minor modifications). The bin-resolved masses of ice particles are retrieved from Particle Size Distribution (PSD) and Ice Water Content (IWC) using a new retrieval method (Coutris et al. 2017). In contrast with most of the retrieval methods published for the last decades, where a simplifying assumption is used to constrain the mass-size relationship to be a power law, this method relies on an inverse problem formulation that waives the power law constraint.

The study presents bin-resolved masses retrieved for various populations of ice particles observed during 17 flights of the Darwin 2014 campaign, in both continental and maritime MCS anvils at temperatures varying from -50 to -30 °C mainly. The results suggest that mass may vary with size in a quite irregular manner over the entire size spectrum, with marked variations from one size subinterval to another that cannot be produced from a m(D) power law assumption. A comparison between the masses calculated from the inverse-problem approach and those calculated from the power-law assumption will be presented in order to highlight the contrasting results produced with both methods. The observed variations of mass with size will be discussed in light of the geometric properties of respective OAP images, such as bin averaged fractal dimension. Particle images (2D) will be discussed in order to corroborate the above findings. Statistics on derived quantities, such as the bin-resolved apparent density (defined as the mass of the observed particle divided by the volume of a sphere of equivalent diameter) or the Median Mass Diameter will be presented. Finally, the current limitations arising from the retrieval method and uncertainties of measured PSD and IWC used as input for the calculation of ice particles’ mass will be discussed. 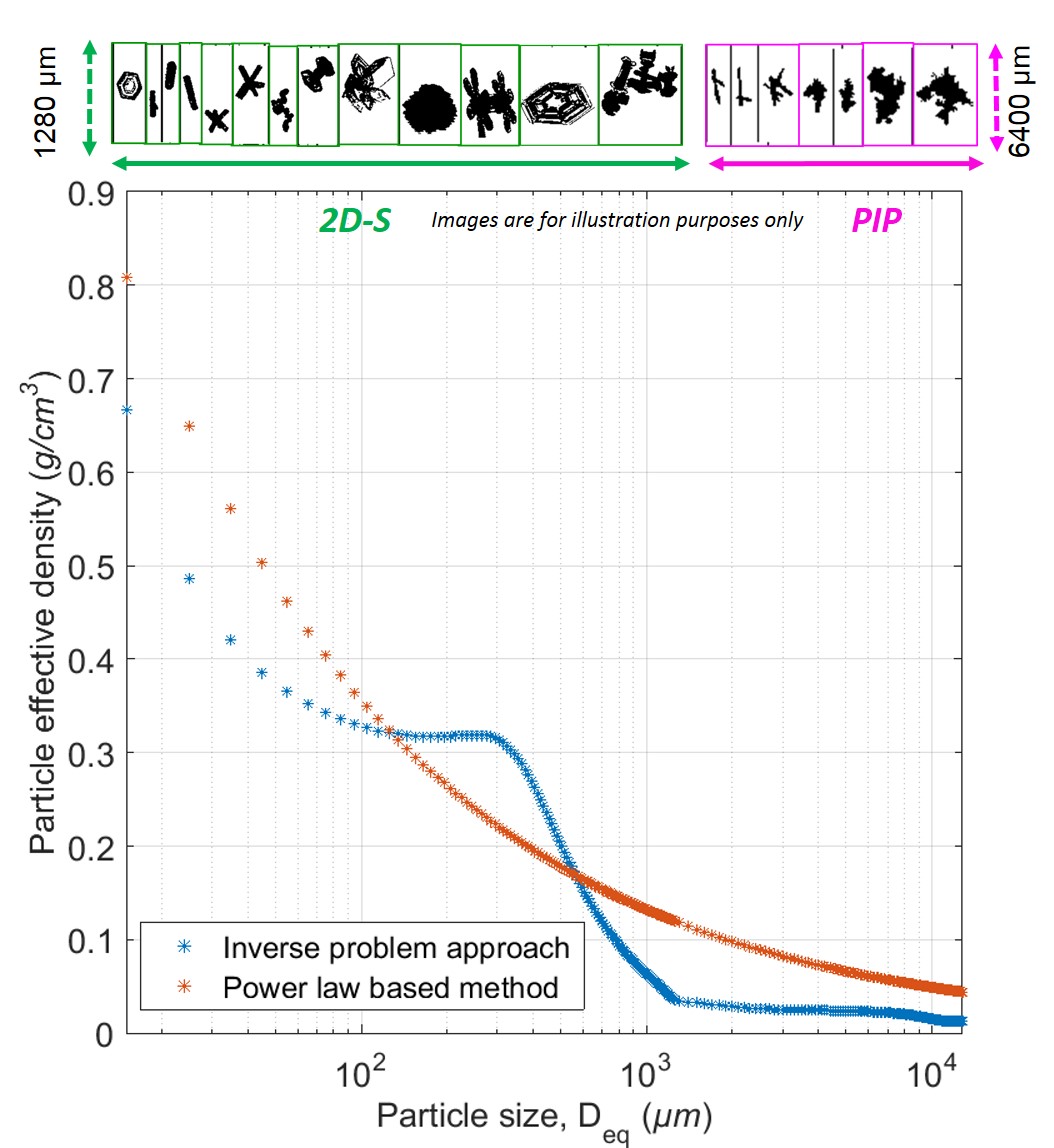