Mesoscale Convective Systems (MCS) are characterized by large spatiotemporal variabilities of cloud dynamics, thermodynamics, and microphysical processes governing ice crystals’ nucleation, growth, and precipitation. These clouds are particularly well suited for investigating the relation between microphysical processes and associated dynamic and thermodynamic conditions, even if those are complex. Tropical MCSs have been extensively sampled with state-of-the-art instrumentation during the HAIC-HIWC collaborative project (Dezitter et al. 2013, Strapp et al. 2016) since they contain high ice water content areas where sustained icing conditions put commercial aviation at risk. This makes the HAIC-HIWC dataset an ideal playground for studying microphysical properties of ice particles in tropical convection, thus enabling the opportunity to investigate potential relations between microphysics and dynamics.

This study utilizes satellite data and in situ measurements collected during the Darwin field campaign in 2014 in both continental and maritime MCSs at temperatures varying from -50 to -30 °C mainly. Satellite data and derived products, such as enhanced IR images and the detection of overshooting cloud tops (Bedka and Khlopenkov 2016), help in contextualizing the measurements thereby illustrating mesoscale evolutions of the cloud system during the sampling period and providing information on the dynamics along the flight path. The in situ observations supporting this analysis were performed with the Falcon F-20 research aircraft operated by SAFIRE, the French Facility for Airborne Research. In addition to the usual parameters (aircraft position, flight parameters and atmospheric state parameters), the aircraft instrumental payload included a set of optical array probes, namely the 2D Stereo probe (2D-S, Lawson et al. 2006) and the Precipitation Imaging Probe (PIP, Baumgardner et al. 2011), and a 95 GHz cloud research radar (RASTA, Bouniol et al. 2008). Some of these measurements are presented in the enclosed figure.

Composite size distributions are derived for every 5 seconds of flight (~1 km at aircraft speed), from 2D projected images of individual ice particles (Leroy et al. 2016). Given the diversity of observed number particle size distribution (PSD) pattern, the parameterizations published in literature, where number PSD are approximated by exponential or gamma distributions, would not fit well our data. Superposition of two to four log-normal distributions would satisfactorily approximate the PSDs from a mathematical point of view but would have a questionable physical meaning most of the time. In this study, we define a series of local descriptors which characterize the various PSD within subintervals rather than over the entire PSD size range. Among others, we calculate the position of the mode in the upper pristine range (see PSD type “D” in the figure), then the slopes over four segments ([15 – 75], [95 – 200], [450 – 750] and [900 to 2000], in µm) where spectra are fitted within respective subintervals with a power law, and finally a parameter characterizing the presence of large ice particles (larger than 1300 µm) based on the ratio of cumulated 2D areas calculated on two different size ranges. Results include statistics of these descriptors established on more than 10,000 data points gathered during the 17 research flights of the Darwin campaign. Theoretical considerations involving the different microphysical processes occurring in MCSs will be explored in order to explain the observed variability in PSDs.

The on-board cloud Doppler radar measures radar reflectivity and retrieves the 3D wind velocity field along the flight path. In order to characterize the dynamics in the cloud parcel where microphysical measurements were performed simultaneously, a proxy for the convective activity is calculated from the vertical air velocity retrieved in a column from 2 km below to 2 km above the aircraft. Correlations between this proxy for convective strength and parameters characterizing the PSD variability will be presented in order to support theoretical considerations relating dynamics and microphysics in different areas (stratiform versus convective for instance) of the clouds. 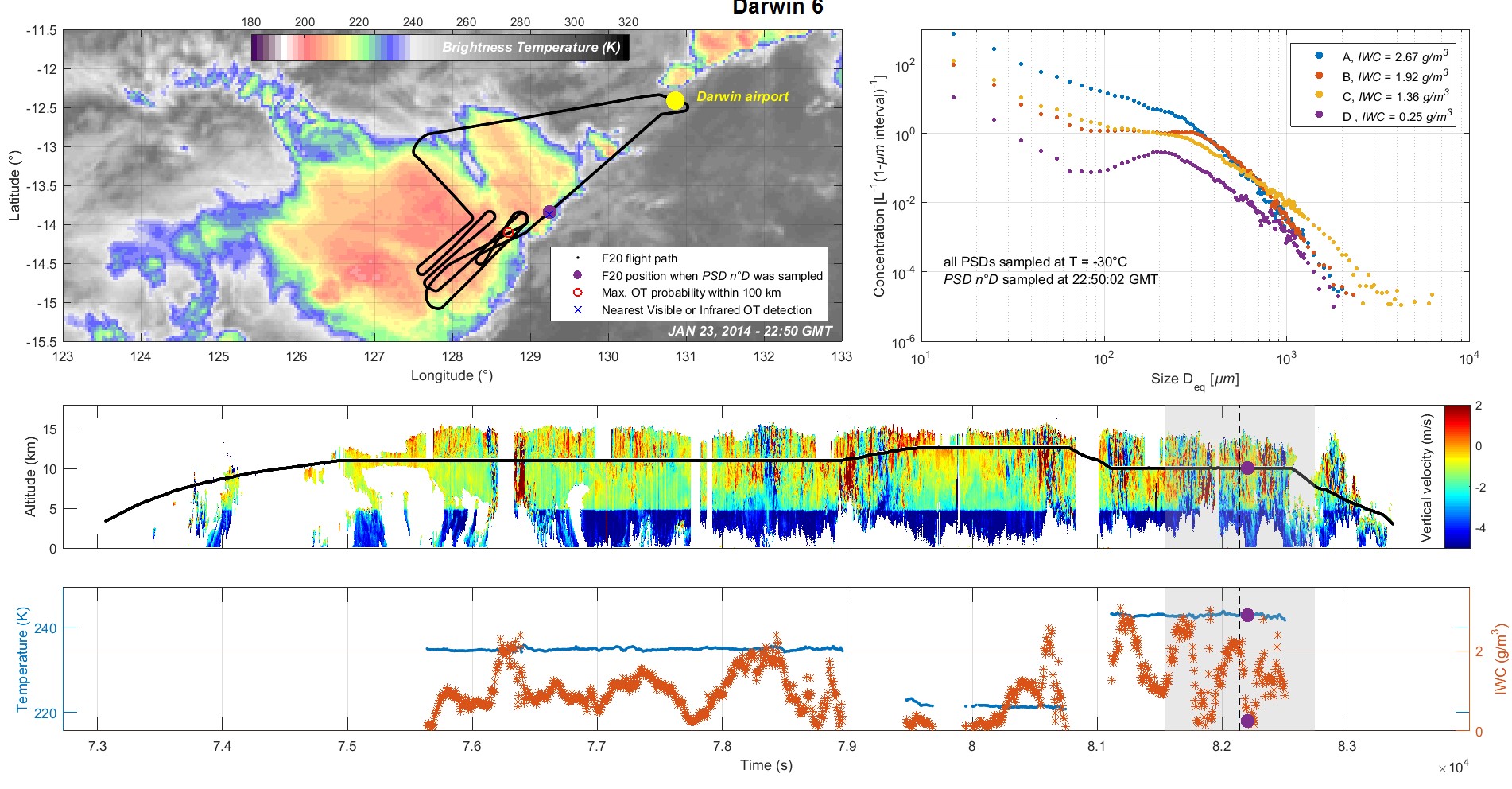