Aerosol particles affect the cloud microstructure through their ability to nucleate droplets or ice crystals. They are also involved in complex processes and in many feedbacks impacting both the cloud physics and the cloud dynamics. Thus, the LIMA (Liquid Ice Multiple Aerosols, Vié et al. 2016) scheme aims at representing at best the diversity of aerosol particles and their different properties regarding the nucleation and cloud system interactions at convective scale.

The performance of LIMA is assessed in comparison to the 1-moment ICE3 (Pinty and Jabouille, 1998) scheme, which is used daily since 2008 in the operational french mesoscale numerical weather prediction model AROME (Seity et al., 2011), for heavy precipitation cases observed during the HyMeX campaign (Ducrocq et al. 2014). During this campaign, an extensive observation network was dedicated to the study of mesoscale convective systems (MCSs) occurring over the western Mediterranean Sea. Detailed microphysical observations included both ground-based instruments (such as disdrometers, Micro Rain Radars and polarimetric radars) and airborne measurements (such as in-situ observations of hydrometeor size distribution and remote sensing from the RASTA cloud radar, Delanoë et al. 2013).

The evaluation of LIMA is first carried out on two specific, well documented events from the campaign. The variety of available observations provides valuable insight on the behaviour of the 2-moment scheme. Although the rainfall accumulation simulated using the ICE3 and LIMA schemes for both events was quite similar, the cloud composition showed notable differences.

Polarimetric radar and disdrometer observations showed that the 2-moment scheme LIMA produces more realistic rain mixing ratios, and better represents the observed variability of rain characteristics, which is expected from a 2-moment scheme. The attached picture shows the differential reflectivity as a function of the horizontal reflectivity in rainy areas for the 24th of September 2012. LIMA is in better agreement with the observations and has a better inter-quartile range range than ICE3. This figure also shows that LIMA produces too large rain drops in heavy precipitating areas.

The comparison to observations (both polarimetric radars, RASTA, and in-situ probes) also shows that the cloud representation is improved in LIMA in both convective areas and at the cloud top, and better represents the transition in the melting layer.

Complementarily, a detailed statistical study of particle size distributions (PSDs) observed during the whole extended observation period (2 months, September to October 2012) was led to help identify shortcomings of LIMA and constrain its representation. In-situ PSDs of icy hydrometeors on-board the F20 aircraft are used to assess the representation of snow and graupel in the scheme. A robust analysis of disdrometer observations showed that, while the extended gamma PSD used in LIMA is acceptable, using a diagnostic µ parameter varying with the mean volume diameter of rain drops could improve the rain representation. 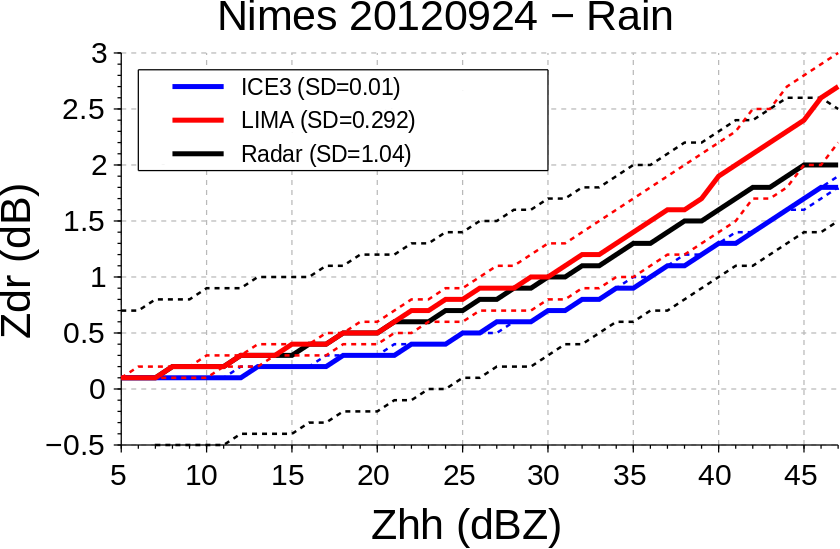