The American Meteorological Society defines a backdoor cold front as, A cold front that leads a cold air mass toward the south and southwest along the Atlantic seaboard of the United States., (AMS, 2012).

On March 14, 2012, cold air moved into New England from the east, dropping temperatures by 10  20 oF over a three to six hour period.  Figure 1 shows the surface observations from 1900 UTC, on 14 March 2012.  Notice the contrast between the temperatures in central Massachusetts and those nearer the coast.  The temperature of 61 oF  in south central Massachusetts dropped to 41 oF in the next four hours. The movement of this cold air was identified and forecast as a backdoor cold front by the National Weather Service in Taunton, MA up to 48 hours in advance,  which is not typical for such fronts.

Observations suggest that prior to the frontal passage, this front had a typical synoptic scale organization, with a ridge over the Northeastern United States, and a short wave trough at both 500 hPa and 850 hPa southeast of Hudson Bay.  According to Bosart et al. (1973), at the time of frontal passage, the short wave typically would move offshore into the Atlantic, but in this case the short wave intensified, and remained much closer to the coast at the time of frontal passage.  The shortwave initiated a small surface low pressure center just east of Massachusetts, and the cyclonic flow around this low brought cold air from the Gulf of Maine into New England.

In addition to the atypical upper-level short wave pattern, the cold air that moved into New England was much deeper than is normally found in a backdoor cold front.  By contrast, unpublished research into a backdoor cold front on June 11, 2002, showed that the cold air behind the front was no deeper than 1 km, well below the 850 hPa level.  In the present case, cold air advection was observed as high as 700 hPa.

We will present the mesoscale details of this cold front, using surface and upper air observations, Rapid Update Cycle (RUC) analyses, and high-resolution modeling.  The Advanced Research version of the Weather Research and Forecasting Model (ARW) will be used model this case, using four interactive nests at 27 km, 9 km, 3 km, and 1 km to capture the structure and evolution of the cold front.  In particular, we will look carefully at the depth of the cold air, and the mechanisms that contributed to the movement of the cold air.  Experiments with the ARW will include removal of the Appalachian Mountains, which, according to Bosart et al. (1973) often play a role in the movement of backdoor cold fronts. 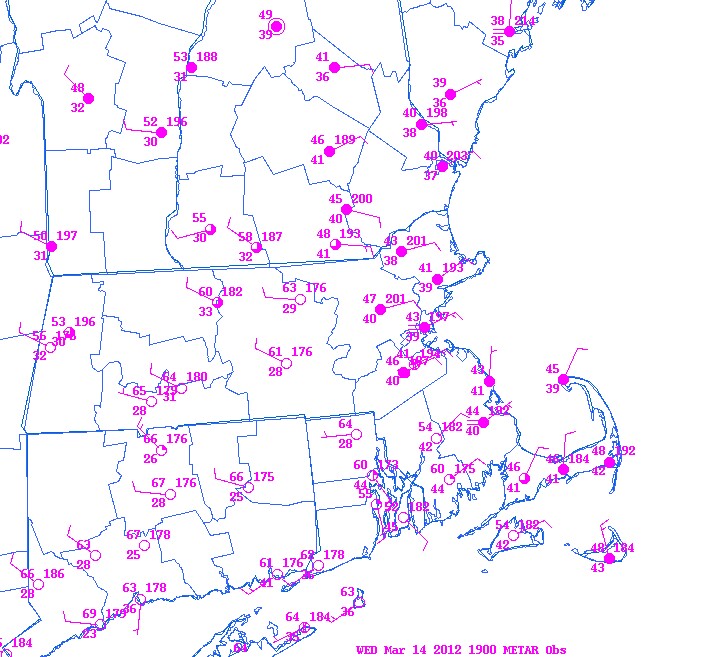 Figure 1.  Surface metar observations for 1900 UTC, 14 March 2012.  Plotting convention is standard with temperature ( oF) to upper left, dewpoint (oF) to lower left, wind barb (speed in knots), cloud cover shaded in station circle, and standard weather symbol, if any reported, directly to the left of the station circle.