5.3 The Dynamical Connection between Hydraulic Control and Wave Radiation Aloft in Stratified Airflow over Mountain Ridges

The dynamical connection between hydraulic control and wave radiation aloft is investigated theoretically and numerically in the idealized setting of two-dimensional stratified flow over an isolated ridge. The study is motivated by observations (Armi, L.. & Mayr , G. J. 2015 Virtual and real topography for flows across mountain ranges. J. Appl.
Meteorol. Climatol) of 'virtual topography' effects in flow over the Sierra Nevada. We consider a constant far upstream airflow with uniform stratification except for a sharp inversion layer (i.e. density interface) located above the height of the ridge crest. Below this layer, the stratification is sufficiently strong that upstream blocking occurs and a hydraulically controlled flow spills over the crest. In the inviscid limit, a bifurcating streamline separates the hydraulically controlled overflow from the wave field aloft. We show that, depending on the height of the inversion layer, it can either remain approximately flat, above the controlled downslope flow, or plunge in the lee of the obstacle as part of the controlled overflow itself. Whether the inversion layer plunges or not is a direct consequence of hydraulic control at the crest. The airflow aloft responds to the top of the sharp inversion layer as if it were a virtual topography. Vertical propagation and hence energy fluxes are strongly suppressed when the inversion layer remains flat. By contrast, a plunging inversion layer can excite a wave field aloft that is approximately six times as energetic, with 15% higher form drag, compared to when the interface remains flat. 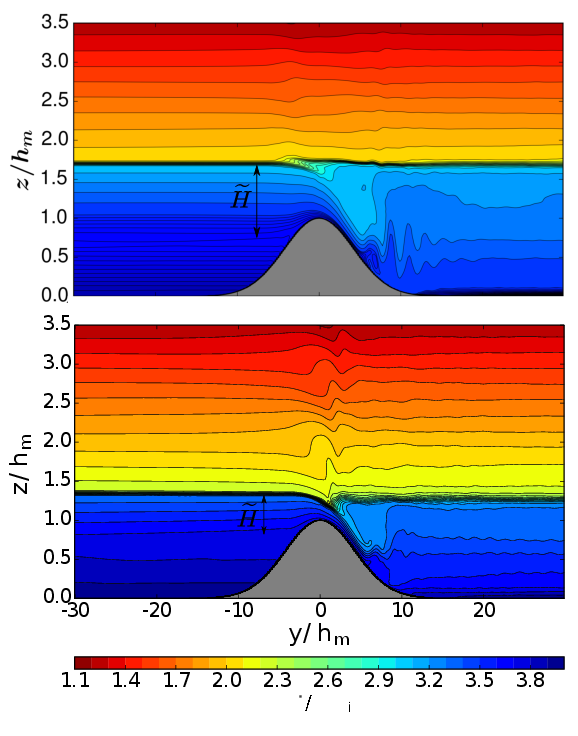