More
256 (Boston Convention and Exhibition Center)
Eric P. Grimit, Vaisala, Inc., Seattle, WA
The primary goal of the Second Wind Forecast Improvement Project (WFIP2) was to make significant advancements to wind forecasting accuracy in regions of complex terrain. Via a collaborative observational field campaign conducted in the Columbia River Basin and physics improvements implemented in NOAA’s High-Resolution Rapid Refresh (HRRR) model, measurable skill increases were achieved for some of the common failure modes of mesoscale NWP modeling systems in areas of complex orographic flows. In a direct application of these modeling improvements to the wind energy industry, prototype decision support tools were developed to target complex terrain weather phenomena observed during the field campaign. This paper examines the secondary value chain aspects of WFIP2 by investigating the potential impact on private sector decision-making as a result of the modeling improvements. As an example of the approach, an algorithm is developed that can produce alerts for the potential occurrence of a significant up-ramp in wind power output due to the erosion of long-lived cold pools. As designed, the method produces alerts that are fully probabilistic and so validation metrics are chosen to assess the calibration and skill of such guidance. We illustrate the concept with a prototype visualization interface and summarize industry feedback from WFIP2 project partners. The extension of the idea toward other complex flows observed during the study and of high impact to the industry is also discussed.

The initial results show that probabilistic forecasts for these special events have quite limited skill. The average precision score is only about 5-6%, while for generic up-ramp and down-ramp events it can reach moderate values around ten times larger (50-60%). At the optimal decision-making threshold, we observe low equitable threat scores near 3% because even though probabilities of detection are above 70%, the false alarm ratios are even larger (above 90%). Only within a narrow range of critical thresholds (the 0.5-7.5% interval) can the forecast be used to economic advantage, where value scores reach up to a level of 40-45%, but drop off quickly on either side of this peak. This means that for cost-loss ratios less than 0.5%, a decision maker should always choose to protect against the event happening, despite its rare nature. For cost-loss ratios greater than 7.5%, a decision maker should never choose to protect against the event happening since losses aren’t too expensive compared to the cost of protection. Because of the relatively infrequent nature of the example event type and the small sample size of observed events during the four-month reforecast period available in this study, it’s likely these results are too pessimistic and can be improved with the use of the full year-long historical WFIP2 reforecast data set that is now available.

Figure: Value score curves as a function of the cost-loss ratio for the WFIP2 control and experimental HRRRNEST (∆x = 750 m) classifier model forecasts of the Bonneville Power Administration (BPA) fleet aggregated power up-ramp events associated with cold-pool mix-outs, zoomed in to the cost-loss ratio range between 0 and 0.1. 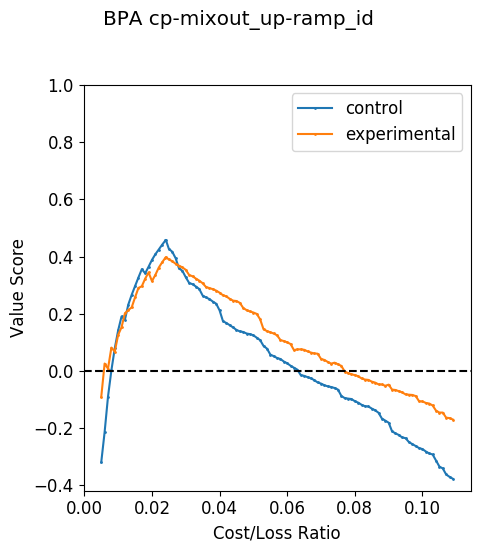