1A.4 Can thermodynamic intensification of the global Walker Circulation help resolve the East African climate paradox?

More
156BC (Boston Convention and Exhibition Center)
Chris C. Funk, USGS EROS, Santa Barbara, CA; and A. Fink
In the spring of 2019, the East African boreal spring March-May “long” rains failed again contributing to a massive increase in the number of displaced people and extreme food insecurity, especially in Somalia, eastern Ethiopia, and eastern Kenya. UC Santa Barbara/US Geological Survey scientists first identified declining east African rains in the mid-2000s, and ,unfortunately, suppressed rainfall levels have continued into the 21st century. A combination of gauge-only Centennial Trends and satellite-gauge Climate Hazards center InfraRed Precipitation with Stations (CHIRPS) data can be used to assess long term changes in seasonal precipitation. Since 1999, there have only been a few wet seasons: the very wet 2018, and 2010, and 2013. Conversely, 9 years had poor rainfall: 1999, 2000, 2001, 2004, 2008, 2009, 2011, 2017, and 2019. This means that the “new normal” in eastern East Africa has been a substantial or severe March-to-May drought about every other year. Such sequential rainfall deficits have had dangerous impacts, eroding resilience, economic reserves, and herd size and health.

While prior research by numerous scientists has linked these rainfall declines to various aspects of an enhanced global Walker Circulation, which tends to be associated with subsidence and dry conditions over East Africa, the relationship between the observed Walker Circulation enhancement and climate change remains contentious. Two related factors that suggest that the observed enhancement is due to natural internal variability is that a) most climate change models indicate a weakening of the Walker Circulation, while b) large-scale atmospheric energy balance considerations indicate relatively small changes in mean tropical precipitation, due to the fact that, on average, fluctuations in hydrologic balance (P-E) need to be offset by changes in radiative forcing. The latter are relatively small, as are global trends in mean precipitation.

Using reanalysis fields from version 2 of the Modern Era ReAnalysis (MERRA-2), we explore a new way of thinking about the energetics of the Walker Circulation. By far, the two largest energy components of a column of air are associated with the column’s enthalpy or internal energy, which is a function of temperature, and the column’s potential energy, which is a function of geopotential height. These two terms are commonly combined in a measure known as dry static energy (DSE). This combination can mask important and interesting behavior. For example, on a grid-cell by grid-cell basis, the divergence of internal and potential energy are highly anti-correlated, with a median anti-correlation of -0.97 based on 1980-2019 March-May MERRA-2 data. This anti-correlation arises through the hydrostatic relationship, which tightly couples changes in air temperatures and geopotential height. The diabatic forcing term is a function of radiation, precipitation, and sensible heating. Diabatic forcing and internal energy convergence are positively correlated in space and time, and in general, changes in diabatic forcing and internal energy convergence are offset by changes in potential energy divergence. This global pattern is clearly associated with regions of internal energy convergence and diabatic heating near the Warm Pool, Amazon/tropical Atlantic, and Gulf of Guinea/tropical Africa. These regions also typically export more than 400 Wm-2 of geopotential height energy. Conversely, the sub-tropical high regions of the globe are associated with strong temperature divergence and geopotential height convergence.

While changes in DSE are constrained by changes in radiation, the exchange between internal and potential energy is not. It is therefore possible that the Walker Circulation may become more intense as 1) increased atmospheric air temperatures increase patterns of tropical temperature convergence, and 2) diabatic forcing increases in areas associated with water vapor increases due to precipitation and the trapping of long wave radiation. Preliminary analyses of changes in MERRA-2 atmospheric energy balance terms (Figure 1), and conditions during recent East African drought years (not shown), suggest that this may be the case, at least over the Indo-Pacific warm pool and tropical Atlantic regions. These areas of enhanced temperature convergence/diabatic forcing appear alongside an area of reduced temperature convergence/diabatic forcing over tropical Africa.

This talk will explore these variations, and co-variations, and their potential relationship to droughts in East Africa. Multiple data sets are also used to provide convergence of evidence. 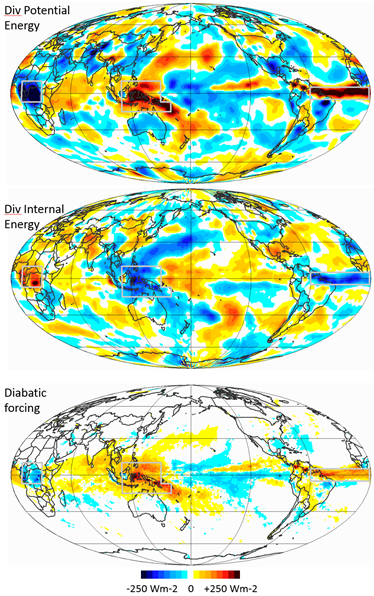