More
Peter L. Ward, U.S. Geological Survey (Retired), Jackson, WY
The thermal and chemical structure of the middle atmosphere is determined by molecules of air absorbing high-energy, solar, ultraviolet radiation. The dominant photochemical reaction for forming the stratosphere is dissociation of a molecule of oxygen into two atoms of oxygen. When a molecule is dissociated, the two pieces fly apart at high velocity. Temperature of air is directly proportional to the average velocity of all its molecules and atoms squared. Thus, photochemical dissociation converts bond energy efficiently and completely into air temperature.

A molecule of oxygen is dissociated by absorbing ultraviolet-C radiation with frequencies around 1237 terahertz, energies around 5.1 electronvolts. Since oxygen makes up 20.95% of Earth’s atmosphere, there is ample oxygen to absorb all solar ultraviolet-C of appropriate frequencies that reaches the stratosphere, keeping the stratopause 30 to 40 oC warmer than the tropopause. Thus, the stratosphere forms an “electric” blanket warming Earth—electric in the sense that the thermal energy comes from a distant source, Sun, not from the body under the blanket, Earth.

The second most important photochemical reaction in the stratosphere is dissociation of ozone by ultraviolet-B radiation with frequencies around 967 terahertz, energies around 4.0 electronvolts. While ozone concentrations, even in the ozone layer, are less than 10 parts per million, ozone is continually being formed and dissociated in the endless ozone-oxygen cycle, absorbing most solar ultraviolet-B radiation. When atoms of chlorine reach the lower stratosphere especially in winter, ozone concentrations that normally increase in winter can be depleted. One atom of chlorine, under the right conditions, can destroy 100,000 molecules of ozone. Depletion of the ozone layer allows more ultraviolet-B radiation than normal to reach Earth. Ultraviolet-B radiation is observed to cause sunburn, cataracts, skin cancer and mutations. It also dissociates ground-level ozone pollution, warming air in populated regions and penetrates oceans more than one hundred meters, very efficiently increasing ocean heat content as observed.

In 1798, Sir Benjamin Thompson proposed the mechanical theory of heat generated by friction when boring canon. This mechanical theory evolved into two fundamental assumptions: 1) heat is a flux of thermal energy measured in watts per square meter and 2) the greater the amount of flux absorbed, the hotter the body will become. Note that this approach never addresses the issue of what heat or thermal energy are, physically. These two assumptions still dominate physics, thermodynamics, and atmospheric physics. They form the basis for greenhouse-warming theory. They were developed long before we understood the atomic and molecular structure of matter—long before we discovered that the bonds holding matter together are not rigid. We now understand in considerable detail that these bonds oscillate at trillions of cycles per second—the hotter the body, the higher the amplitudes of oscillation and the higher the dominant frequencies of oscillation. We also now understand that heat flux is proportional to temperature difference.

Heat is what a body of matter must absorb to increase its temperature and lose to decrease its temperature. The physical properties of heat Earth must absorb to increase its temperature to 3000 oC are described by the yellow-shaded area in the lower figure. Heat is the result of a broad continuum of frequencies of oscillation of all the bonds holding matter together and is proportional to the difference in temperature between the emitter and the absorber. Heat is a broad continuum of values that cannot be described by some single number of watts per square meter as is currently done. In his original formulation, Planck was confused about intensity or amplitude of oscillation, putting energy on the y-axis even though he postulated that energy equals frequency times a constant on the x-axis as shown. Radiation only consists physically of frequencies and amplitudes of oscillation.

Today, most climate scientists are so convinced that global warming is caused by increases in greenhouse gas concentrations that they refuse to even consider the reality that greenhouse-warming theory is physically impossible as explained cogently at Physically-Impossible.com. This creates a crisis in climate science because they are urging world leaders to spend tens of trillions of dollars right now to reduce greenhouse-gas emissions. The details are explained at WhyClimateChanges.com. 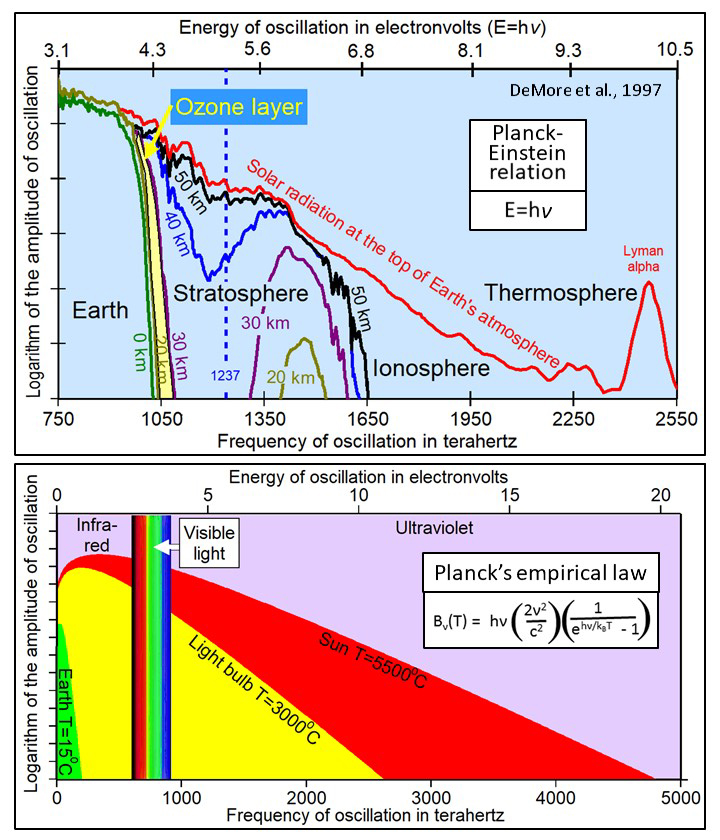