More
Salon A-E (Marriott Portland Downtown Waterfront)
Michael Haigh, Imperial College London, London, United Kingdom
Mesoscale eddies play a crucial role in driving the ocean circulation, but their turbulent nature means that general circulation models (GCMs) require horizontal grid resolutions on the order of 1 km in oder to dynamically resolve them. Such fine grid resolutions may at times be feasible for short-time integrations, but are unrealistic for climate-related studies which require integratations of coupled atmosphere-ocean models over centuries and millenia. To get around this issue, models of the atmosphere and/or ocean commonly use a parameterisation whose purpose is to accurately account for turbulent eddies and their effects on the large-scale flow.

The Gent and McWilliams closure (Gent and McWillliams, 1990) provides a popular basis for diffusive eddy parameterisations which make the defining assumption that turbulent eddies act as a diffuser of oceanic tracers. In many parts of the ocean the Gent and McWilliams closure, amongst other diffusive parameterisations, makes significant improvements to the performance of GCMs. For other oceanic flows, however, like the eastward jet extension of a western boundary current, the downsides of a duffusive parameterisation become apparent. Specifically, the sharp north-south potential vorticity gradient that charactersises an eastward jet is maintained by antidiffusive forces, effects unlikely to be parameterised accurately via the diffusive approach. Stochastic parameterisations sidestep this issue by allowing for both positive and negative eddy diffusivities, and this approach is rapidly becoming more popular.

Here we propose, and present the early stages of, an alternative approach which invokes methods most similar to some stochastic approaches. Berloff (2015, 2016) introduces this idea in the context of the quasi-geostrophic system, and defines a novel parameterisation method that successfully improves a non-eddy-resolving model so that it much more closely resembles an eddy-resolving reference solution.

The presentation will cover the early stages of this technique applied to the shallow water (SW) equations. The one- and two-layer systems, set up in a zonally periodic beta-plane channel, are externally forced by an elementary eddy-like forcing, and it is analysed how this acts to distribute potential vorticity (PV) in the system. The way in which PV is distributed is captured by the ‘footprint’, defined as the potential vorticity flux convergence. It is observed that the a typical footprint consists of a pool of positive/negative PV flux convergence to the north/south of the forcing location, a fact corroborated by plots of the footprint’s zonal average which has a large positive/negative peak to the north/south of the forcing location, and rapidly decays to zero in the far field.

Two essential parameters of the system are the meridional location of the forcing and the nature of the zonal background (BG) flow; the footprint dependence on these is systematically explored. In order to better quantify the meridional extent of the PV redistribution, we define the 'equivalent eddy flux' (EEF), a quantity calculated by taking the meridional integral of the footprint's zonal average at either side of the forcing, and multiplying by a normalised 'center of mass'. A positive EEF corresponds to a net northern flux of PV. As an example, for a uniform BG flow a test was ran to find out how the EEF depends on the latitude of the forcing. The EEF is positive for all forcing latitudes, with a minimum EEF for a centrally located forcing. We observe stronger EEFs for a forcing to the north and even stronger EEFs for a forcing located in the south. The attached image, produced by solving the 1-L SW equations for approximately 250 different forcing latitudes, contatins a plot of the EEF for 3 different forcing periods (negative x-axis=south, positive x-axis=north). Further results regarding the equivalent eddy fluxes' dependence on the BG flow and the forcing location will be presented, as well as future avenues for deriving an turbulent eddy parameterisation.

Overall, the PV flux convergence has a tractable dependence on properties of the BG flow, e.g. flow strength or jet sharpness, which is a promising property as we are concerned with eventually deriving a closed eddy parameterisation from the footprint. As well as this ultimate aim, our present understanding of the shallow water system is being, and will continue to be, greatly improved as this novel research into forced shallow water dynamics in an oceanic setting continues. 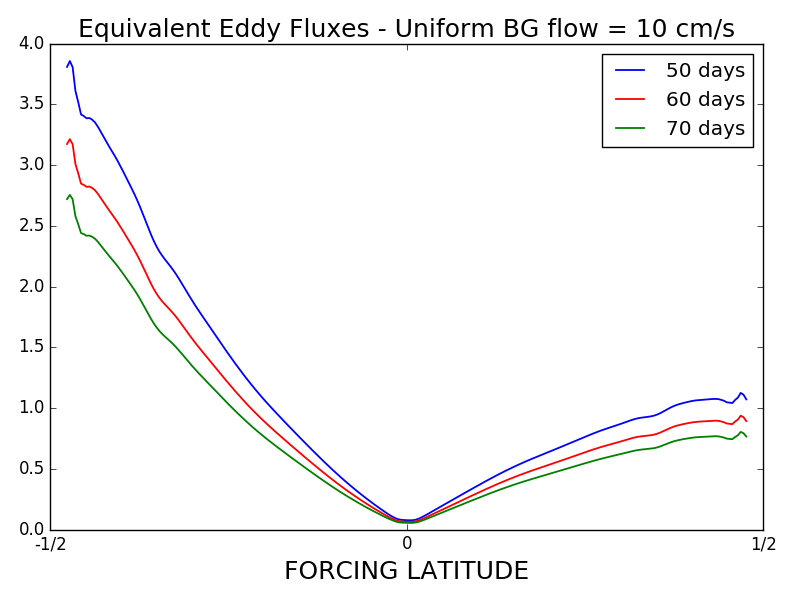