5A.1 Visualization of Tornado using Funnel and Debris Clouds

More
Pavilion Ballroom East (Hilton Portland )
Minoru Noda, Tokushima Univeresity, Tokushima, Japan; and M. Hachiya and F. Nagao
Manuscript (419.6 kB)
It is very important to investigate the characteristics of tornadoes to estimate tornadic damages to structures and human beings. The main method for rating the intensity of tornadoes is the use of the Enhanced Fujita Scale, which is very reasonable if the degree of damages is clearly indicated [1]. The Japanese Enhanced Fujita Scale was developed in April 2016 and has been in use in Japan for estimating wind speeds from damages ever since [2]. This scale includes some damage indices not available in the American Enhanced Fujita Scale, such as automatic vending machines, power transmission line poles, and asphalt of roads [3]. However, it is difficult to estimate the strength and scale of tornadoes if sufficient damages are not available for evaluation. Other methods that depend on damages involve direct observation, such as the VORTEX2 Project [4]. This is a very suitable method, but it is difficult to use this method in Japan because moving observation equipment quickly and safely is impossible. Therefore, we need other methods to estimate characteristics of tornadoes quickly and safely.

We came up with an idea to use images and movies uploaded to the Internet by the general pubric. Dergarabedian investigated the relationship between the maximum wind speed of tornadoes and shape of funnel clouds using a two-dimensional Rankine vortex in 1970 [5]. However, real tornadic vortices have three-dimensional structures. Therefore, the relationship between characteristics of tornadoes and their funnel clouds should be investigated considering three-dimensional tornadic flows.

In this study, three dimensional real-scale tornado-like vortices were produced using Large Eddy Simulation in OpenFOAM with very simple numerical grid and boundary conditions as shown in Figure 1 [6]. Moreover, funnel clouds for these flows were calculated assuming that only temperature change is adiabatic. In this manner, the relationships between characteristics of flows and shapes of their funnel clouds were investigated. Figure 2 shows an example of the simulated funnel clouds. Furthermore, debris clouds for these flows were obtained through three-dimensional motion simulation of debris. Figure 3 shows a snapshot of the simulated funnel and debris clouds. 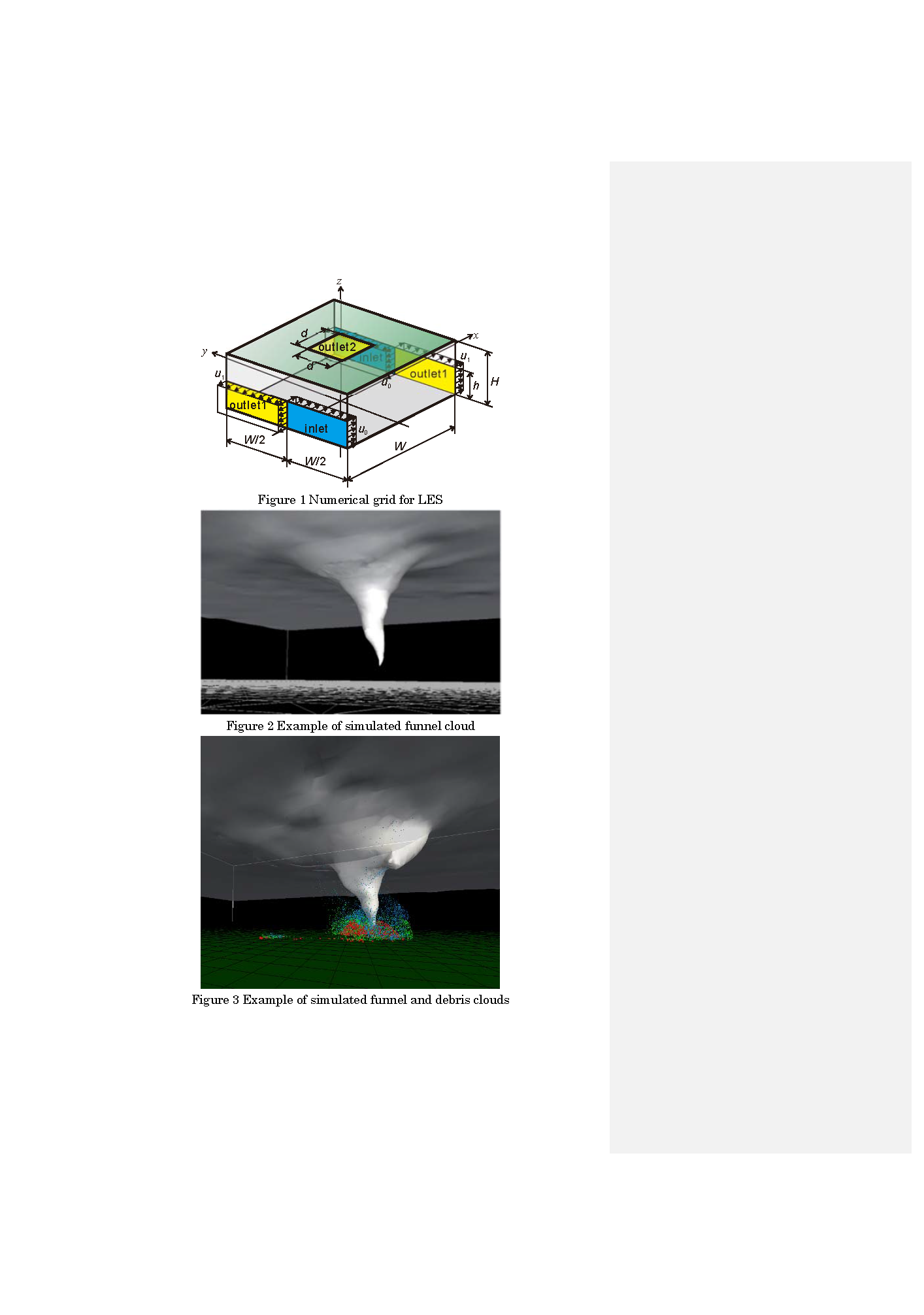