More
Pavilion Ballroom East (Hilton Portland )
Kevin R. Haghi, Univ. of Oklahoma, Norman, OK; and D. Parsons, A. Shapiro, B. Blake, and D. W. Reif
Recorded Presentation
This research seeks to establish a dynamical framework for organized nocturnal convection in environments with stable boundary layers and a nocturnal low-level jet (NLLJ).  Our research is motivated by the need to better understand and predict convection over the Great Plains of the United States where the maximum in precipitation occurs at night, often with storms that produce flash floods, high winds, and at times tornadoes. Our findings suggest that bores are often likely to be an inherent component of the nocturnal MCSs lifecycle, specifically in the Great Plains.  The evidence used in our analysis is based mainly on data collected during the IHOP_2002 Project.  Our key findings are as follows:

Bores were frequently observed to generate from nocturnal convective outflows. Our investigation began with a systematic analysis of IHOP_2002 data, much like Wilson and Roberts (2006) study of boundaries that initiate convection. This component of our study differs from Wilson and Roberts, since our study aims to characterize boundaries in the nocturnal environment through detailed surface observations.  Through our approach, we were able to observe and classify 152 radar fine lines. The statistics show an overwhelming majority of convectively-generated convective outflows acted as density currents that initiated bore-like responses in the nocturnal environment (90%).

The generation of bores by convective outflows is supported by theoretical parameters Fr and H.Given the environmental conditions and calculated density current properties, a statistical analysis of the expected flow-regimes demonstrated that an intrusion of observed density currents into the stable nocturnal boundary layer will likely generate a bore response. This signal strengthens through the night (Figure 1).

Theory and observations suggest that bores generated by convective outflows will be relatively long-lived with lifting that extends above the stable nocturnal boundary layer.Vertical profiles of the Scorer parameter were calculated using data from the 3-hourly soundings. These calculations reveal that from an inflection point in the winds above the nose of the NLLJ to a height of 1.5 or 2.5 km is largely negative for the Scorer parameter, which can trap wave energy.  The vertical/horizontal wavelengths expected by theory matched qualitatively well with the observed atmospheric bores using profiles of the vertical motion obtained from the MAPR profiler during IHOP_2002.  However, both the calculated and observed vertical motion profiles never seem to decay to zero as vertical motions extend deep into the troposphere (~5km).

The lifting by the bores is substantial with net vertical displacements approaching 1 km in the layers between ~ 1 and 3 km in height. The structure of atmospheric bores was investigated in 13 cases where bores moved over the MAPR profiler. The net and peak vertical displacements of layers of enhanced signal-to-noise in the MAPR reflectivity data was calculated from the time series of MAPR data. Net displacements of 1 and even 2 km were observed near and above the nose of the NLLJ.

The substantial ascent by bores occurs in vertical layers with high CAPE in association with advection of warm, moist air by the NLLJ.The role of the NLLJ in advecting potentially unstable air northward into the Great Plains area is well established. A diurnal composite of CAPE and CIN as a function of height constructed from 3-hourly soundings taken during IHOP_2002 confirmed this relationship, with a layer of elevated CAPE and modest CIN associated with advection by the low-level jet above the stable nocturnal boundary layer. Soundings in the post-bore environment support the role of bores in reducing the CIN within the inflow to nocturnal MCS events.

The potential for bores to play a role in maintaining nocturnal convection is supported by numerical simulations. This concept is explored in a WRF-ARW simulation of a nocturnal MCS that took place on June 4, 2013 where a stable layer wave response occurred near the leading edge of a convection system. The Scorer parameter and convective maintenance theory (Rotunno et al. 1988) explain the simulated three-dimensional structure for both the MCS and the wave.  Idealized simulations (e.g., French and Parker 2010) also support the possibility that bores can maintain nocturnal convection.

Although these conclusions are founded on a single field project, the mechanisms responsible for the presence of bores are inherent with the Great Plains summer nocturnal environment: a surface stable layer, a NLLJ and MCSs producing outflows.  We now have the evidence and inclusion of better data to challenge the view of Carbone et al. (2002) that downplayed the role of bores in the nocturnal environment. The potential favorable role of bores in maintaining MCS suggested by this study needs to be tested by subsequent modeling and observational investigations.  The data and modeling activities of Plains Elevated Convection at Night (PECAN) field project will be quite useful in this regard, given that PECAN is arguably the most detailed collection of observations of bores generated by and in the presence of convection. 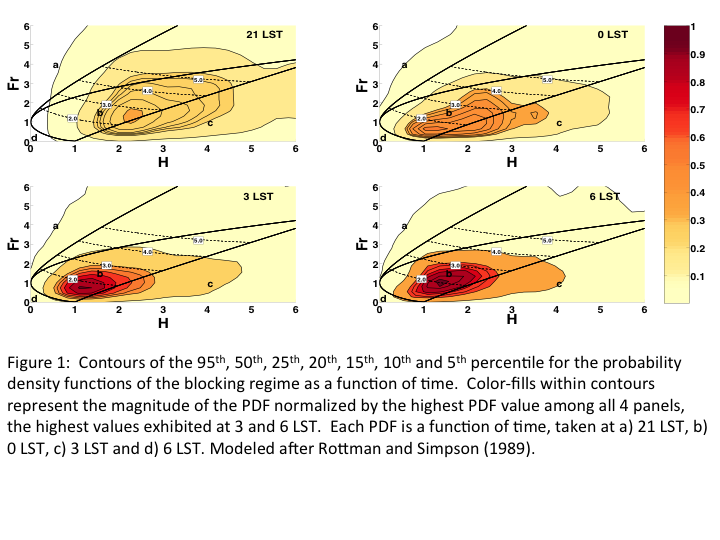