29 Asymmetric Convection Outside of the Eyewall: Role of Vertical Wind Shear, Vortex Tilt, and Frictional Convergence

More
Champions DEFGH (Sawgrass Marriott)
Michael Riemer, Johannes Gutenberg Univ., Mainz, Germany
It is well known that vertical shear of the environmental winds tends to tilt the tropical cyclone (TC) vortex and leads to distinct convective asymmetries. A distinct quasi-stationary asymmetry outside of the eyewall has been dubbed “stationary band complex” (SBC). The SBC has long been hypothesized to play an important role for changes in storm intensity. More recently, the role of the SBC as a precursor to secondary eyewall formation has been discussed.

Convective-scale processes within the SBC have received considerable attention following a major field campaign in 2005. In the current work, we focus on vortex-scale processes that may lead to favorable conditions for the formation of a SBC. Results of seminal work by Willoughby et al. (1984) indicate that SBCs form in storms that are embedded in environmental flow due to vertical wind shear. To reduce the inherent complexity, SBC formation is here examined in idealized numerical experiments of tropical cyclones in vertical shear. Consistent with a result of Willoughby et al., it is found that the SBC is located near the thermodynamic boundary between the TC’s “moist envelope” – high-θe air that encompasses the TC’s inner core – and the lower-θe environment.

A re-examination of the SBC formation suggests that the previously-proposed formation mechanism based on vorticity conservation needs to be revised. As one step towards a more complete understanding of SBC formation, a mechanism for the generation of a favorable, vortex-scale environment, in which the SBC then forms, is proposed. This mechanism comprises two fundamental effects of vertical wind shear on the tropical cyclone: vortex tilt and the distortion of the moist envelope. For tropical cyclones that are subject to an approximately uni-directional vertical shear, one can expect an azimuthal wavenumber-1 pattern of high-vorticity and high-θe values to the right of the shear vector extending to radii of 150 – 200 km. A simple boundary layer model indicates that frictional convergence due to this vorticity asymmetry outside of the eyewall provides forcing for vertical motion in the high-theta_e environment. This region outside of the eyewall is thus favorable for the initiation of deep moist convection. The radial shear of the swirling winds then promotes the organization of the convection into a banded structure. 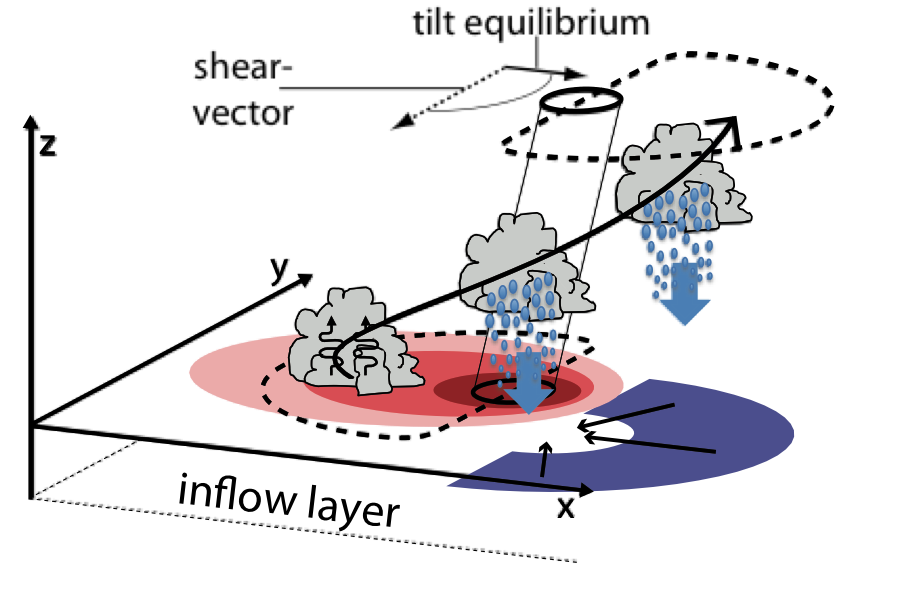