More
Champions DEFGH (Sawgrass Marriott)
Louis Rivoire, Colorado State Univ., Fort Collins, CO; and J. A. Knaff and T. Birner
The authors previously published an analysis of the upper-level thermal structure in tropical cyclones (TCs) using high vertical resolution temperature retrievals from the Constellation Observing System for Meteorology, Ionosphere and Climate (COSMIC). The analysis revealed the presence of air masses 2-3 K colder than the environment near the tropopause of intensifying TCs (before a tropospheric warm core is established). We refer to this signal as tropopause-level cooling (TLC). TLC was found to be strongest when cloud top temperatures were coldest, and to increase the lapse rate in the upper troposphere by almost 1 K/km –halfway towards the dry adiabat. This destabilizes the atmosphere to convection and we suggested it might allow existing convective elements to deepen, potentially participating in the convective intensification of TCs. The mechanisms for TLC are not well understood but may at least partially be associated with hydrostatic adjustment to the warm core.
A first step towards understanding the effects of TLC on TC structure and dynamics is to use a data set that includes all relevant meteorological variables and a global, continuous coverage. Reanalysis data sets are well suited for this and we propose to use the European Reanalysis Interim (ERAi) and the Modern-Era Retrospective analysis for Research and Applications, Version 2 (MERRA2). ERAi and MERRA2 were chosen because they have contrasted skills in representing TCs. While reanalyses have known deficiencies in producing realistic horizontal TC structures, preliminary analysis of ERAi and MERRA2 with their native resolution reveals that they capture the average vertical thermal structure in TCs reasonably well (see Figure). We analyze the structure and behavior of TLC in both reanalyses, including the response to vertical wind shear, the relationship with the magnitude of the warm core, the inter-annual variability. We discuss our results in light of the impacts of TLC on TC structure and dynamics.
Figure caption: Average temperature anomaly inside 2007-2014 category 1-5 tropical cyclones (322 from all basins). Anomalies are calculated as the difference between the average profile within 600 km of TCs ("inner core" profile) and the average profile between 1300-1500 km (environmental profile). The horizontal error bars show 1 STD from the mean at the location of the largest anomalies in COSMIC. "COSMIC atmPrf" refers to the retrievals that are independent from the water content (good approximation above ~10 km), and "COSMIC wetPrf" refers to the retrievals that are dependent on the water content (coarse estimates under ~10 km). 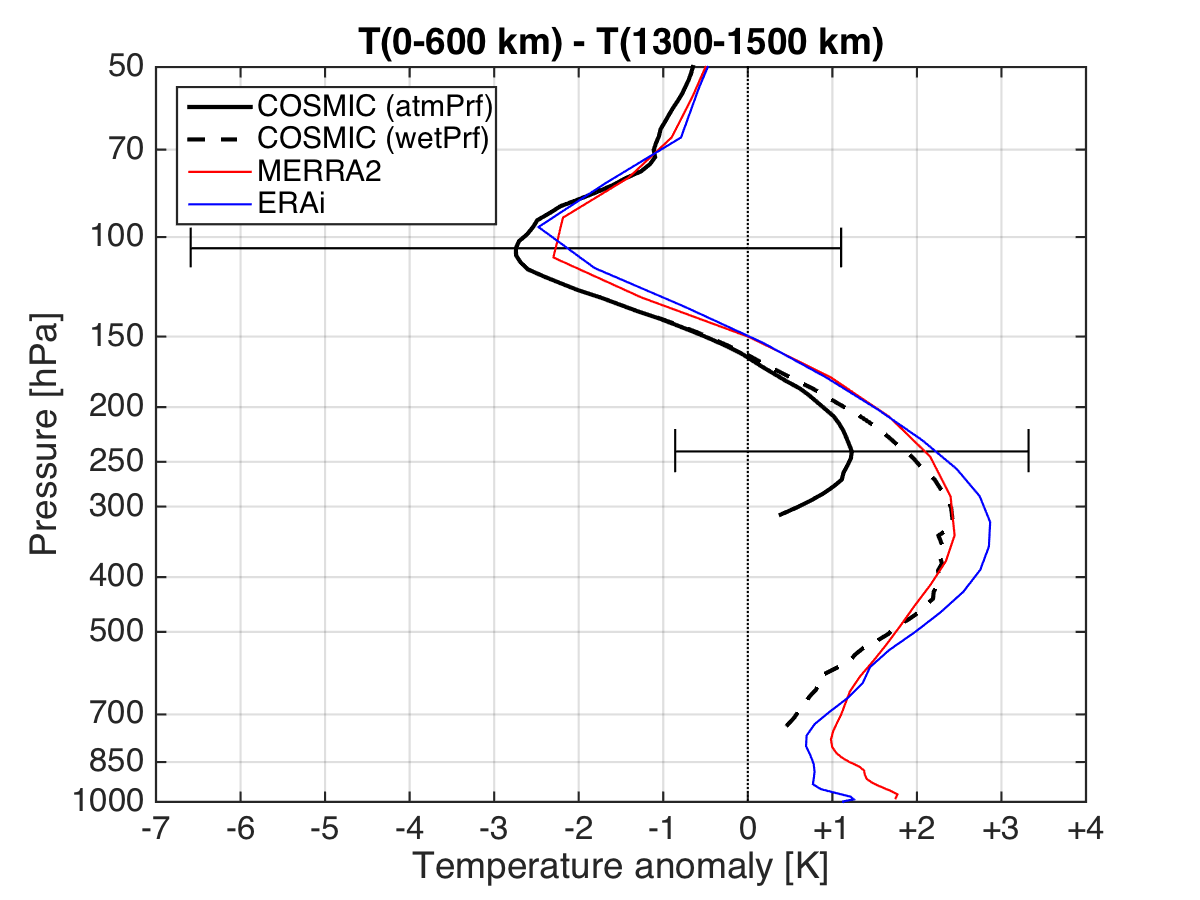