20 The 220GHz radar for cloud detection and experiment results

Abstract:The scattering characteristics of cloud particles can be achieved by space terahertz detectors, which can provide with the evidence for radiation transfer and inversion of cloud parameters. Cloud particle scattering modelings are simulated in 35GHz, 94GHz, 220GHz and 340GHz using the DDA algorithm, which is the foundation of terahertz wave detection. In order to get experimental data, the 220GHz imaging system is designed and realized with stepped frequency coherence technology, then an experiment has been done in a foggy room, which shows the function is very sensitive between the cloud particles and the illumination of terahertz waves.

Terahertz Imaging technology is actively being developed in response to the demand for space applications in recent years.Â  The Cloudsat radar of NASA and The Earth-CARE radar of ESA both used the working frequency of 94 GHz, and a 215GHz pulse radar was designed to detect atmospheric particles in the USA. When the general atmosphere in the presence of particle size and detection wavelength close to the detection signal, it will be significantly changed. More importantly, many of the band within the characteristic absorption line of the molecule can be used to detect a specific kind or atmospheric trace phase component, such as water gas, ice clouds, ozone, etc.

The paper introduces the 220GHz radar system, simulating the curve with different frequencies such as 35GHz, 94GHz, 220GHz and 340GHz, the scattering characteristics of cloud particles scattering. At the same time, taking the foggy room experiments using the system.

The design of 220ghz radar system

The block diagram of the terahertz radar is shown in Fig. 1. The 220GHz stepped frequency pulse imaging system consists of five modules, signal sources, front-end, IF module, signal process and antenna. The transmitting channel and the receiving channel are coherent. The system is shown in Fig.2.

The simulation results for cloud particles scattering with different frequencies are shown in Fig.3. Which shows the 220GHz wave is available for particle backscattering. 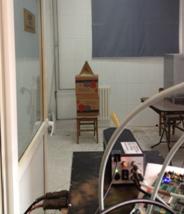 In order to verify the performance of terahertz radar system using target detection experiment in cloud environment. Due to the large metal target chamber environment is not conducive to separate target detection in cloud chamber, the experiment is only completed with the analysis to detect the target echo intensity in the mist under the environment of qualitative terahertz systems. The experiment sense of 220GHz radar system is shown in Fig. 4. In a foggy room, the metal triangle reflectors placed in front of the 220GHz radar, increasing the water content in the chamber, the terahertz wave illuminates the reflector involved with different density cloud particles as shown in Fig. 5, then the echo data are collected. The experimental set is shown in Fig.4, and the result is shown in Fig.6, with the particle density is bigger, the echo became weaker.

The 220GHz radar system in a cloud environment is carried out on metal target detection. The visual data is still the echo of the metal object, this dissertation discusses the THz radar, is a terahertz wave to the cloud effect, getting the reflectivity of cloud particles. So the experiment is verified qualitatively under the environment of cloud attenuation of terahertz wave, while it is unable to obtain THz reflectivity of water mist.

This paper has demonstrated the 220GHz radar for cloud detection including the system design, simulation of cloud particles scattering, the foggy experiments. The experiments is only verified the THz wave have attenuation in the mist environment, but still can't get the quantitative interaction results between THz wave and cloud particle. While terahertz radar foggy experiments lay the foundation for THz cloud detection.