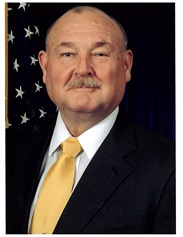 Thad Allen, Executive Vice President, Booz Allen Hamilton is a leader in the firm’s business at the Departments of Justice and Homeland Security focusing on emergency management, critical infrastructure protection, cyber security, emergency communications, and maritime security. He is a national thought leader in homeland security, maritime policy, law enforcement and national resiliency. Known for his expertise in bringing together diverse parties to address major challenges and create unity of effort, Mr. Allen completed a distinguished career in the US Coast Guard as its 23rd Commandant in 2010. Mr. Allen’s crisis leadership experience includes responses to the Deepwater Horizon oil spill in the Gulf of Mexico, Hurricanes Katrina and Rita, the Haitian earthquake, and port security operations in New York Harbor following the September 11 attacks. He is a Fellow in the National Academy of Public Administration and a Member of the Council on Foreign Relations. Mr. Allen also currently serves as a director on the Coast Guard Foundation and Partnership for Public Service. He is a 1971 graduate of the US Coast Guard Academy. He holds a Masters in Public Administration from The George Washington University—from which he received the Alumni Achievement Award in 2006. He also holds a Masters in Science from the Sloan School of Management at the Massachusetts Institute of Technology.