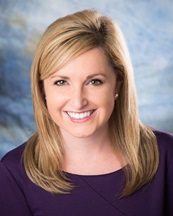 Maureen McCann knew she wanted to be a broadcast meteorologist since the age of 4 when Hurricane Gloria blew through her New England hometown. So, it's fitting that Maureen has landed in Florida, since it was a hurricane that sparked her interest in weather in the first place. Maureen is currently the weekday morning meteorologist at News 13 in Orlando, the 24-hour Bright House Networks station serving Central Florida. Originally from Arlington, Massachusetts, Maureen graduated from Cornell University with a B.S. in Atmospheric Science. Her TV career has taken her around the country starting in Bangor, Maine, followed by stations in Syracuse, NY, Austin TX, and Denver, CO. It was in Denver that her storm chase adventures with the late Tim Samaras and his research group TWISTEX transformed into a 30-minute special, "Tracking Twisters," which was honored with an Emmy Award and a Colorado Broadcasters Association award. Maureen is an AMS Certified Broadcast Meteorologist and served 5 years on the AMS Board of Broadcast Meteorology. She has helped award the CBM seals to her peers and organize the annual Broadcast Conference. She has also been involved with the AMS Board for Early Career Professionals. This Annual Meeting marks the start of her term as AMS Commissioner on Professional Affairs.